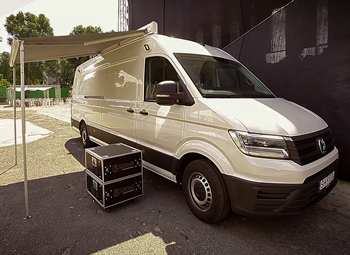 Michal Mika, the owner of 120dB Sound Engineering, realised that a dedicated audio van was needed as it became apparent that demand for his company’s services was growing rapidly. 120dB's business in eSports broadcast is strong - with regular broadcasts for Turtle Entertainment and ESL TV, and as the main audio provider for the Intel Extreme Masters Championships in Katowice. The music side is active as well, with large events such as the popular Męskie Granie Tour now part of the regular schedule. So it was logical to move from lengthy set-ups with lifted-in kit to a fully mobile solution that offers a consistent, controlled monitoring environment.

With the S300 you can move every channel strip wherever you want it, and the touch screens are very responsive - great for fast, responsive EQ control.
Michal MIka, 120dB.

The choice of console for ST1 was informed by a number of factors, and Mika says that the Dante Audio-Over-IP networking infrastructure was one of the biggest: "I have enjoyed using Dante with other consoles and other equipment for two or three years now," he explains. "Particularly on the eSports events... I've tried working on other consoles in IP environments - I don't like the alternative IP-based systems as you have to be an IT engineer to set up connections. That's too difficult and takes too much time for a sound engineer in a high-pressure situation.

"Also Dante is much better value - you don’t need to add expensive audio routers and that kind of thing to get a big, flexible system." 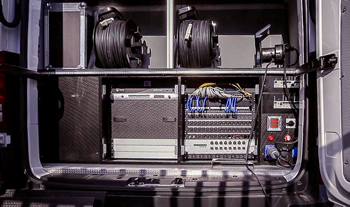 Ready to deploy - the rear doors of ST1.

He also values the reputation of SSL and the confidence it inspires: "It's easier to sell a service if we have a brand like SSL onboard," he says. “And you have a very good distributor in Poland with Audiotech. I always go back to them.” The ST1 Sound Truck was built by Studiotech Audio Visual Engineering.

The 32+1 fader S300 control surface is a new addition to the System T range of network devices, and is a fixed-format, network-connected console with two large multi-touch screens and a smaller FX Rack viewing screen for metering tools and more. 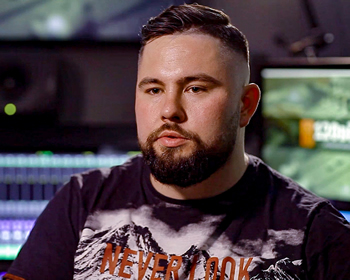 This set-up works well for the regular eSports work, with one box backstage for wireless mics and IEM returns, one for the Shoutcasters' area, one for the Analysis / discussion area, and one for the production area, bringing signals from the computers and to the intercom system. It also means that 120dB has a total of 128 mic/line inputs, 96 analogue outputs, and 32 digital I/O available for more complex music events and festivals. 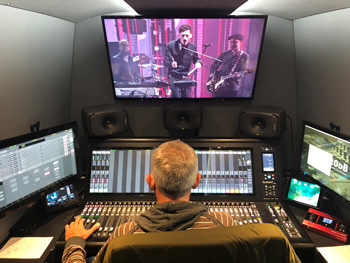 System T in action, in ST1.

In action, the S300 control surface suits Mika and his engineers, simply because it can be whatever they need it to be: "The controller is fantastic for us," he explains. "When I'm mixing I like simplicity. With the S300 you can move every channel strip wherever you want it, and the touch screens are very responsive - great for fast, responsive EQ control."