Massachusetts, US - High Energy US punk rock band Blink 182 is currently on an international tour following the introduction of its new guitarist and vocalist Matt Skiba, and the release of the new California album. Jason Decter, Front of House Engineer for Blink 182 for the past eight years, has chosen the new SSL L200 Live console - supplied on the EU leg of the tour by PA systems specialist, SSE Audio Group, and in the US by Hi-Tech Audio via Rat Sound Systems - for the job of bringing the band's particular mania to the PA.

I'm digging the channel gate and the filters in the L200; they are so precise. I can notch out the cymbal bleed and get a direct-source sound without compromising the sizzle in the mics.
Jason Decter

Blink 182 is a three-piece band that, according to Decter, "Fits nicely into 36 input channels... the drum kit, bass guitar, two vocals, and some playback tracks." It’s not a huge input list, so getting the kind of power and vigour that Blink 182 is known for from the stage to the audience, while keeping its edge, requires magic from all sides. Of course, the band itself plays the biggest part: "Everybody is working hard to fill the spaces, all the time," says Decter. "Travis, for example, plays so fast and hits like he's a machine - he never stops. He's constantly filling the space.

“Of course, with that comes the challenge of the dynamics in the tom mics, the delicate blend of the snare, and so on. You don't want to hard gate anything because one minute he hits it really hard and the next he'll be really delicate - like a soft roll or that sort of thing. For that, I'm digging the channel gate and the filters in the L200; they are so precise. I can notch out the cymbal bleed and get a direct-source sound without compromising the sizzle in the mics.

"Also, the new version 4 software for SSL Live has the Submonix processor in the effects section, so I use that on the kick to fatten it out... And I use a lot of parallel compression."

Submonix generates up to four independently filtered bands, each transposed to one octave below the original signal and mixed back in to underline and enhance elements like kick drum and bass instruments.

For parallel compression, Decter uses the versatile SSL Stem Group, which has a full processing path and flexible input and output options. In this instance, Decter can use stem groups as auxes that don't require a return and set up multiple dynamics paths, as well as inserting many processors from the console's internal effects rack. "The only thing I'm using auxiliaries for is my sub feed for my sub aux. Everything else is on Stems. There are 24 Stems available on the L200, and I'm using them all!"

The only outboard that Decter is taking with him is his favourite reverb processor for lead vocals. Everything else is inside the console - a combination of the 48-slot internal FX rack and the full-featured standard processing path.

Decter’s approach to the California tour is significantly informed by the sound of the new album - giving the audience something they expect, but with a live twist. "I try to get as close to the record as I can with effects and delays and so on, but I layer the dynamics so I don't squash it so hard. That way, the kick drum still hits you in the chest... It's still a live show so you've got to feel something more… The audience is familiar with the sound, so I provide them with that, but leave a lot of energy in there too." 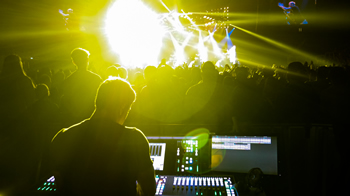 He attributes a lot of value in the responsiveness, accuracy, and low latency of the L200's signal path and processes. "I think the desk treats the audio more like a broadcast console would. My first impression was that it was incredibly smooth, but then when you get into it you find you can really fine-tune it with gates and filters. You can get a really warm sound.

"With a lot of desks I've used in the past, the filters would work okay, but never as true as you want... Then if you experience how a broadcast console interacts with the signal path you wonder why your live console doesn't do that. That is, other live consoles seem to mimic what's happening on stage... The SSL gives you what's really happening."