Boston, Massachusetts, November 7, 2022 — Emerson College, the premiere higher education institution advancing training in the arts and communication within the context of the liberal arts, has implemented a major upgrade of its broadcast audio capabilities at its downtown Boston main campus, which faces the Boston Common. Four television production control rooms are newly equipped with Dante-networked Solid State Logic System T digital audio platforms, each powered by a TE1 Tempest Engine offering up to 256-path capacity, that are variously controlled by an S300 surface and Tempest Control Rack (TCR) with Fader Tile and combinations.

Three of Emerson’s television production control rooms were built in 2003 and last upgraded in 2010, which included the installation of an SSL C10 HD digital broadcast desk. “We were so pleased with the C10 that we wanted to stick with SSL,” says Tim MacArthur, Director of Technical Operations for Media Technologies and Production (MTP), the department that oversees the use of the industry-leading equipment, production facilities and post production centers at Emerson College. 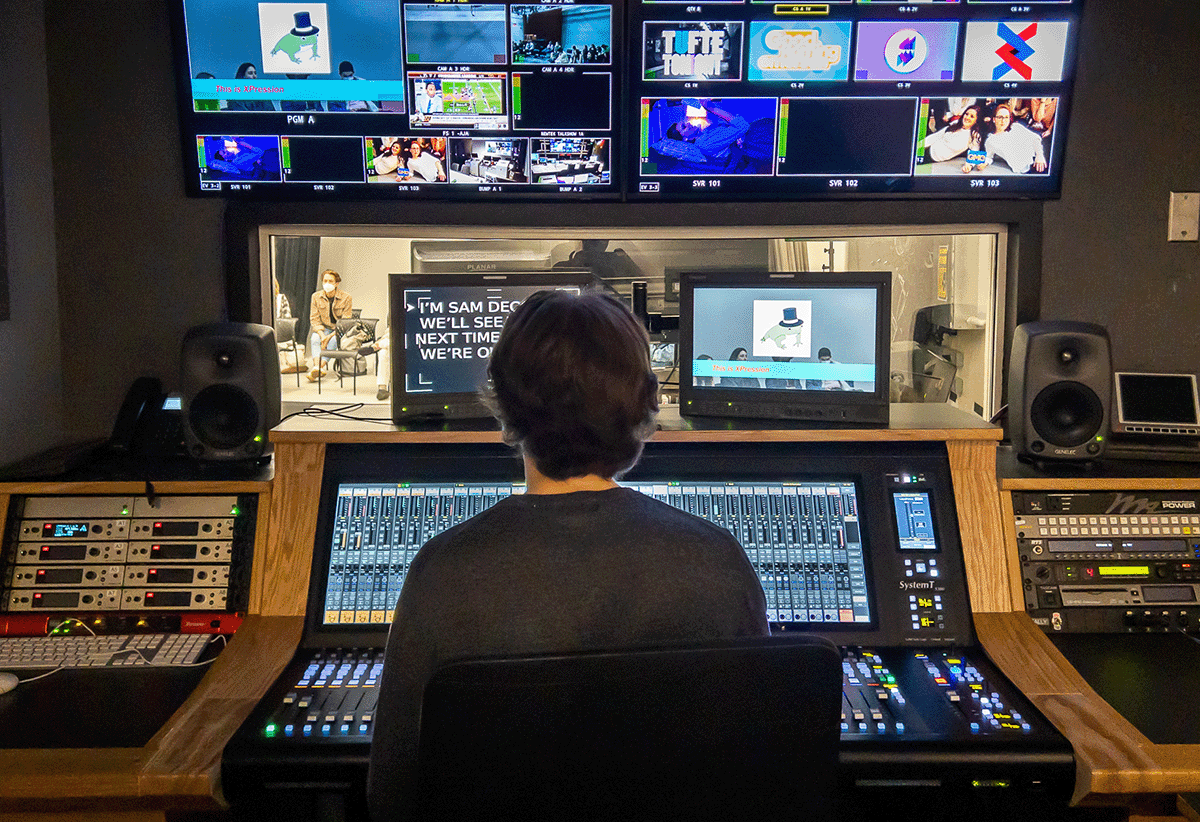 An SSL System T S300 surface has replaced the C10 in the Audio A Suite, the audio control room for the Di Bona Television Studio — named for famed television producer Vin Di Bona, an Emerson alumnus—on the eighth floor of the Tufte Performance and Production Center (PPC). The 11-story, 80,000-square-foot Tufte PPC was completed in 2003 and was the first purpose-built structure designed and built for Emerson College.

“We wanted to increase the flexibility of pooled resources among our facilities, and this summer we embarked on a complete central machine room initiative,” MacArthur reports. “Previously we had three disparate machine rooms for our facilities, but wanted to consolidate, so we invested in new fiber to make that happen.” The Tufte Television Studios are now interconnected with the nearby Journalism Production Center, Emerson Television Channels, Bobbi Brown and Steven Plofker Gym and Cutler Majestic Theatre. 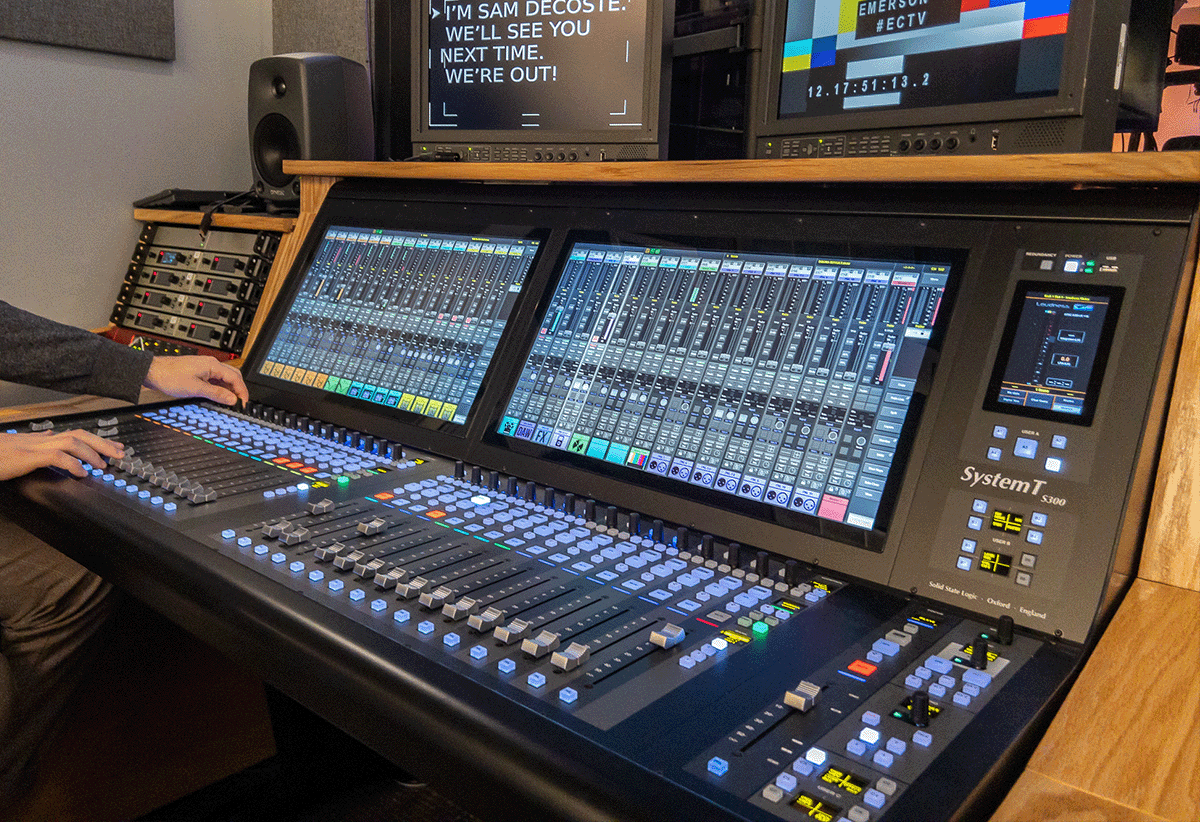 The power of the System T platform

He continues, “In addition to the SSL components, we replaced the core Evertz router, installing a Dante hub, which brings our embedding, de-embedding and more into a Dante world for System T to pick from. Using Dante with multicast was just such an appealing promise to us; being able to grab a mic from a preamp in one studio and bring it to a control room in another.” Systems integration for the upgrade project was provided by Diversified.

The native Dante workflow was just one attraction of SSL’s System T platform. “Of course, there’s the flexibility of the infrastructure that both Dante and SSL provide,” MacArthur adds. “And, the logic is intuitive once you wrap your head around the new world of audio routing. Plus, the power of the effects processing on every channel is just phenomenal.”

In addition to Di Bona Television Studio A, the Tufte Television Studios also includes Teaching Studio and Control Room B, a classroom inside a standard television control room, where the audio facilities now incorporate a System T TCR with a Fader Tile control interface. SSL’s TCR is a 3RU PC enclosure that runs the complete System T control software—essentially, a System T mixer in a rack. The mixer may be operated from a 15.6 -inch touchscreen or a Fader Tile, which is a hardware controller that offers 16 motorized faders and comprehensive status LEDs and provides fast access to 960 paths via dedicated Layer and Bank buttons. 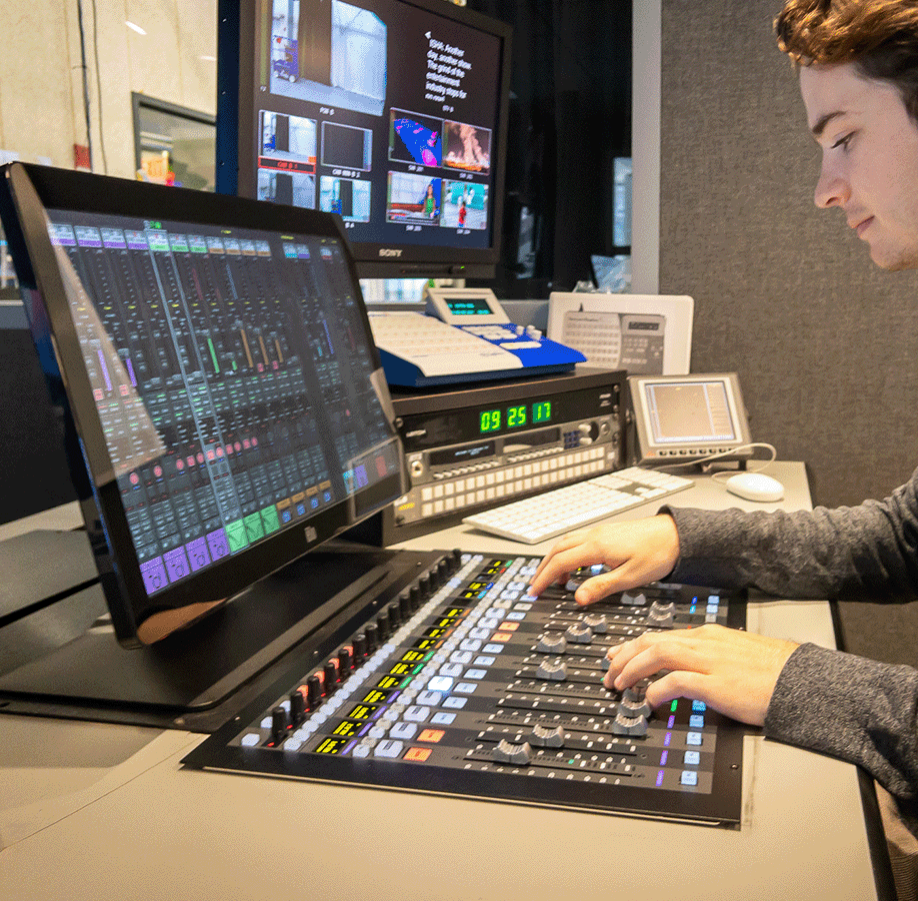 Upgrades for a new generation of broadcast audio

“What’s interesting for us, with the generation of students that we have now, and especially with the TCRs, is the touch screen option,” MacArthur says. It’s second nature for a generation that has grown up with constant access to personal electronic devices to control a complex platform such as System T from a touch screen. “So many of our students will intuitively grab a ‘fader’ with their finger and slide it,” he says. “It’s a very elegant display.”

As for the physical controller, MacArthur expects the build quality to withstand the constant use and abuse: “The Fader Tiles are so well constructed. We’re optimistic about their durability with novice users.”

The second of the three SSL System T Fader Tile and TCR systems has been installed at the control room and studio facilities in the Journalism Production Center, also built in 2003 and updated in 2010, which is located on the sixth floor of the Walker building, adjacent to the Tufte PPC. “It’s largely instructional, so we’re teaching journalists and producing daily newscasts, whether they’re self-contained as a course resource or posted online,” he says. 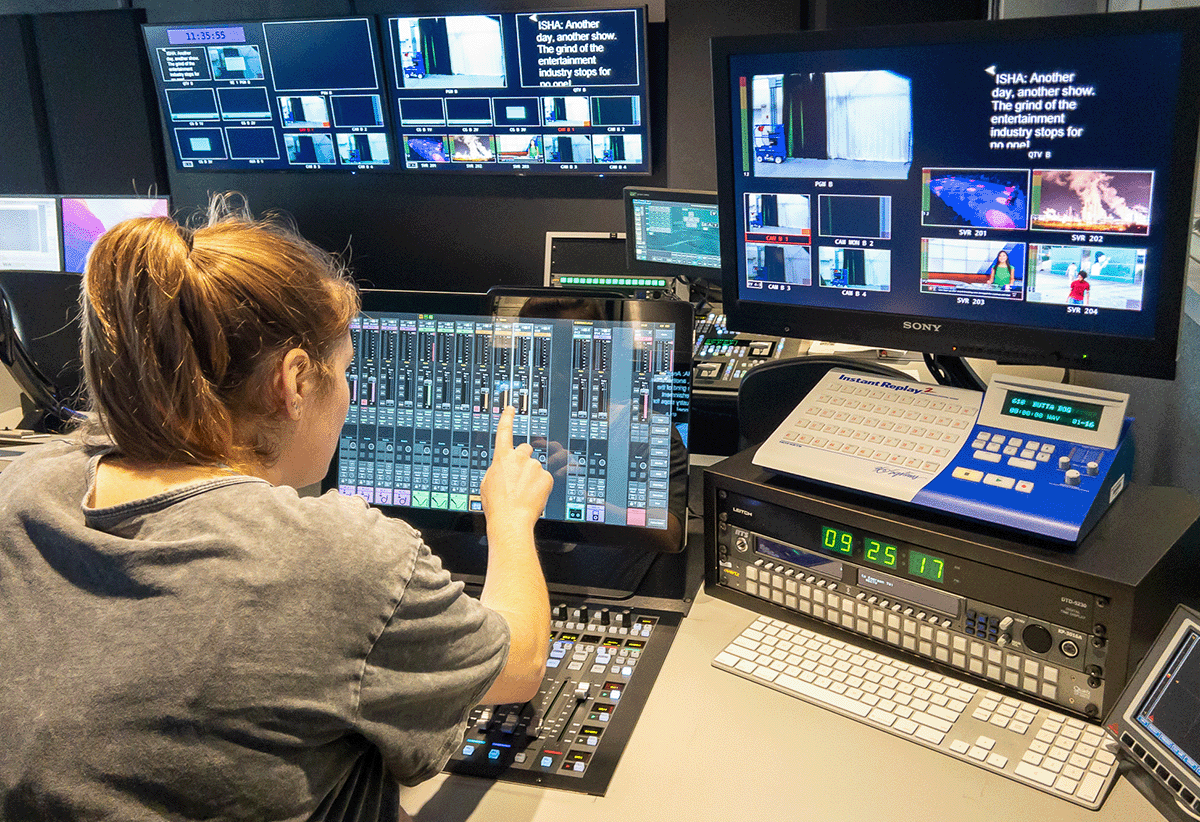 The third Fader Tile and TCR combination has been integrated into a control room in the nearby Bobbi Brown and Steven Plofker Gym to support live coverage of Emerson College’s men’s and women’s basketball and volleyball games. The onsite mix control system is networked to its TE1 Tempest Engine in the central machine room in the Tufte PPC.

At the Tufte Television Studios, the spacious Di Bona Family Production Studio A, measuring 40 feet by 43 feet and offering audience seating, enables students to produce a wide variety of programming using the SSL System T platforms available there. The diverse productions set students up for careers in the real world. “We have a weekly Good Morning Emerson television show that’s modeled after a regular morning show. We’ll have live bands, soap operas, sitcoms,” says Antonio Ascenso, Director of Production Facilities, Media Technologies and Production. “If you can think of it, we’ll do it.”