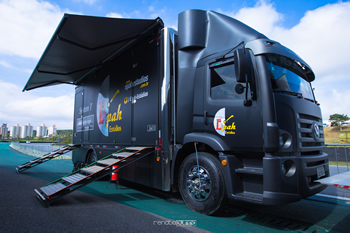 The new Epah UMA-5 SSL truck from the outside. Photograph by Renato Guirra

Epah Estúdios provides live mixing, recording, and production, services to the Brazilian broadcast industry, as well as pre / post production and authoring of DVDs and CDs. Its main client is Globosat, a leading multichannel cable and satellite TV service, and subsidiary of Grupo Globo.

Epah has been a major production force in the largest Brazilian music events, such as Rock in Rio, Lollapalooza, and Monsters of Rock, and provides all audio services for the Prêmio Multishow de Música Brasileira (Multishow Brazilian Music Awards), including sound reinforcement and broadcast sound.

We needed something different, something new in the broadcast world. We wanted to put the best sound and the latest technology to work for us - to make a leap forward.
Marcelo Freitas

Marcelo Freitas, Technical Manager at Epah, explains that before settling on SSL's System T for the UMA-5 truck they already had a notion of what they wanted, and the place they wanted it to occupy in the market place: "We needed something different, something new in the broadcast world. We wanted to put the best sound and the latest technology to work for us - to make a leap forward." The move to SSL was then fully endorsed by Epah CEO Marcio Schnaidman, who had always had aspirations to bring SSL consoles to the Epah Estúdios line-up.

UMA-5 now has System T at its core. The main control surface is a three-bay, 48-fader S500, connected to dual redundant T80 800-path Tempest audio engines, with Dante I/O connected to primary and secondary (redundant) Ethernet networks via COTS 52-port Cisco switches in the truck. There are two stage racks available, each with three SSL Network I/O: SB.i16 and two SSL Network I/O SB 8.8 stageboxes, with dual redundant Ethernet connectivity. This gives a total stage capacity of 128 inputs and 32 outputs. Additional Dante I/O from a range of manufacturers is available on the truck, as are two SSL Network I/O: MADI Bridge units, for interfacing existing MADI infrastructure with the Dante Network. Eduardo Pinter, an engineer at Epah, notes: "We use Reaper for recording. We normally record 128 channels, and that's connected to the audio network as well, via a Dante PCIe-R sound card.”

News of the UMA-5 SSL truck spread quickly, and it has been in popular demand for a variety of applications since it was built. "Our experience with System-T has been incredible," continues Pinter. "Not only with live broadcast, but also for DVD recording projects. As soon as bands found out about our new truck, powered by an SSL, they started asking for that vehicle specifically - for all their concerts." 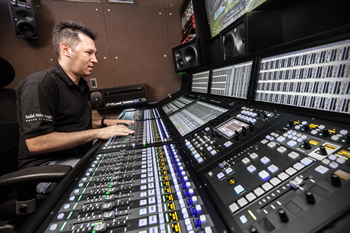 For Pinter, one of the main challenges of an event like this is getting bands to trust Epah with discrete channels, rather than simply sending them a complete mix from Front of House. “I understand their concerns,” he says. “But we try to explain the advantages, show them our truck, and convince them of the care we take over the final result.

"For Lollapalooza, the first response from most bands was that they would only send us their final mix. However, when they saw the SSL truck, most of them changed their minds! Some of the bands’ engineers even joined us in the truck. For example, Bella Blasko joined us while The National were on, giving us tips and helping with the mixing process. She loved both the console and the final result!”

While it’s true that System T brings a lot of technical and creative details to broadcast and mix engineers that set it apart from the crowd, for Marcelo Freitas, the bottom line was a blend of sound quality, and client faith in the brand and its technology. “Our main concern is to make everybody happy," he says. "That includes the bands, the TV company, and the audience... The new SSL truck, our own reputation, and a final result that is always more than incredible make an amazing combination.”