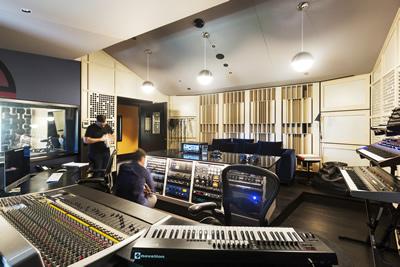 Forbes Street Studios, designed by Michael Fronzek of Sound Spaces, is located in the recently gentrified Woolloomooloo suburb of Sydney - now a developing magnet for creatives and foodies from all over the world. The facility is open to all-comers, not just Universal Music artists, and has a clean, modern look and feel that sits well with its useful mix of production and media rooms. As well as the SSL Room, there's the 45-square metre Live Room, the inspiration-ready Writing Room, the video-savvy Edit Suite, and the broadcast-friendly Interview Room. "The SSL Room is the centre-piece," says Anthony Garvin, the Studio manager at Forbes Street and Mix Engineer / Producer. "That's got the AWS 924 console and Barefoot MiniMain12 monitoring... The Live Room has very neutral acoustics and lots of natural light. We can comfortably cater for at least ten players, depending on the type of ensemble, and you can get great recordings of almost anything in that space.

That shows the flexibility of the console... Everyone is doing the same thing in five or six different ways, and everyone gets a result out of it.
Anthony Garvin

"I think the Writing Room is modestly named. It's got lots of interesting gear in there, and most recently has been used for the vocal recordings and mixing for The Voice Australia... The Edit Suite has all the Audio-Over-IP gear for radio interviews, and it's got Media Composer, Adobe Creative Suite, Pro Tools, and so on. So it’s great as another small writing space, for recording from the Interview Room, or for video editing jobs, for example."

The Interview Room is set up like a round-table radio interview studio, with windows overlooking the busy William Street - a main route in and out of the Sydney Central Business District. "A few weeks ago, Universal was hosting a media day for The Voice Australia," relates Garvin. "They had Boy George, Seal, Kelly Rowland, and Delta Goodrem all in the building, and for part of the day they were doing AoIP radio pre-records with stations around the country, from the Interview Room.... So it allows any artists and clients to fulfil media obligations, without leaving the building, which can be very useful."

The studio's new SSL 924, with its hybrid analogue approach, combines an SSL Total Recall, SuperAnalogueTM console with comprehensive Ethernet-connected DAW control, and the new δelta-Control DAW-based automation technology. "We were looking at a few different consoles - all the ones you can imagine around that price point," explains Garvin. "Several techs that I know and trust all said 'yes, go for the AWS'... In their experience, it was the most reliable console, and I was worried about going too 'boutique': You just don't know how much support you're going to get maybe five or ten years down the line. 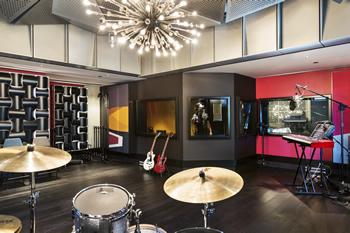 "Of course, everyone loves the pre-amps... We've got quite a few outboard units, and they have been used, but everyone has been very happy with the console preamps.

"Also, you can step in front of the AWS and figure out 95 percent of it within about 90 seconds. All of the Engineers coming through the facility have enjoyed that experience... even though they all seem to use it differently!" 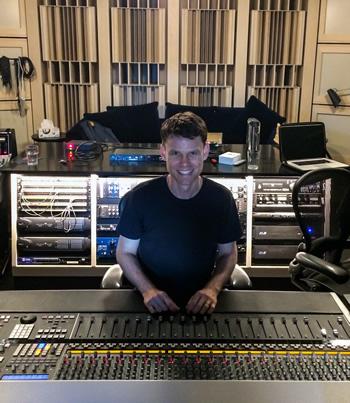 This aspect of the AWS - the flexibility to allow operators to work their own way - is something that has emerged at Forbes Street as the client list builds. Garvin: "For monitoring while tracking, for example, some will return just a stereo track from Pro Tools, others will send to Pro Tools from the insert sends and use the insert returns like tape returns, others will split the board and use a few channels on the mix bus and have Pro Tools come back from there while using the record bus for the recording inputs, and others simulate an inline setup by using DAW control layer to mimic the tape returns - even though they are just control faders.

"That shows the flexibility of the console... Everyone is doing the same thing in five or six different ways, and everyone gets a result out of it."

Garvin estimates that studio use so far has been around 75 percent straight recording and writing sessions, with the rest being other media bookings, like radio interviews, album launches, showcases, and so on - including the recent Cannes Lion 2017 award winning AirNZ campaign featuring musician Ronan Keating and actor Julian Denison. And after only six months in business, the Forbes Street Studios' satisfied client list is already a healthy roster of the great and the good, including Shawn Mendes, Vera Blue, Tigerlily, Gregory Porter, and lots more - a creative work load that doesn't look like slowing any time soon.