Despite a year that has been badly affected by the Covid-19 pandemic, Guildhall has delivered a successful program of education, performance and remote broadcast with the installation of SSL’s System T production platform and ORIGIN analogue studio console.

London, UK, December 16, 2020 — The Guildhall School is a vibrant, international community of young musicians, actors and production artists situated in the heart of the City of London. Ranked as one of the top ten performing arts institutions in the world (QS World University Rankings 2020), the School is a global leader of creative and professional practice which promotes innovation, experiment and research, with over 1,000 students in higher education, drawn from nearly 60 countries around the world.

It’s one of those establishments where, despite its age - and the school was 140 years old in 2020 - it’s not surprising to find cutting edge equipment such as the award winning digital broadcast System T platform and the last analogue ORIGIN studio console in place, and working in unison. What is perhaps surprising is the sheer degree to which they are being driven — “We’ve got 72 live broadcasts taking place between now and the end of year,” comments the School’s Head of Recording and Audio Visual, Julian Hepple speaking in mid-October — and to find a state of the art Dante network threading all of the School’s performance rooms together with the System T S300 console sitting at its heart. 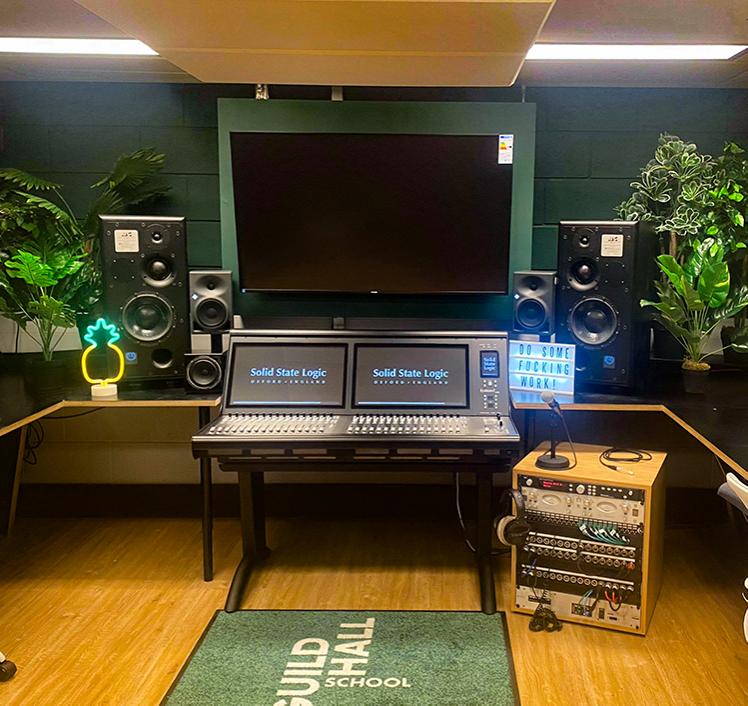 “We have two main campus buildings that are directly across the road from each other and within the school there are six large state of the art performance spaces built six and seven years ago: a concert hall, theatre, studio theatre, Music Hall, opera theatre, and so on,” explains Hepple. “System T gives us access and lines from each one of those performance venues and 24 classrooms as well. We've got a big Dante network that sits alongside a big NDI video network as well, to allow us to pull in and out of any room we want to and push anything anywhere, as well as do big multi-channel records and all that kind of stuff. 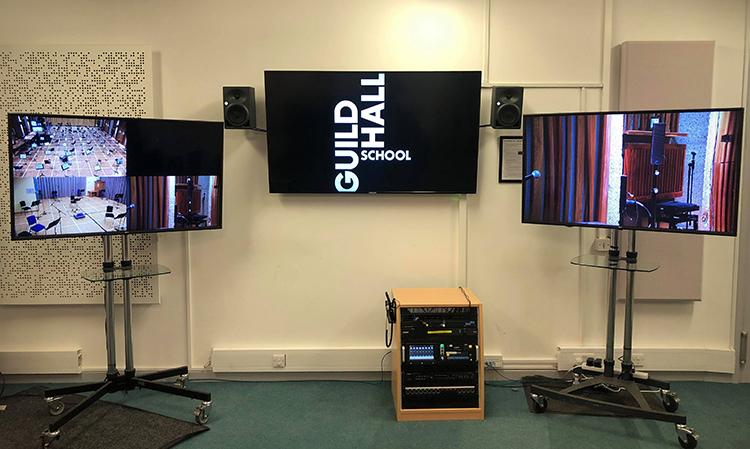 “As a result at the start of term we were able to deliver the country's first full scale, socially distanced Symphony Orchestra, with 94 musicians in four different rooms, linked together by System T, who can all see a conductor on-screen via the NDI video network, as well as a multi-view of all the other rooms. I think we’re the only people doing that.”


Fast turnaround in the face of adversity

Hepple jokes that the School has effectively turned into a video production company, but also points out that it has managed remarkable things in the teeth of a global pandemic that has shuttered many institutions around it. That includes running its Gold Medal competition, which didn’t stop for either World War and counts the likes of Sir Bryn Terfel, Tasmin Little, and Jaqueline DuPré among its previous winners. And a lot of that is down to its System T installation and the way that it has helped the School navigate the problems that the need for social distancing can cause. 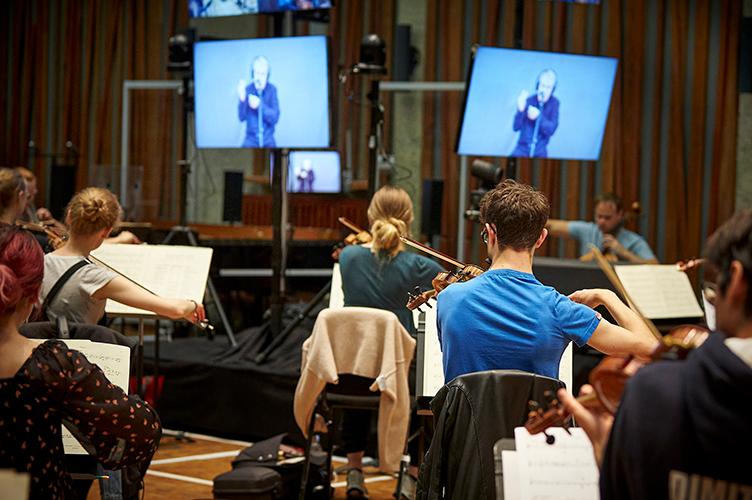 The School shut earlier than most at the start of the year which gave it an early insight of what it would need to do.

“That’s when the initial plan for the project came about and part of the reason I got the funding for the project was because I said I think we can still have the Gold Medal this year and we can use this technology to keep going though pretty much everything,” says Hepple.


Hepple is a two-time Grammy nominated Producer / Engineer, and through his wealth of contacts pulled together what effectively amounts to a DIY installation of the new system. Liam Halpin from Datasound Consulting put in the Dante, Guildhall engineer Sam Ziajka was responsible for networking, and the project was managed by Dylan Bate Project Management. It was a two day install by SSL followed by a further two days of training, and the team has been doing two gigs a day since the start of September.

“We hit the ground running and we were off,” he says. 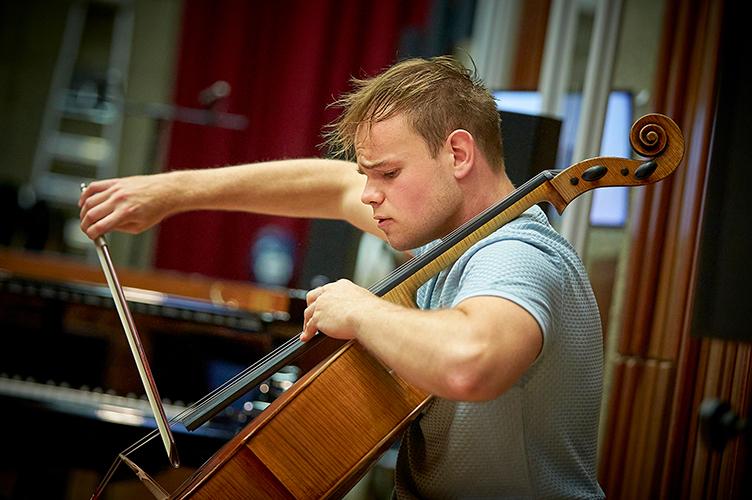 The best of both worlds: digital & analogue

The full kit list that went into the School over those truncated few months is headlined by its 32-fader S300 console supported by a T25 Tempest Engine, and, in terms of IO boxes, a “bunch” in Hepple’s words of SB 32.24s, an A 16.D16, and an A32 stagebox that sits in front of an analogue SSL ORIGIN console used primarily for jazz recordings and which sites it on the Dante network. “And then we've probably got 70 or so non-SSL Dante devices that sit on there too,” Hepple says. “All our little classrooms have little rack mixers in them basically with a Dante card in the back. And we've got a whole bunch of two channel in / two out Dante little no-tricks boxes that we can go and throw in a room. 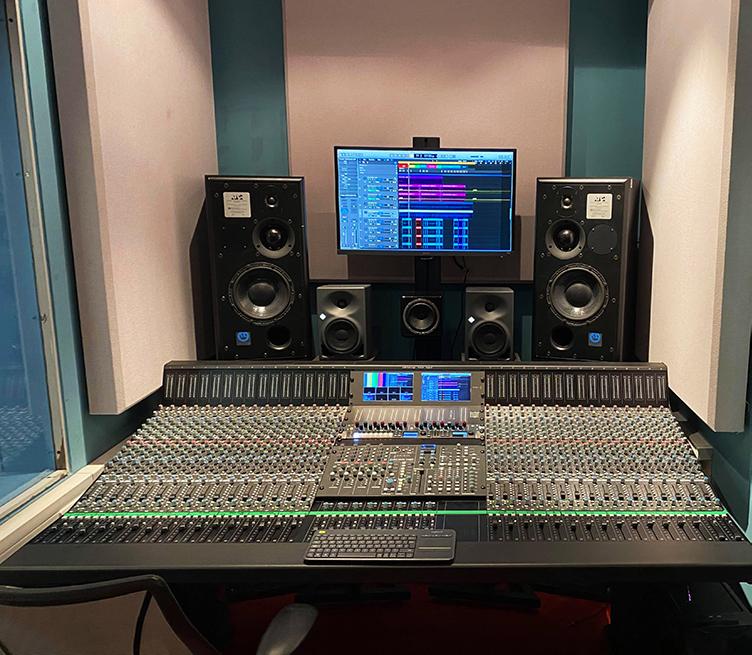 “The ORIGIN allows me to teach students in a totally analogue workflow in there, so I can teach them proper gain structure and signal flow and all that kind of stuff,” he continues.


“So in one building we have this absolutely glorious SSL analogue environment. And in the other building, we've got this equally glorious SSL digital setup. And the link between the two of them is just brilliant for us; it’s just really flexible.”


That flexibility has been the key to some of the School’s achievements in the past few months, with one of the biggest impacts being made by the TeamViewer application on the S300 and the way it enables remote working.

“On the S300 I can sit and mix gigs from home,” says Hepple. “I've got a member of staff that's currently having to self-isolate, so they’re prepping all the show files and putting them on there. With a combination of wider access Dante networks, the S300 and a couple of streaming plugins, we can do stuff from anywhere, it’s absolutely brilliant. We had a big band gig last night and I mixed the audio from my home and one of my engineers vision mixed from his home. That’s fantastic.” 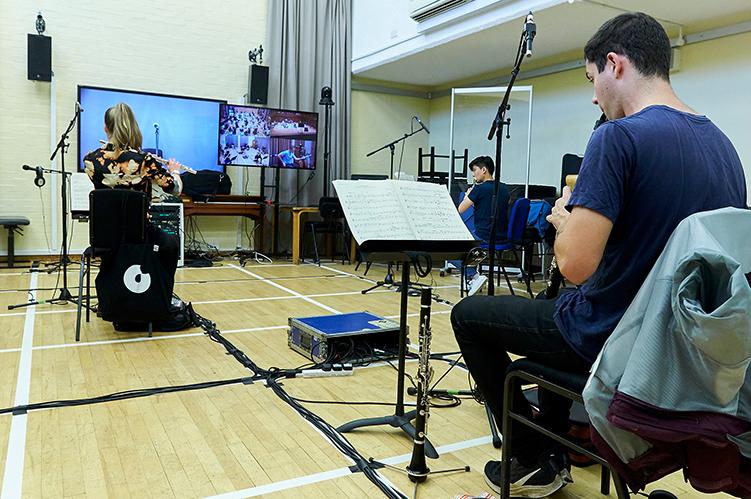 The socially distanced orchestra that has been set up at the School is a bit of a marvel of logistics that has been enabled by some very clever technology. 54 socially distanced strings sit in one room, with brass and percussion in another room, a 13-piece woodwind section in another (sitting three metres apart rather than the usual two due to the particulates that the players exhale), and so on.

“Our low latency network has allowed for meaningful large ensemble performance to continue - a vital part of our students development here at the school. We love it,” comments Jonathon Vaughan, Vice-Principal & Director of Music.

The key to managing a nigh-on 100-piece orchestra spread across numerous rooms is managing latency on the Dante fibre network that is threaded throughout the School’s buildings. 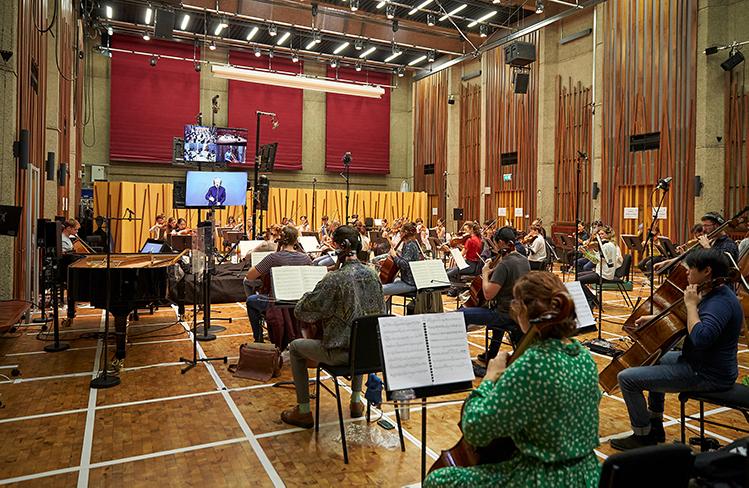 “I can get anywhere on site to anywhere else on site in six milliseconds audio wise, which is quicker than the real world,” says Hepple. “ If I am a conductor and I am 10 metres away from a trombone player at the back of the room, there’s a 30 milliseconds lag between them. If I put a close mic on that trombone player, I can get the sound in the headphones of the conductor before it would have got there in realtime. And because the audio is so quick, that allows me to catch up on the video side of things. The video side runs at about 100 milliseconds latency, so you just have to do some common sense things to accommodate that. I don’t have the conductor in the same physical space as any of the instrumentalists for instance, so we are never fighting against the real world speed of light for a conductor's downbeat; everyone’s getting the video at the exact same time.” 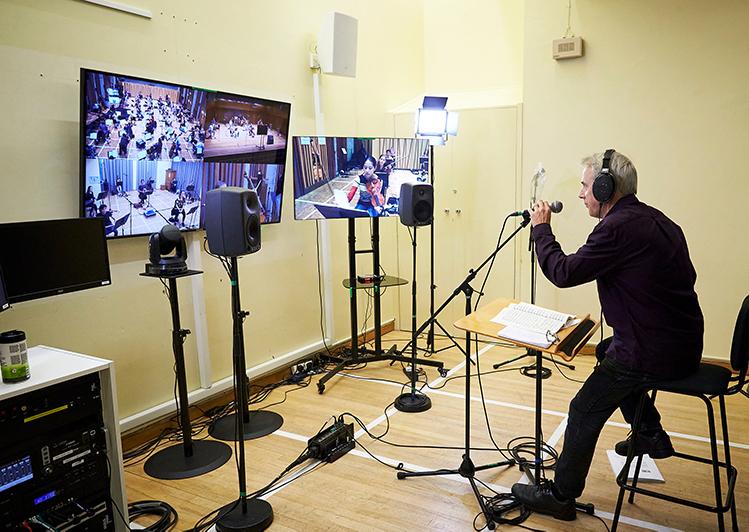 Six of the best

Overall the result is a tightly integrated and flexible audio production system that has enabled the School to function whatever has been thrown at it. And for young musicians that is vital. 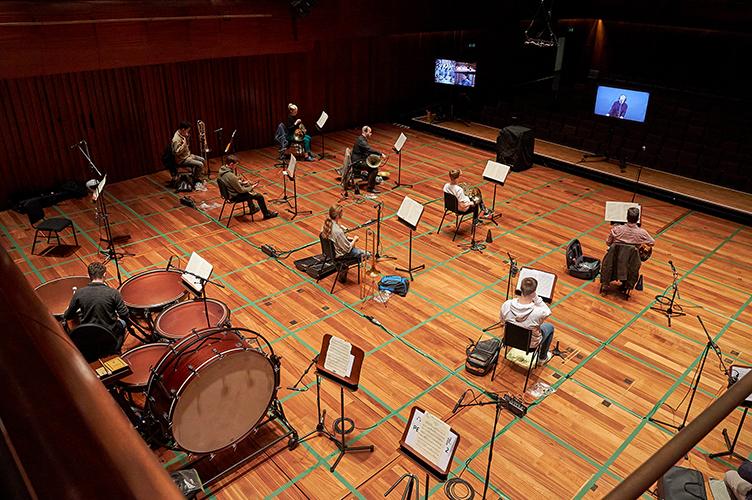 “It is brilliant it is for us to be able to integrate the ORIGIN with the System T via that A32 box, because being able to do our broadcast work from an analogue console is brilliant,” says Hepple. “And as a teaching tool for the students, it's brilliant. As well as all the multi-room stuff, the fact that we can just send stems of anything to a Mac lab, or to a specific student who's recording using an orchestra; they just open Logic and I’ve already mapped the inputs out through the Virtual Tie Lines, they just log in and there are their stems."


"Everything is self-serving. I can do three things at once now because it is all flowing and it’s like night and day in terms of what we can deliver to the students in terms of digital and blended learning.” 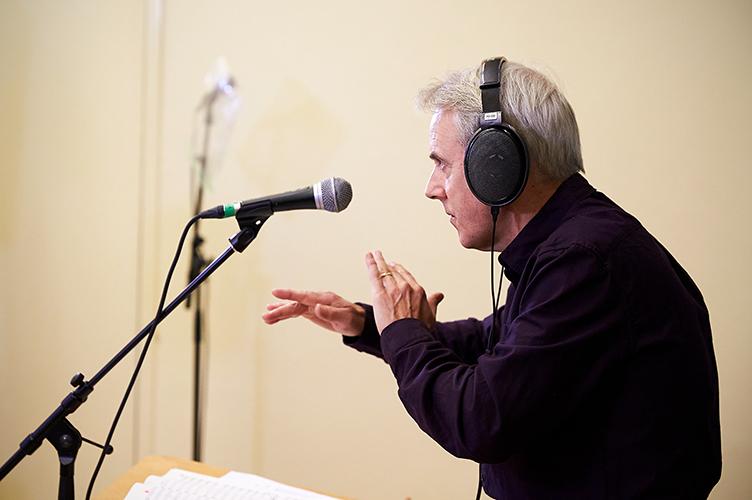 Plus, of course, there is the fact that he can swiftly switch between large scale jobs like that and other ones, managing them all through the S300. And now that every room in the campus is essentially a live room, that flexibility is key as the console jumps between different projects. 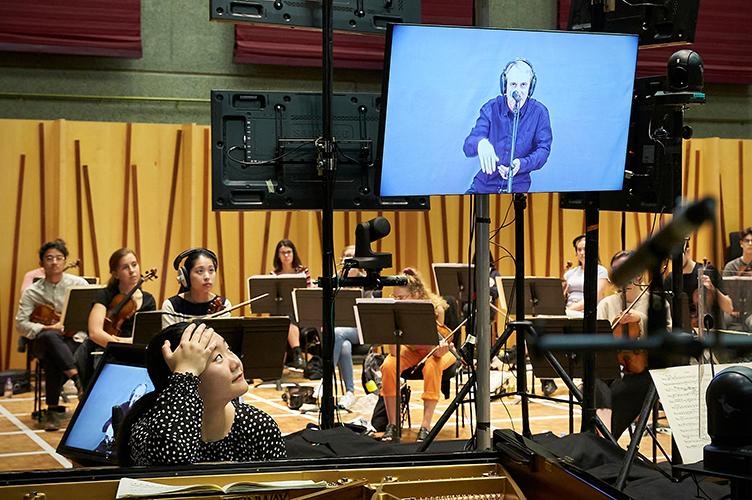 “We’ve learnt how to do the live orchestra now. At the moment I’ve got that event parked a few layers down on the S300, someone else is mixing a gig routed to another master output on top of it, and I'm remoted in from home. It's like having six consoles.”