Fusion and EV EQ are now mainstays at Legendary NYC facility: "SSL designs have always been the most flexible, in my opinion, and they are extremely musical."

New York, New York, November 15, 2022 — The Hit Factory / Germano Studios has expanded the audio processing options in its Lower Manhattan facility with the addition of a Solid State Logic Fusion analogue stereo multi-processor and an SSL UltraViolet EQ 500 series module in both of its control rooms. The facility, which features an SSL Duality δelta 48-input analogue console in both studios, is using the new outboard equipment for a variety of applications, including mix bus, stem and subgroup processing.

In 2021, says staff engineer Andrew Yanchyshyn, Joan Jett & The Blackhearts recorded a new project at Germano Studios which was subsequently mixed in stereo, Dolby Atmos and Sony 360 Reality Audio. “Those mixes featured the Fusion on every song,” he says. “I don’t think we could have mixed it the same way without the Fusion.” The band’s first all-acoustic album, “Changeup,” a 25-track collection, plus an exclusive eight-song Record Store Day 2022 LP, were released earlier this year.

Tasked with faithfully recreating the original mixes from the stems without knowing what processing was originally used, he says, “We were looking for something special to add saturation and sizzle and harmonic flavor — but because these were all hybrid mixes, we didn’t want to have to go back into the box. We really dug the HF Compressor and some of the EQ options, then we discovered that Fusion has this beautiful Vintage Drive section and we ended up using that on all the songs.”

Plug-ins can be great, he says, but there is no substitute for hardware circuitry. “We were also switching in the Transformer because that always added something magical to the sound. The one thing you can’t replace is having a real transformer,” he says.

SSL UV EQ: Packing a punch in 500 series format
“We also used the Violet EQ if we needed to add top end to something. That would give it an effortless lift without being aggressive. We were surprised when SSL released the UltraViolet (UV) EQ stereo 500 series module,” he continues, “because we were expecting a two-band EQ, but we were excited to see the extra two bands and the HP filter. So often people bring in instrumental stems that are lacking in some depth and clarity, so an EQ like that is really powerful.”

Yanchyshyn reports that he tried both the UV EQ module and the Fusion’s Violet EQ section on the same mixes. “I found both to be very effective on the mix bus. The HP filter and the high and low bands were great for tightening up a mix and getting it to feel big and powerful. But the mid-band on the 500 series module was very useful for carving and cleaning up instrumental stems. The mid bands are something new and are exceptionally precise. For mixing sessions this was very, very useful, particularly on modern sounds: kick drums, 808s.” 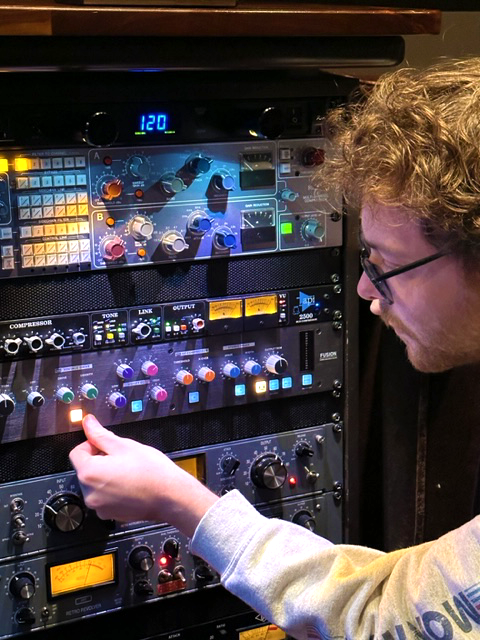 He adds, “The UltraViolet EQ is a great mix bus EQ, especially the one on the Fusion, because it provides a simple set of essential choices. The 500 series UV EQ is a bit more specific. I tend to place the Fusion as an insert on the console, post-compressor. Usually, the SSL Bus Compressor will be going. Combined with a little Vintage Drive, the UltraViolet EQ, some HP filter and the transformer, it’s really nice.”

On another recent project, Yanchyshyn says, “We were using the UltraViolet EQ on the subgroups of a horn section to bring some presence, warmth and brightness and it was really effective. The client was very happy. So the UltraViolet 500 EQ is great on those instrumental subgroups. When you need it to be aggressive it can do that, but it can also be very gentle as well.”

“Saturation was key for some of the drum and percussion layers where we needed a little extra energy and we had to be honest to the original. We used it on instrument subgroups; specifically, for percussion — cymbals, shakers, tambourines, hand drums, snaps — that we wanted to make pop out of the mix without adding extra volume or extra EQ. We literally turned up both saturation knobs — Drive and Density — all the way to the max, and that was the sound. With Density we were able to change the weight of the sound.”


He continues, “On the Fusion, I would also get into the habit of multing a vocal, throwing it into the Drive and cranking it to get something really gnarly. In general, if I am doing vocals, electric guitars and basses, they all sound phenomenal through that Vintage Drive section. Often, I will take an electric guitar subgroup and throw it to the Drive and blend it back in. Or I might take a bass while I’m tracking, if it’s more aggressive material, multi it, then send it to the Vintage Drive and bring it back in.”

Germano Studios opened in 2008 with twin 48-input Duality desks. “The SSL EQs have always been great because they are so flexible, Yanchyshyn says. “There are tons of other designs on the market these days, but the SSL designs have always been the most flexible, in my opinion, and they are extremely musical. So even if you use the UltraViolet EQ in a tracking situation, if you are being gentle with it, I feel like you can’t go wrong. Both our rooms have a UltraViolet EQ, which is important, because if we have a client that likes either the top or the bottom bands, or the HP filter, it’s good to have both these units.”

In short, Yanchyshyn says, both the Fusion and UltraViolet EQ have become mainstays at Germano Studios. “I really enjoy using both of them,” he says.