OXFORD, ENGLAND - Front of House Engineer Jim Ebdon (Maroon 5, Annie Lennox, Sting, Prince..) is currently on a world tour with Sam Smith following the release of Smith’s new The Thrill of It All album. To accompany him on the tour, Ebdon has chosen the Solid State Logic L200 console, supplied by Capital Sound, London.

"A lot of the new album was recorded onto 16-track analogue, and then moved onto Pro Tools." says Ebdon. "I love the feel of the album, and I love the sound of it, and I wanted to recreate that. So the SSL was a no-brainer... It sounds like an analogue console, and it has a Save button!"

The show itself has unusual staging, with the main stage projecting quite a way out into the auditorium, and PA system set up 'in-the-round' rather than as a traditional left-right system. Ebdon’s FOH mix position is to one side of the stage, facing a single line of D&B speakers, and has to pay particular attention to tonal balance, because of limitations on bass cab placement.

"We did four weeks of band rehearsals for this show, so I had time to fine tune mixes and hone instrument sounds. I was using the L200 as a recording console for some of it, so I could record mixes and play them back to the band.

"Once we got to our first arena for production rehearsals, those mixes translated really well onto the big sound system; I was really pleased with the sound quality and the way it all worked out." 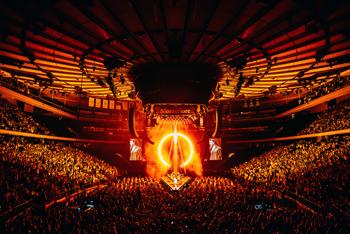 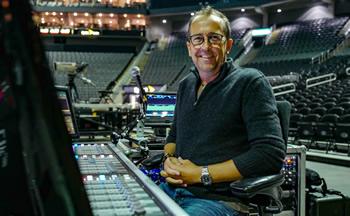