Manny Marroquin – One of the most in demand mixing engineers in the business – has worked with internationally renowned artists including Christina Aguilera, Mariah Carey, Beyonce, Ed Sheeran, Lady Gaga, Rihanna, SIA, Eminem, Alicia Keys, Taylor Swift, Jennifer Lopez, The Rolling Stones, Kanye West, and countless others. Based at Larrabee Studios in LA, Marroquin states that the iconic recording facility has been an SSL studio from day one – its most recent acquisitions being its second SSL Duality console .

Larrabee Studios has been a leader in the Los Angeles music industry for over 40 years, during that time hosting many of the leading artists from yesterday and today.

Originally owned by pop lyricist, Gerry Goffin, and his wife and songwriting partner/singer, Carol King, the studio was purchased in 1969 by the Mills. By the late '70s, Larrabee had grown into one of the first SSL studios in the country. The Mills’ son, Kevin, acquired ownership in the mid '80s, and reformatted the space and the equipment to compete with the best studios in the world.

In 1991, Larrabee North (now Larrabee Studios) was born when Kevin purchased a studio in North Hollywood from famed record producer, Giorgio Moroder. The first major project at the new studio was none other than Michael Jackson's eighth studio album, Dangerous.

Marroquin, who has eight Grammys to his name, first came to Larrabee Studios as a client in the mid '90s after learning that it was a studio with a reputation for catering to engineers, in addition to boasting the very best equipment. Following a recession several years later, as a key client, Marroquin gradually became the majority owner of the studio.

“The one thing about Larrabee is we've always had the greatest engineers here – from David Bianco, to Sylvia Massy,” he says. “Mick Guzauski was a tech here – it feels like everyone has come through here, from Dave Pensado to the Dexter Simmons' of this world. It's got a lot of rich history as being the go-to place for a lot of engineers.”

Within that history lies the evolution of the studio's consoles. Larrabee Studios has always used SSL, starting with an SSL 4000G and upgrading to J and then K Series consoles as and when they came out, with the new Duality Deltas being the latest SSLs to make a splash. But Mills always wanted Larrabee to be an SSL facility from day one.

“SSL is part of my sound - how I drive the console, the channels, and the EQs,” Marroquin explains. “Having three totally different consoles, each with a different sound and workflow has made for an interesting SSL journey.” 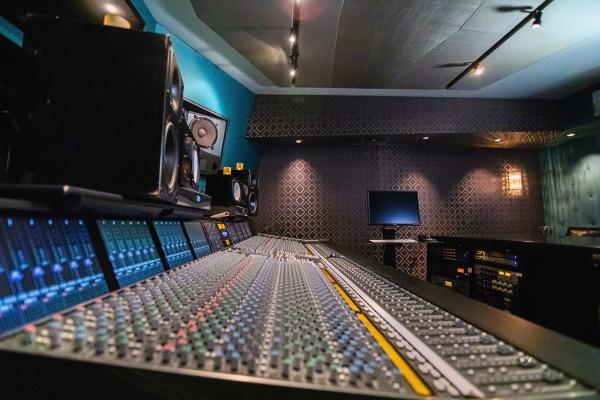 The main room (studio two) was the first room to feature a 4000G console, which was later swapped for a 9000J.

“I was a fan of the J, but not as much as the G,” Marroquin remembers. “The G has the best compressors on any console by far – there is nothing that comes close to it. To this day, this is my favourite compressor. The G sounded so good, and very 70s, but it was definitely old technology in terms of how we'd use the computer. And when the J came out, I remember the top end being super smooth, like I'd never heard before. But the computer – it would save settings in two-to-three seconds, not 30 seconds, so it was very innovative at the time. The J's computer was also so much faster – the recall alone, just the graphics made it feel like 'oh, now we're in the future!'

“And then the K came out. I can drive the K channels a lot harder than I can the J, and the stereo buss – well, I can smash it, and it sounds so good! With the J, I couldn't do it as much, so in terms of overall workflow, the K is the ultimate analogue console. So to summarise: G, to J, to K got better and better... and then Duality came in. It's smaller, and better for mixing in terms of speed.”

When Duality came out, that's where the big shift happened, Marroquin says, adding that the Duality consoles are becoming his go-tos for mixing:

“We all saw the good old days coming to a near end, but the good thing about SSL is that they kept improving the product, and the Duality is one of the most fun desks to mix on for a lot of reasons. So I have to give it to SSL for always innovating and executing in a tough marketplace.

“I think I mix quicker on a Duality, and this may sound silly, but I feel like because of the size of the console itself , I don't have to get up and go to my matrix, whereas on the K, because it's wider, I physically have to get up! So for me, for the workflow on the Duality, I literally have to extend my arms in either direction, and I cover a lot of real estate. I never realised such a simple thing could make such a big difference!”

72-Channel Duality, then the 48-Channel

The Duality Delta 72 was the first to be deployed at Larrabee, with the Delta 48 replacing the 4000G.

“We were conscious about power, and the Duality made sense, as you plug it in and go, and we don't have to worry about old tech that would slow down the workflow,” Marroquin explains.

“They're really nice mix rooms, both of them – the 72 is in one of the nicest studios in the world; you can put a 30-piece orchestra in there and 10-piece band with isolation. It's a gorgeous room,” he continues. “When we took over, there was a lot of criticism on why we picked a Duality for such a beautiful classic room, but we like to think we're progressive, and on the forefront of technology, quality and workflow, and that's what some of our clients demand. We know who we want to be, and where we want to be – and we think Duality sits just where we want to be.”

“I really like it. If you have a great mic, why would you want to colour it more? We have an amazing mic collection at Larrabee – you put one of our Neumann U47s on the Duality pre, and it sounds amazing. These Duality mic pres sound as good as anything out there, in my opinion. And this console's EQ is probably my favourite EQ ever, and it is also the cleanest sounding SSL EQ. In fact, it could be better than the K! That is one of the things that makes that console. And, of course, you also have the G Buss on the Duality; I love smashing that stereo buss – and the Duality can take it, and sometimes even more so than the older boards. That is pretty phenomenal, when you think about it.”

Elaborating on the G Buss, Marroquin likens it to a production tool:

“If it's full spectrum hip hop, it's harder to drive it, as you don't want to take the attack out of the low end, but if I'm mixing pop music, or maybe some alternative stuff, I like driving it from the very beginning, as I can make decisions based on that sound. It becomes a production tool, which is really cool.”

The Duality workflow also impresses where it counts:

“Using it with the Pro Tools workstation, to me, was the ultimate deciding factor. If you're working on a vocal blend and you put it on the Pro Tools workstation, it's so amazing being able to grab faders and not to have to go into Pro Tools,” Marroquin reveals. “And the recall – are you kidding me? It is heaven! I've got two assistants, and they recall in about 10 minutes, where it used to take at least 45 minutes. It's the best - one of the biggest improvements. The graphics are great, the meters are great, and you get right on it. I can always count on it. We never ask ourselves 'did we get the recall right?' - as it's spot on every time, and so quick.”

When comparing the Duality 72 to the 42, Marroquin insists that the former is even better:

“The 72 is a great board for the big tracking room, so we wanted that number of pres, but I mix on the 48 even if I have the 72 frame. I try to keep everything on the 48, as to me, it's kind of the same. I only move between the 48 channels on either frame, as it's so quick. Everything's right in front of me - and the 48, of course, is a smaller footprint, and I am using it on so many different projects now. I am 100% happy and wouldn't change it for anything. I think we're at an all time great moment at Larrabee right now.”

Larrabee doesn't just limit the use of SSL to its studio rooms: one can also be found in the in-house restaurant.

“It's really a supper club of 2020 – well, the future supper club, as I like to call it” Marroquin laughs. “The concept is to have a stage whenever we need it, and we're basically pre-wired via fibre optic cable to the studio, so we can record any show in any one of our rooms. Talk about content we can create! We can record it there with the SSLLive L300 console at the venue, but we can also record it here with any of our desks, so it makes it a very interesting thing to do. So now any artist that comes, we'll be able to offer content, and no one is able to do that anywhere at this point.”

Three XL9000K consoles still call Larrabee Studios home to this day, with the facility continuing to offer its clients the classic kit it is known for, but the fusion of old and new is what makes it the forward-thinking facility that it is.

“We have improved everything, taking Larrabee into 2020 with the most modern and classic kit combination,” Marroquin concludes. “The clients feel the difference, and that they're being treated like they're at a 5-star resort. We try to take care of them and keep improving; try to make a working environment that caters to a lot of different demos and artists.”