Maverick Opts for XL with SSL

Suffolk, UK – Lincoln Grounds of Maverick Music in the UK, is a versatile, busy Media Composer. He specialises in projects recorded with real instruments and accomplished musicians, and values a production workflow that gives him all the support he needs but which stands clear when the players are in. To facilitate this, Grounds has recently invested in a Solid State Logic XL-Desk. 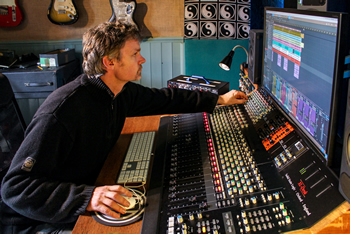 Grounds has more than 430 tracks logged with Audio Network - a music content provider for the production industries that has made a name for itself turning over an incredible amount of original music but without compromising quality. For him, that's a perfect fit: "I'm not a classic modern media composer because I hardly do anything with MIDI. I don't have any fancy sample libraries. I do almost everything though microphones. and with real musicians."

The XL-Desk is simple, yet clever. There are no features that I don't use, so I haven't spent any money on features I don't need.
Lincoln Grounds.

Audio Network has been very supportive of this approach, obviously valuing his results. "I get to pick and choose quite a lot of projects, including a lot of marimba-based tracks, orchestral tracks, and a lot of 'Americana'. For that I go off to Nashville quite often."

The XL-Desk, recently installed in Grounds' own Maverick Music studio, could be considered a traditional 24:8 analogue console, but with a few twists, including a wealth of routing and I/O options. It features dual input channel strips with SSL VHD (Variable Harmonic Drive) mic pres on the first eight and an additional 18 500 format rack slots available for processing or additional mic pres - accessible by channels and busses. A 500 format SSL bus compressor comes as standard and is hardwired into bus A, while an additional three busses (B, C, and D) can be summed into bus A as required, and a Cue Stereo Bus for headphone mix can be repurposed at mix down to give 40 summing inputs.

"It's important that I have lots of different mic press and lots of microphones," says Grounds. "And they all have their dedicated channel, and they are always plugged in. That way there's no buzz-kill when I'm recording... I just have to unmute the channel and go. That's a big reason why I have a desk.

Grounds has a variety of 500 format mic pres and EQs installed in the XL-Desk from several different manufacturers. He also has a different stereo compressor on each of the four busses, and two sets of monitors (large and small) permanently connected.

"The console is probably the biggest investment in a studio. It’s the first thing that gets switched on every day, and everything I record is going through it. I can't work without it, so it must work every single time; it must be reliable and it has to sound great...This console has a tonne of headroom. I don't think I've ever seen it peak. It just gets out of the way and everything sounds the way you want it to sound."

Even though Grounds mixes in the box, he has always had a console in his studio and has built up an appreciation for capturing performances from the beginning and committing to creative decisions at the tracking stage. This approach has been nurtured during the time he has spent in Nashville amongst some of the best session musicians in the world. 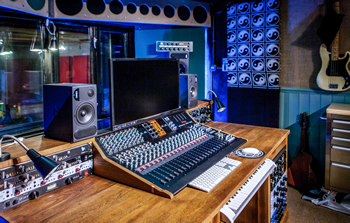 "There's are lot more people working like that over there," he explains... "Using EQ and compression on the way in and mixing inside the box... I don't do cut and paste. Even if there's a tambourine on one of my tracks, I'll play it from beginning to end. I'm so old-school it's ridiculous."

By putting emphasis on capturing and shaping a performance on the way in, Grounds says he gains much in terms of speed and efficiency: "If you've got good players and you're ready to work really fast... It's worth it because you don't have to edit - you only have to arrange and mix.

"Of course, it's also about the performance. For 60 percent of what musicians do you probably couldn't tell the difference between them and high-end samples. But now and again you'll get a 'musiciany' thing - a trill, a feel, a dynamic - and it doesn't matter how you programme something, you could never make it sound that natural."

A simple, uncluttered workflow at the tracking stage is an important part of Grounds' recipe for a perfect performance. And because it's often him who is performing, quite a few of the 'hybrid' console features would be superfluous. "I could have gone with DAW control and automation and all of that stuff," he notes. "But I'm not a techy-enough person to have that in my head when I'm working. I'd rather have chord progressions and harmonies at the forefront of what I'm doing.

"The XL-Desk is simple, yet clever. There are no features that I don't use, so I haven't spent any money on features I don't need.

“I've got a bunch of outboard options that I use on the way in, and it's easy to patch that without having to get up and change things around. I can patch in a Pultec with my guitar still in my lap. That's awesome.”