The Beginnings
Victory Christian Center was started in 1981 by Founding Pastors Billy Joe and Sharon Daugherty, and has grown to become a large and multifaceted hub, incorporating a school, college, plus a wide range of ministries and outreach initiatives. The current lead Pastors are Billy Joe and Sharon Daugherty's son, Paul Daugherty, and his wife Ashley.

The Tulsa campus sees around 8000 people attend services during one week at Victory, using the impressive 3800-seat auditorium for four main services on Wednesday, Saturday, and Sunday. Chris Trowbridge, Technical Director and Front of House Engineer, characterises Victory as a 'charismatic church': "We run a high production value, concert-style service," he explains. "Comparatively we do an extended worship time with the band - around 25 minutes in worship and 10-15 in the Altar Ministry... Our Pastor is also a musician and he loves worshipping"
Something else that sets Victory apart is its ambitious Easter and Christmas productions. These are well known for being no-holds-barred theatrical spectaculars that require months of preparation. "We normally have around 24 DPA head mics active during one of these productions," says Trowbridge. "We bring in a massive set... We turn the whole room into Jerusalem.

"The layout of the console really helps there. I like having the 36 faders up front as I have a lot of balancing to do and a lot of mics to deal with. I also use the FX Rack Automix tool pretty heavily for our big theatrical productions. Not having to eat up faders to make it work is a big win for us, which enabled us to fit into the L200 rather than going up to an L300 or L500." 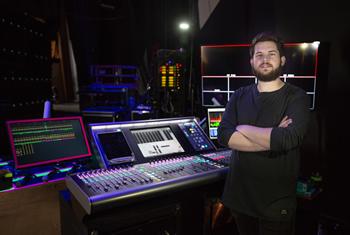 On normal services, inputs to the two SSL Live L200 consoles at monitors (with Monitor Engineer Matt Anderson) and front of house number around 68, which includes all of the live band inputs: Drums, two electric guitars, bass, two keyboard positions, an acoustic guitar, five background singers, three main vocals, and regular guest instruments such as violin or cello. The Pastor and presentation mics, plus up to 16 stereo stems for music tracks make up the rest. "Our pastor is an off-the-cuff kind of Preacher sometimes," says Trowbridge. "He will call for certain things in the middle of a show and we prepare for that instead of fighting it. The flexibility of the SSL consoles suits that. Being able to navigate independently through the tiles, for example, means I can maintain a custom tile with all my 'knee -jerk reaction stuff', while flipping through the band channels on the far tile and keeping my VCAs in the middle. I'm always set up to catch anything." The larger the venue, the more critical it is to maximize the clarity and fidelity of audio in every step of the system, and no one does that like SSL.Duke DeJong, CCI Solutions

The SSL L200 Layer Manager page presents simple drag-and-drop interface to set up Fader Tile layouts. You just select paths in the source area and drag them to locations in the destination area. Any channel and path types, including VCAs, can be located anywhere on the physical surface and recalled using Layer and Bank selections on individual tiles. "I can lay the console out exactly how I want it," notes Trowbridge. "I'm not tied to my input list like so many consoles are - where you have to lay things out in a certain way in order for it to populate certain faders."

The Audible Approach
Trowbridge's approach to the overall worship sound at services is not aggressive, on the basis that most of the congregation aren't ready for a full rock offensive on a Sunday morning. Service SPLs are around 96dB and he takes care to dial down some of the more biting high-mids that might grate. "My mixing style or aim is to make the mix easy to listen to, and engaging. I try not to ice-pick people with vocals. I mix what feels right for the room and the moment." From the first demos with CCI Solutions' console, Trowbridge says he fell in love with the sound of the SSL L200 console. "For me, there wasn't really another option," he says. "The clarity is amazing. The mix is full where you need it, and we can hear into the mix. Before this it was two dimensional. We have been blown away by the smoothness of everything - the 'verbs, the compression... That why we went with it." 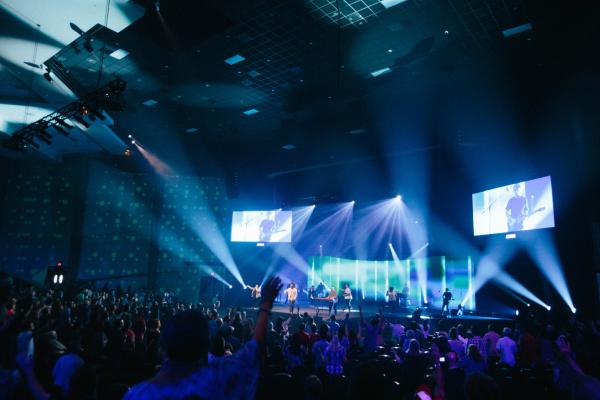 A full house at Victory.
Duke DeJong, Vice President, Sales and Integration at CCI Solutions, notes that the console is ideally suited to the busy, changeable production environment at Victory: "The larger the venue, the more critical it is to maximize the clarity and fidelity of audio in every step of the system, and no one does that like SSL. Add to that a highly flexible work flow to help you easily mix 96 inputs and 48 outputs, and you get both pristine sound and total control of your mix. The L200 is really ideal for anyone who needs high-end horsepower on a mid-size budget, giving you the best of all worlds."

Broadcast Mix
Victory does not currently simulcast services, but does have other Campuses and venues that use its output to varying degrees. Trowbridge also provides a broadcast mix directly from the Front of House console, for outlets such as TBN, Hillsong Channel, and several local TV stations. "I've created a Stem Group that has my board mix, plus audience mics, which becomes the broadcast mix. We don't have a separate broadcast position, which is a little crazy given how much we do, but it works, and it sounds even better now, coming through the SSL."

SSL would like to thank Mondo*dr for creating this content. For this and many other Live Sound articles, head over to www.mondodr.com