"With the G Compressor onboard the Live console I don’t need outboard compressors." In addition to the L550, Gueness' new set up also consists of three SSL Fusion Processors 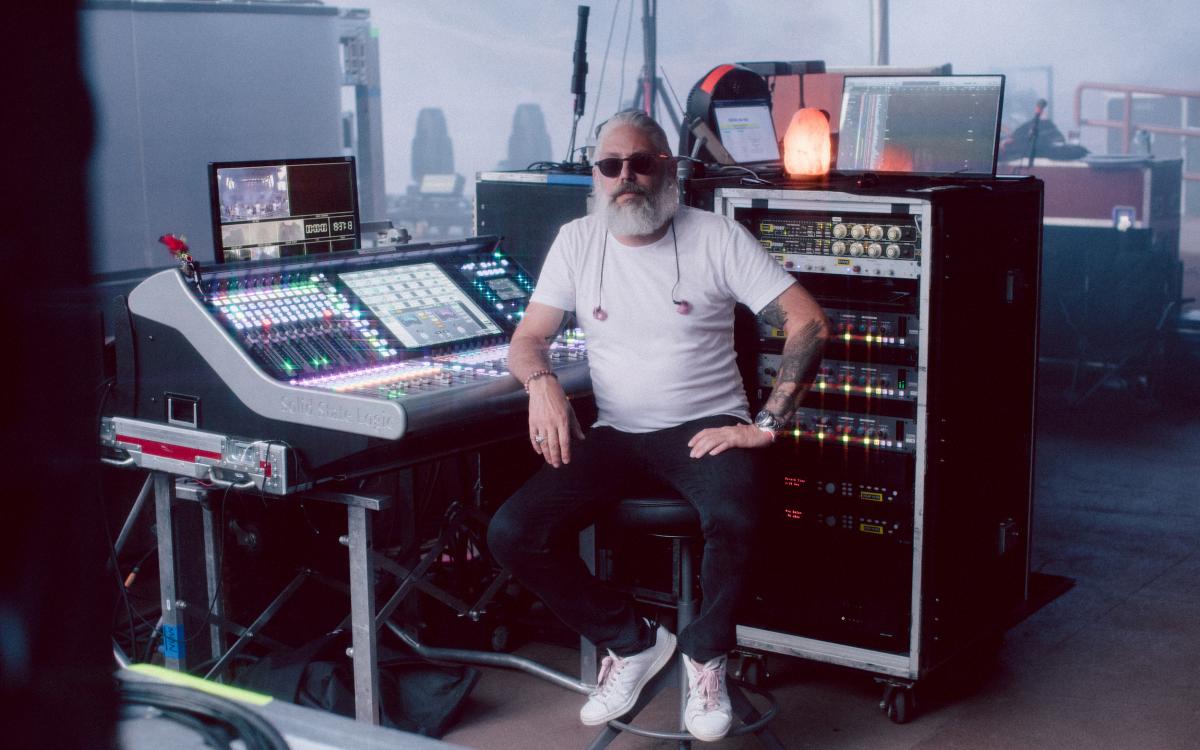 Gueness, who signed-on with Rüfüs Du Sol at the beginning of 2015 having previously worked for audio rental and installed sound company Audio Technik in Perth, Western Australia, has strong opinions about digital desks. “Many digital consoles haven’t really sounded the best,” he says. “They have nothing to them; they’re vanilla sounding.” As a result, he’s often had to carry a rack or two of outboard equipment, including plug-in platforms, to get the sounds that he’s needed.

But where engineers often have to insert plug-ins on every channel just to get the console to sound right, that’s not the case with the SSL Live, he says. “I don’t need to make the Live console sound good. You see the Solid State Logic name and you know it’s going to sound pretty cool — and it does. It sounds like you would expect.”

Out on tour now, he says, “I don’t use any plug-ins. Everything I use is on the Live console. So that whole rack of stuff has gone out the window,” apart from a couple of reverb units.

Fusion offers users a set of six coloration tools that add tonal character to stereo stems. In the past, Gueness needed a stack of compressors, limiters, de-essers, EQs and source enhancers to achieve the results he wanted on his vocal chains. Now, almost everything he needs is in the Fusion processors, which adds the warmth and nuance of analog circuitry to his mixes. “Just give me a console that sounds good from input to output then I’ll add some things for flavor,” he says. “Those Fusions have been a game-changer for me.”

In particular, he says, “The Violet EQ sounds awesome.” The two-band EQ adds low-end weight and high-end sheen to any mix bus. Gueness also appreciates the HF Compressor section, which smooths high-end harshness with a tape-like high-frequency roll off. “The HF Compressor really  tightens the top end. Then you can squish it down and make it usable,” he says. “Fusion allows me to get back everything that I’ve lost in the summing of the outputs; I get space, depth and width back.”

Gueness was not entirely sure how the Fusion processors would perform for his application. “I had watched a bunch of videos on it and read some reviews, but I wasn’t sure how it was going to go for live and using it for monitors. I was really surprised; they’ve done everything I expected them to do. Those things are awesome, and I’m so glad I have them,” he says. 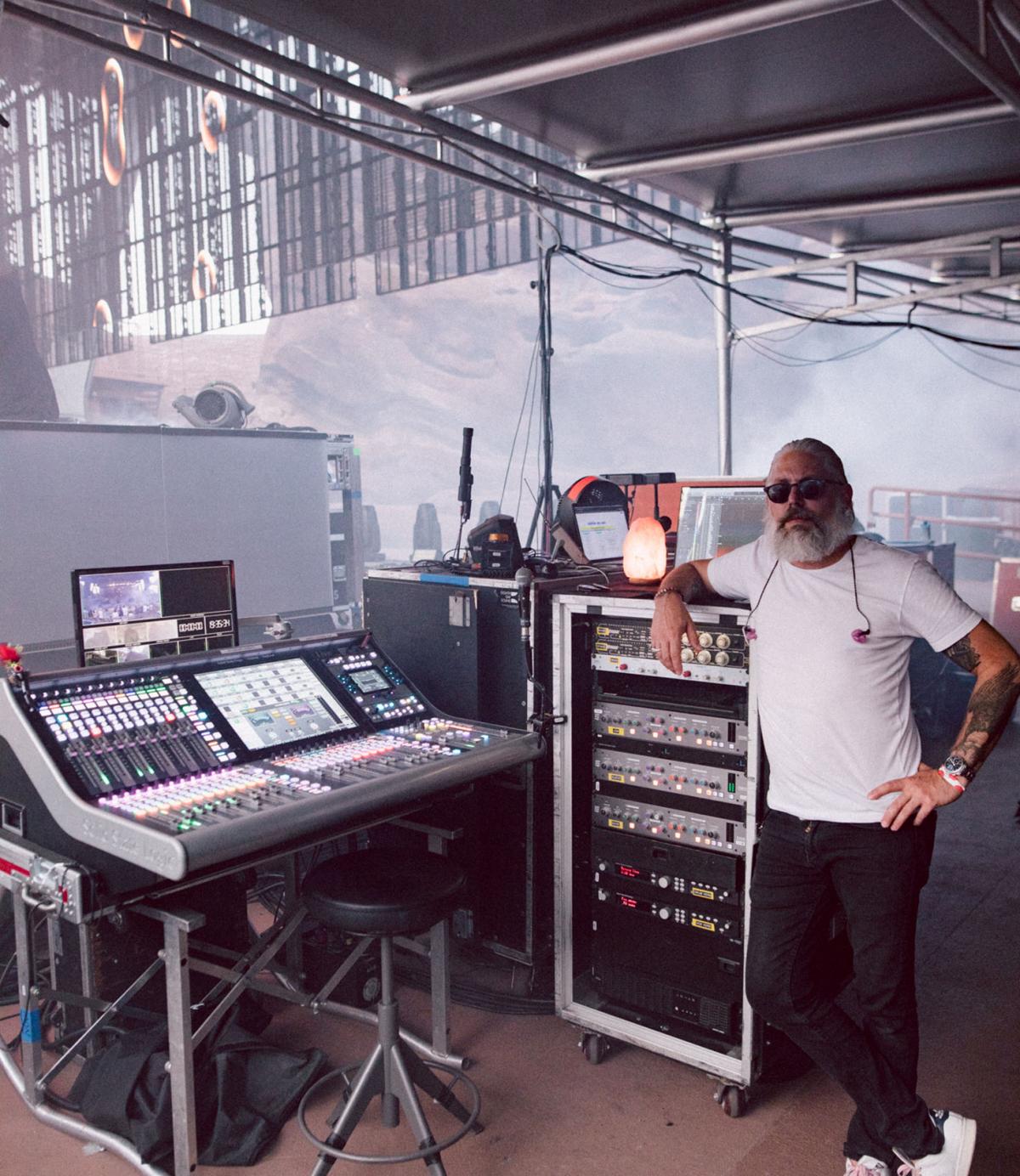 He had left a source enhancer in his outboard rack for the band’s recent return to live performances at Red Rocks. “But now SSL has put the Sourcer in the plug-in list you have so much more control. You can change the speed setting, and the high-pass and low-pass filters are invaluable — it’s not reacting on stuff you don’t want it to react on,” he says. “So the onboard Sourcerer has taken the place of the outboard unit.”

On previous tours he also used to carry four outboard stereo bus compressors for his main ear mixes. “Now I’ve gotten rid of those. With the G Compressor onboard the Live console I don’t need outboard compressors.”

The improvement in quality and character was immediately noticeable when he implemented the new monitor setup, Gueness reports. “The band all said, ‘Wow, this sounds really good.’ And I can now hear things in the set that I’ve heard before but that weren’t that apparent. It’s so subtle, too, and nice and easy on the ears. There’s nothing abrasive. None of the processing on the Fusion is aggressive.” But while it may be subtle, he says, it’s very effective — and essential: “If you take it away, you have to put it back.”

The band are sending 64 inputs to front-of-house and monitors, Gueness says. He adds a handful of extra inputs then generates nearly two dozen outputs to the band, technical crew, video, automation and other destinations. “Some of the output side is the most complicated, getting certain things to video and lighting,” he says. “It’s very specific, so I have to tailor my outputs for that.”

The only thing wrong with the three Fusion processors he has out on tour is that he would ideally like to have four, Gueness says: “If I could just have one more!”

Beginning in September, Rüfüs Du Sol will play a series of U.S. festival dates, including Bonnaroo, Governor's Ball, Austin City Limits and Outside Lands. Then, in November, they embark on a North American Fall tour that includes two more shows at Red Rocks and stops in Phoenix, Las Vegas, Los Angeles and Houston.