Mumford and Sons Takes SSL L500 to the Heartland

Oxford, UK – Front of House Engineer Chris Pollard has been touring with Mumford & Sons since their first album and is currently in the midst of the Band’s epic An Arrow Through The Heartland tour, which started back in May 2015. Pollard's console of choice for the tour is the SSL L500 live console.

The previous tour used a top-flight analogue console, so the SSL Live digital console had to be up to scratch: "The sound of the raw preamp on this console is incredible, and that analogue quality is retained through the console.”

The FOH path count for Mumford & Sons is large - it starts with around 76 inputs, but Pollard adds to that with extensive use of the L500's Stem bus type - a grouping bus with discrete send levels and full processing that can be picked from any one of six points on the contributing path, and routed anywhere, including to other stems.

By inserting an FX into a stem and routing channels to that stem, Pollard creates a fully processed auxiliary bus without requiring a separate return path. "I'm not using auxiliaries at all," says Pollard. "It's a new way of working for me, but it works really well." 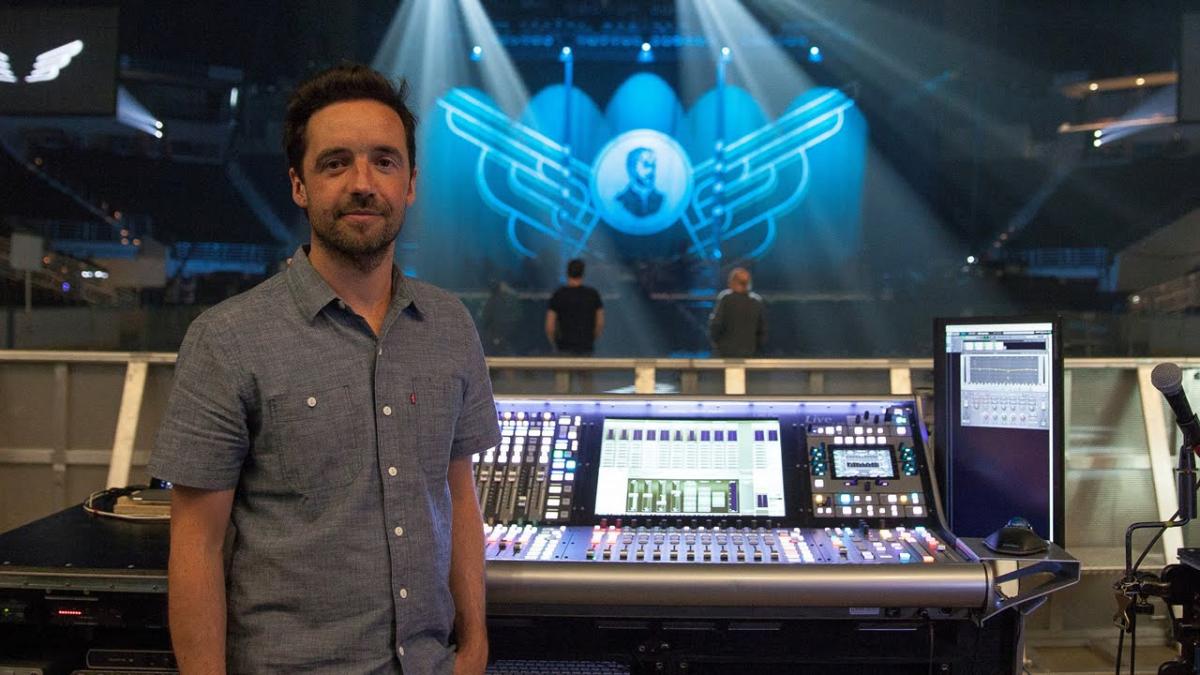 Pollard lays out his VCA masters on Fader Tile 1, immediately below the large multi-touch screen. The tile to the left of that contains banks of instrument channels, and the one above has all the FX stems and other groups. "In a way, I've replicated an old-school analogue set up, but with this I can quickly access any instrument through the VCA groups, with the 'Q' button.

The Q button (Super-Query function) enables forward and reverse interrogation, so when Pollard hits the Q button on a VCA master, the neighbouring tiles are immediately populated with the contributing channels. This also works with all bus types, and with input channels (for fast access to destination paths).

"My layout is built around that," explains Pollard. "A big advantage of this console is that you can put anything anywhere - you can think about your habits and the way you work and design your show file around that... Anyone can create a layout that works for them. Then, as your show evolves - as it naturally does over a year of touring - you can shift things around..."

The L500's onboard FX Rack offers 96 effect slots, arranged in racks with dual linkable tempo sources - and nearly 50 different SSL effects and tools. Among his favourite, Pollard cites the SSL Bus Compressor: "It's a great sounding compressor... You can really dig in and make it sound the way you want it to… even emulate other compressors...."

"The phase scope tool is really useful too," he continues. "I have it set up on a Stem as a 'tool channel'. If I need to check the phase relationship between two inputs I can simply send them to the phase scope, left and right, and see how they are lining up… On the input path, I can use the All-Pass Filter and tweak it until I can see that it's fully locked up."

Every one of the available 208 fully processed paths on the L500 (256 paths total) incorporates an All-Pass Filter for adjusting phase without affecting response - extremely useful for multi-miking situations.

As an example, Pollard describes Marcus Mumford's guitar path, which begins split between two amps - a Fender Super Reverb Amp and another "boutique" amp: "I've got a Shure SM57 on one, and a Shure KSM313 ribbon mic on the other. I send both to the FX Rack phase tool and use the All-Pass Filter on the KSM channel to get them sounding exactly right together. They then get sent to a stem, which has a Waves Soundgrid Multirack insert on it; that is then sent to my master band stem which is, in turn, sent to the master outputs..."

For Pollard and the band, the An Arrow Through The Heartland road trip will be finishing at the end of this year's festival season with the Austin City Limits Music Festival in October.

If you want to learn more about the tour and Pollard’s take on Front of House, there is a new YouTube video available on the SSL channel here.