Birmingham, UK - The new £57 million Royal Birmingham Conservatoire building has officially opened its doors. This milestone development elevates the Conservatoire facilities to world-class status and includes a recording and live sound production infrastructure without compromise, and with SSL very much at its heart. The new equipment list includes four SSL Live consoles and five SSL SuperAnalogueTM consoles, connected with a facility-wide Dante network.

With a history dating back to 1859, the Conservatoire is one of the leading music and drama academies in the UK. Part of Birmingham City University, the development boasts five new public performance spaces, which include a 500-seat concert hall, a 150-seat recital hall, and a 100-seat organ studio. It also includes The Lab, a cutting edge, completely flexible black-box studio, the first permanent jazz space in any UK conservatoire (the 80-seat Eastside Jazz Club), private rehearsal rooms, dedicated teaching spaces for musicians, and more than 70 teaching practice rooms.

An external view of the Royal Birmingham Conservatoire.

Music Technology was introduced to the Conservatoire in 2001 and now the department offers BMus (Bachelor of Music), BSc (Bachelor of Science) degrees as well as postgraduate courses.

A Tour of the Building

There are four main live performance spaces in the Conservatoire. The 500-seat Concert Hall is equipped with an SSL L500 live console, while the small Recital Hall, Eastside Jazz Club, and The Lab each have SSL L300 live consoles. From the stages and performance spaces, the consoles are fed by SSL ML32.32 Stageboxes and redundant Blacklight II connections via the SSL Blacklight II MADI Concentrator, with additional connections to the facility-wide Dante network, and MADI, Optocore, and analogue infrastructures.

We had a good look around in the commercial world and realised that, unless there’s a real passion for a particular brand, pretty much every serious room has an SSL console in it...
Dr Simon Hall

The Conservatoire's new Studioplex is a group of recording and production facilities that fulfil many functions, from turning the Concert Hall into a world-class ensemble recording space, to contemporary production, and Music Technology course training.

Dr Simon Hall is the Head of Music Technology at the Conservatoire and has been an integral part of the decision making for the recording and live production facilities. Establishing a close partnership with SSL was an important step in the process. “Originally, we did consider putting a variety of different manufacturers’ consoles around the facility,” he notes. “But for a variety of reasons we went with SSL for everything.

“We had a good look around in the commercial world and realised that, unless there’s a real passion for a particular brand, pretty much every serious room has an SSL console in it – especially in the UK and Europe. Of course, the fact that SSL HQ is only an hour’s drive from the Conservatoire was a big selling point for us - but in any case, SSL has an extremely responsive, reliable support team, which is important.”

Hall points out that the Conservatoire has a good variety of outboard input options for the studios, though the VHD (Variable Harmonic Drive) pre-amps on the Duality consoles themselves offer a wide range of input character. “That’s something I love about the Duality – you do have lots of timbral control on the way in… Having VHD on every Duality channel is fantastic… Even in a Jazz context if you want just a bit more crunch on a kick or a snare you can get that pretty easily.

They are calling us ‘the digital conservatoire…’ but what we’re really trying to do is cement very high quality audio into the curriculum - into everything we do. The partnership with SSL is helping us achieve that.

Flexibility was one of the key requirements for the Conservatoire’s technical provision, which is why the primary infrastructure connecting the whole facility – not just the main production spaces – is Dante. Hall: “We can route anything from anywhere, to anywhere else. All the consoles and all of the Rooms in the Conservatoire can be on the Network and we’re quite excited about the creative possibilities of that… Students will be able to plug into the network using Dante’s Virtual Sound Card and get to any audio from anywhere in the building. “

The new Royal Birmingham Conservatoire will undoubtedly be setting plenty of benchmarks, not only for other similar institutions, but for commercial music production as well. 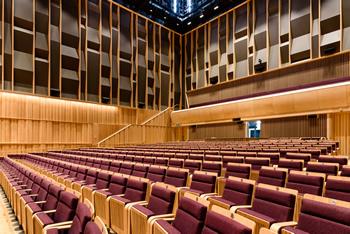 Ahead of the official opening, Professor Philip Plowden, Vice-Chancellor, Birmingham City University, said: “Birmingham has always been proud of its role as a national centre for excellence in performing arts, and the creative industries are growing faster here than anywhere else in the country – employing around 34,000 local people – and our new facility will bolster this further.

“The new Royal Birmingham Conservatoire is a significant investment for the University, the city and, indeed, the country as a whole, and one in which will certainly set a new global benchmark for music and drama education and performance.”

This prediction also came with a pledge of inclusivity. Internationally renowned cellist and conductor Professor Julian Lloyd Webber took up the position as Birmingham Conservatoire Principal in 2015 and at the launch ceremony yesterday (7th September 2017) he noted:

“…A building is only as effective as the people inside it, and my team and I will continue our work to ensure that the future arts industry is not dominated by the wealthy elite. Our impressive programme of learning and widening music participation benefits thousands of children, young people and their families from diverse communities across England, and our new home will become the central hub of all of these crucial activities.

“...We are looking forward to welcoming our new and returning students in the next few weeks, as well as launching our public programme, which will formally commence with our opening season next year.

The Acoustic Design in the new Royal Birmingham Conservatoire was by Michael Whitcroft, Hoare Lea Acoustics.

John Flynn (Acoustic Design Group) was a consultant on the project.

The System Integrator on the project was the internationally award-winning audio-visual and IT systems specialist, Vanti.