A New Console for Old Dominion 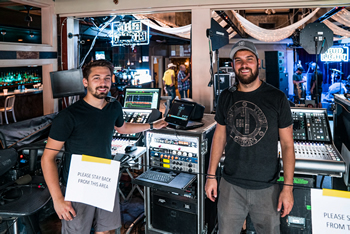 USA – Old Dominion – winners in the New Group category at the 2016 Academy of Country Music Awards – have been going from strength to strength. Busy independently touring its recently released album Happy Endings, and supporting the likes of Kenny Chesney and Thomas Rhett, the band has also been confirmed for Chesney’s Trip Around the Sun stadium tour in 2018. Earlier this year, Front of House Engineer Ian Zorbaugh and Monitor Engineer Dean Studebaker both decided to take SSL L300 Plus consoles, supplied by premier event production company Morris Lighting & Sound, on the road with Old Dominion, and haven’t looked back since…

Zorbaugh originally decided to take the SSL L300 out on tour because of the positive feedback he was hearing from other engineers - particularly Chris Rabold, who used L500 on the Kenny Chesney tour, which Old Dominion has been supporting. "The main thing I heard about the SSLs was that they sound absolutely phenomenal - that you need minimal EQ, less processing, and so on. I wanted to experience that, and to get to know the console."

The main thing I heard about the SSLs was that they sound absolutely phenomenal - that you need minimal EQ, less processing, and so on. I wanted to experience that, and to get to know the console.
Ian Zorbaugh

Zorbaugh manages about 60 inputs from stage, with half of those coming from Whit Sellers' sizable drum kit, including two snares, four toms, and a wide range of cymbals. With that number of drums squeezed into the kit, and generating a lot of volume, control is an important part of the on-stage craft. As well as the standard kit microphones, there are also a number of drum triggers, set up to feed the gate side chains on the individual kit channels. "All the cymbals are so close - some are actually closer to some of the tom mics than the toms are," explains Zorbaugh. "So having the triggers means that the correct gate opens when he's hitting the tom and stays closed when the splash cymbal is flying around everywhere!"

"We've also moved things around on the stage from a traditional drums-centre arrangement, which used to give us a lot of bleed into the main vocal mic. Moving the kit to the left and away from the vocal mic has helped a lot."

Also, to help control, the band has moved the guitar rigs to isolation cabinets. Zorbaugh: "Two years ago we switched all the amps backwards so they weren't firing into the crowd, and this year I got them into dedicated racks that have all the heads and cabs built-in. They sound great, and you can stand next to one and have a conversation while playing the guitar! I do have to add ambience into it though - put some space back into the sound."

Inside the SSL L300 at Front of House, Zorbaugh bases the structure of his mix almost entirely around stem groups - a particular group channel type that you can mix to like an aux and that can have the same full processing and routing as any input channel - including the ability to route to other stems and use the internal FX rack inserts. "I'm probably using two auxes, total, and running almost everything on stems," says Zorbaugh. I like having everything laid out so I barely have to leave my top layer."

For example, he routes the two lead guitar mics to a single stem so he can manage overall processing for that instrument, which then goes into the band stem. The SSL makes it easy to access contributions to stem with dedicated Super-Query (Q) buttons, which immediately spills those contributions onto the console surface with a single press, and returns to the original layout with a second press.

"I’m even sending things that don't necessarily need it, to a stem,” says Zorbaugh. “…Like the stereo keyboard channel. This gives me lots of options. If we have a TV or video shoot I can provide anything from an analogue split off of the pre-amps, to stereo stems of all the groups, or a full band stem plus a vocal stem, or a full-on left and right mix."

Zorbaugh has taken his computer-based plug-in system off his rig, opting instead for a few choice pieces of analogue outboard, two reverb units, and the SSL console's internal FX Rack. I'm a big fan of the dynamic EQ," he notes. "All four vocal mics, the electric and acoustic guitars... Acoustic guitars are not the most consistent instrument for dynamics, and the player can either play light, or really dig in to it and get a lot of bottom end, so I have a dynamic EQ on that to keep it sat in the right 'pocket'.

"On electric guitars, If he goes from a dark Les Paul to a Strat, it'll manage that - let me set the frequency range I want."

Zorbaugh’s original motivation for taking SSL Live on tour was its reputation for sound quality. And, he reports, that has been borne out by his own experience. "Everything sounds very natural - less like there's a computer in the way; like there isn't as much 'stuff' going on - definitely a more analogue feel."