"I just press the 360° button and the mix pops out. I have all the channels in view and I’m sitting in front of a real desk"

Berlin, Germany, July 16, 2021 — Grammy-nominated music producer, mixer, remixer and mastering engineer Sascha “Busy” Bühren recently added Solid State Logic’s UF8 advanced DAW controller and UC1 hardware plug-in controller at his new home-based facility, which is located just off the Kurfürstendamm, one of Berlin’s most elegant boulevards. The relocation came after Busy and his partner, Laura, who together own and operate TrueBusyness Musicproductions, were driven out of their former two-story studio facility in the city by gentrification. 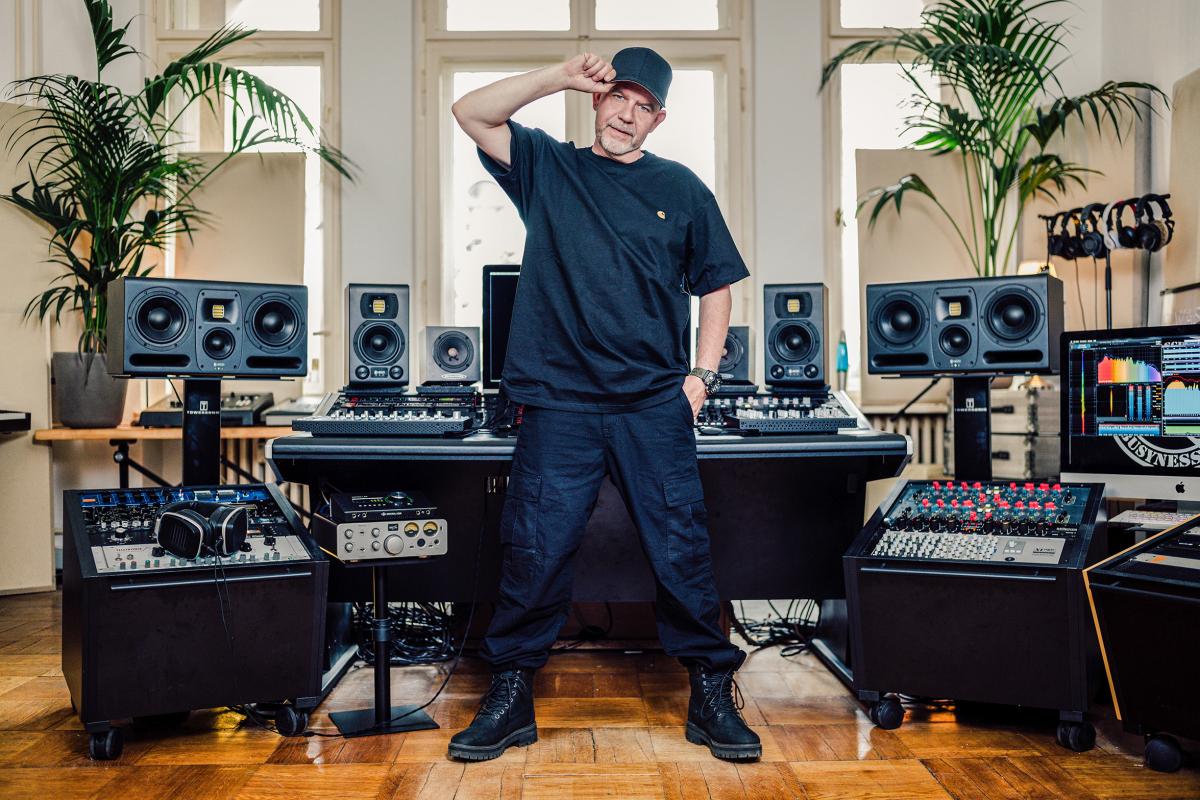 The previous TrueBusyness complex housed not only Bühren’s mastering room and production and edit suites — not to mention the couple’s private apartment — but also a music production and mix room equipped with a 48-input SSL AWS 948. “My dream was always to have my own SSL board,” he says. “The day it arrived was like 45 years of birthdays and Christmases all in one.” The room soon attracted a lot of business, including major hip-hop artists such as Waka Flocka Flame and Swizz Beatz, he reports.

Bühren says he missed having faders available to him when working in his mixing room at the old facility. He had to sell the AWS 948 when he and Laura moved into their new apartment, which was built in 1899 and has 13-foot ceilings and original parquet floors. But he still missed the familiar feel of SSL fader caps under his fingers — so much so that he bought a bunch to replace the caps on the controller he installed in his new studio, which is just off their living room. Then SSL launched its UF8 controller and it was game over, he says: “What I always needed was a control surface to dive into the SSL world again. It’s just an amazing piece of gear that I’ve really missed through all the years.” 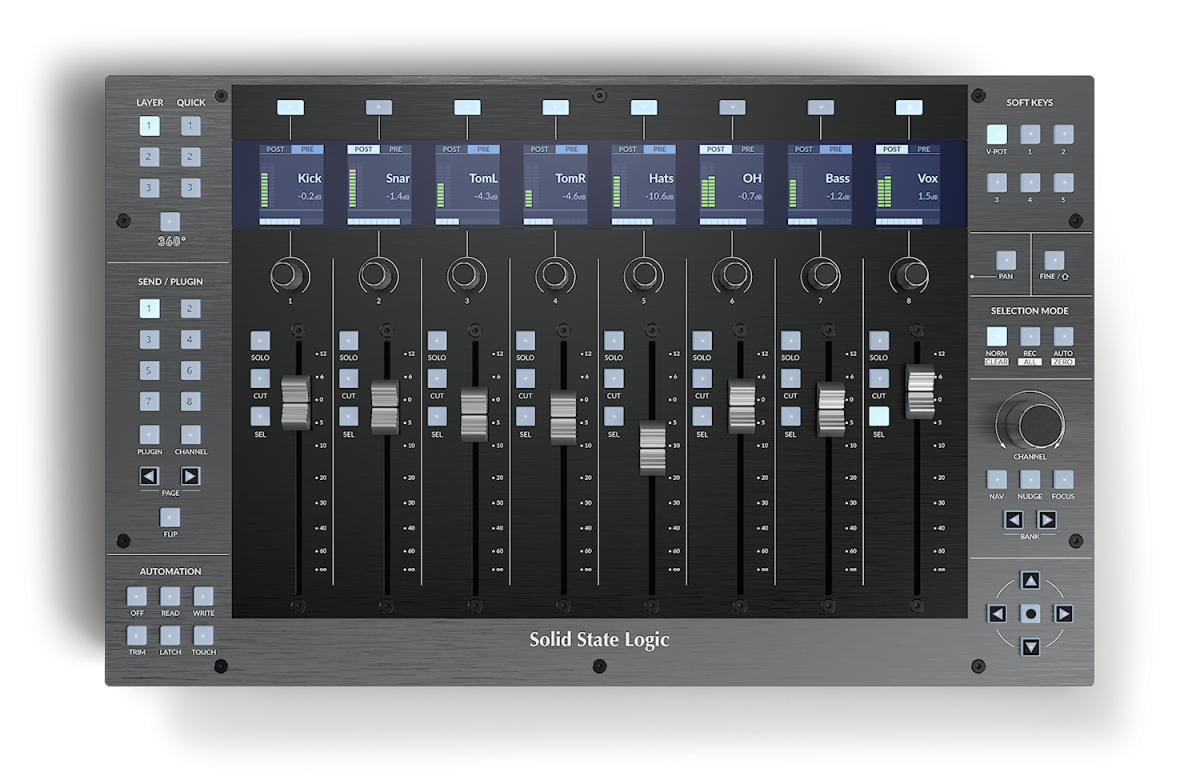 The UF8, which he purchased from Audio Pro, SSL’s distributor in Germany, effectively bridges the gap between his former separate mastering/mixing and production rooms, he says. “Now I have one studio with everything in the center of the room. I have my Sterling Modular studio furniture with outboard. Everything is reachable from where I’m sitting; I don’t have to move.”

Bühren, who started as a DJ in the late-1980s, is a longtime hip-hop fan and was bitten by the mastering bug when he took an early major label band project to Tony Dawsey at Masterdisk in New York City over 20 years ago. He has since garnered Gold, Platinum and Diamond certifications for his mastering projects across multiple music genres for a long list of clients including Seeed, Paul McCartney and Helloween. 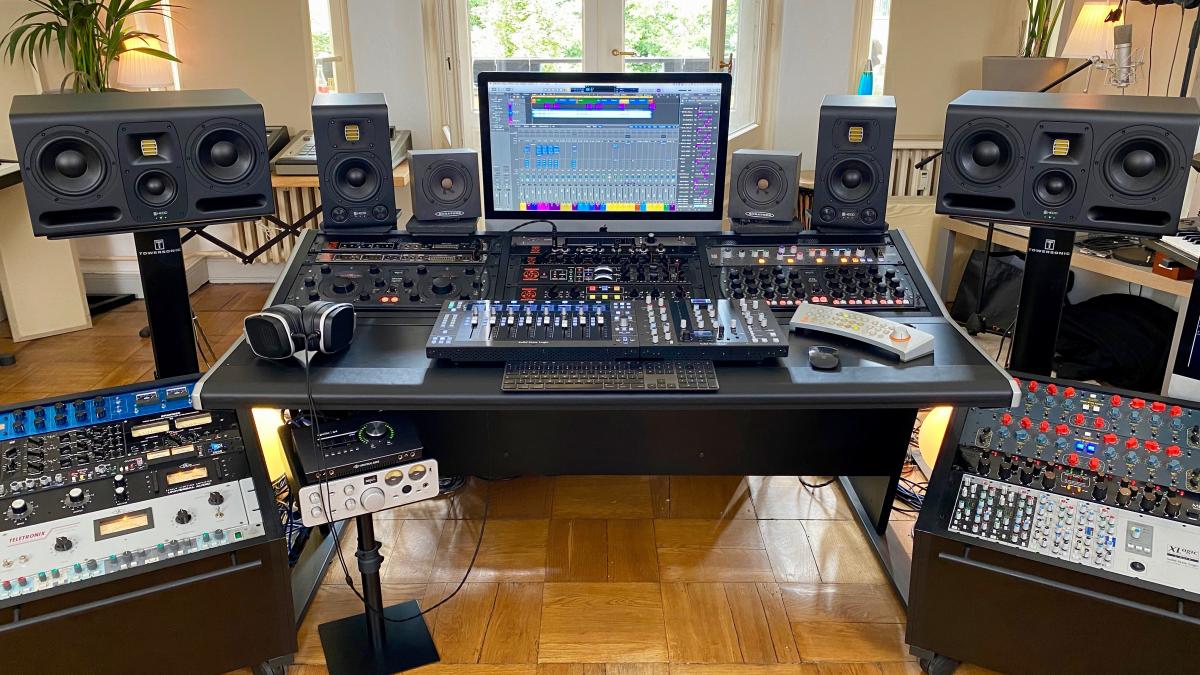 Freedom 'in-the-box' with UC1 and UF8

With his focus now on mastering and mixing, Bühren also purchased a UC1 as soon as it was available. “It’s really changed the way I mix in-the-box. Now, I can go on location and just pack my Macbook, my interface, some nice headphones and the UC1 and UF8,” he says. “I just need these little boxes and I’m free!”

Most importantly for his workflow, Bühren says, the SSL controllers are his gateway into the mix. “I just press the 360° button and the mix pops out. I have all the channels in view and I’m sitting in front of a real desk. Just like on a board, you put your compressor on the master bus, the new Channel Strip 2 on each channel, and you’re good to go. And it’s almost latency free.” The UF8 and UC1 run under a single instance of SSL’s new 360° software; the UF8 stores all pertinent information, user setups and preferences. 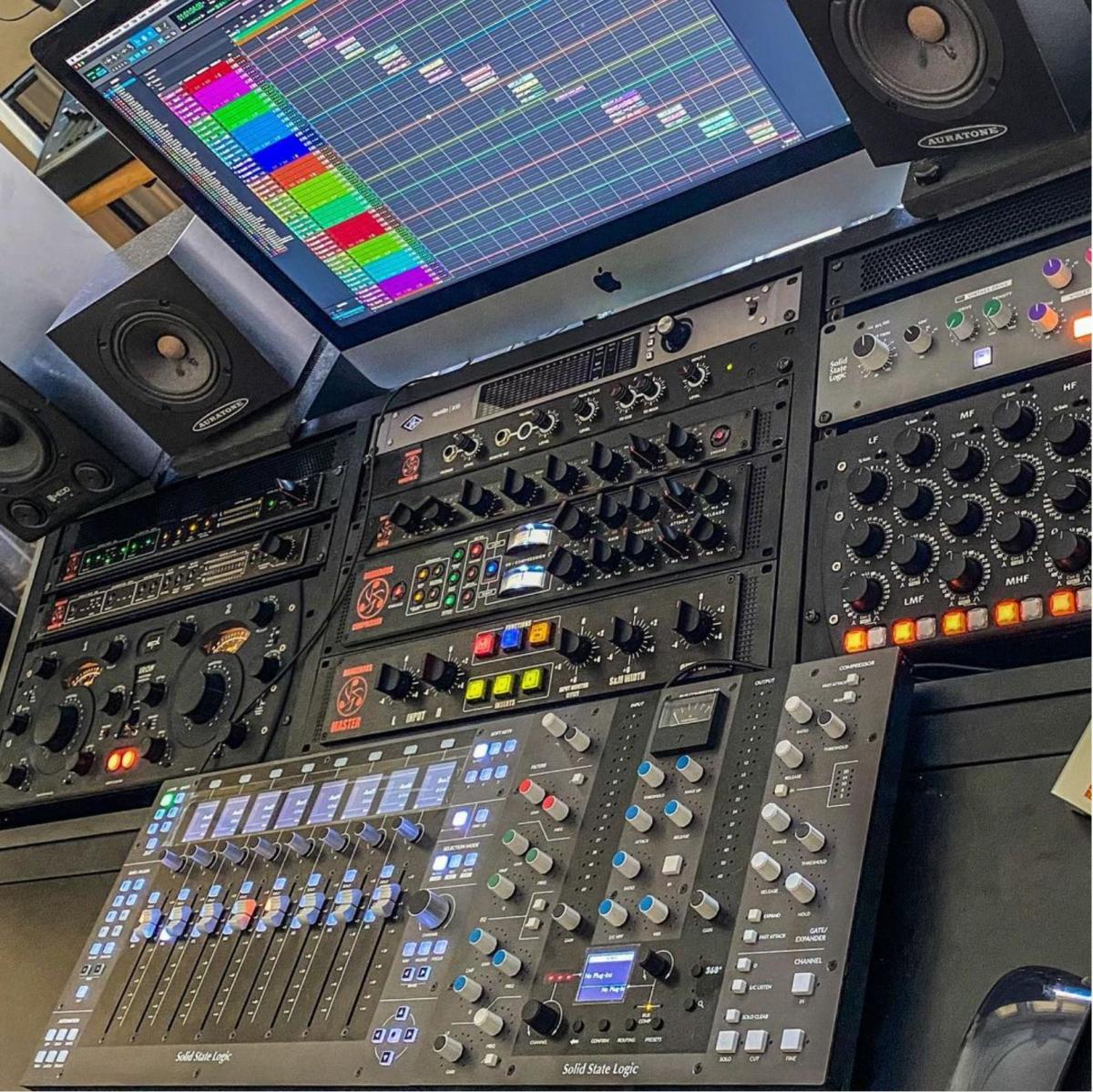 The UF8 controller enables a user to quickly switch between different DAW platforms. “Some days I do four or five mastering jobs in Pro Tools and I also do a lot of mixing jobs in Logic. The great thing is that you can switch between layers,” he says. “Pro Tools and Logic are running in parallel in the computer and my faders control it all.”

Obviously a fan of the SSL sound, Bühren also has an outboard SSL XLogic rack outfitted with a variety of E and G series EQ modules in addition to an SSL Fusion multi-processer, racked within arm’s reach, both of which he purchased with his AWS 948 console. “I have always loved the E series EQ,” he says. “There’s nothing comparable. It was a surgical EQ from the first moment.”

He reports that he started using plug-in recreations of SSL hardware as soon as the company began licensing third-party developers about 15 years ago. Then, earlier this year, SSL introduced a special price in Europe for its SSL Native plug-in collection, which includes the new Version 2 of the Channel Strip and Bus Compressor. “That has replaced all my other plug-ins for SSL,” he says. If he needs to introduce alternative tones and character using any of his other outboard hardware, he inserts it via his audio interface. “Just like a real board,” he says. “And I’m still here with my control surface and channel strip.”

Having worked over the years on a succession of hardware mixing desks and controllers, including the AWS 948, Bühren advises any engineers and mixers who have only worked in-the-box to try out the UF8 controller. “It gets you away from the mouse,” he says. “And it will help you be a better mix engineer.” 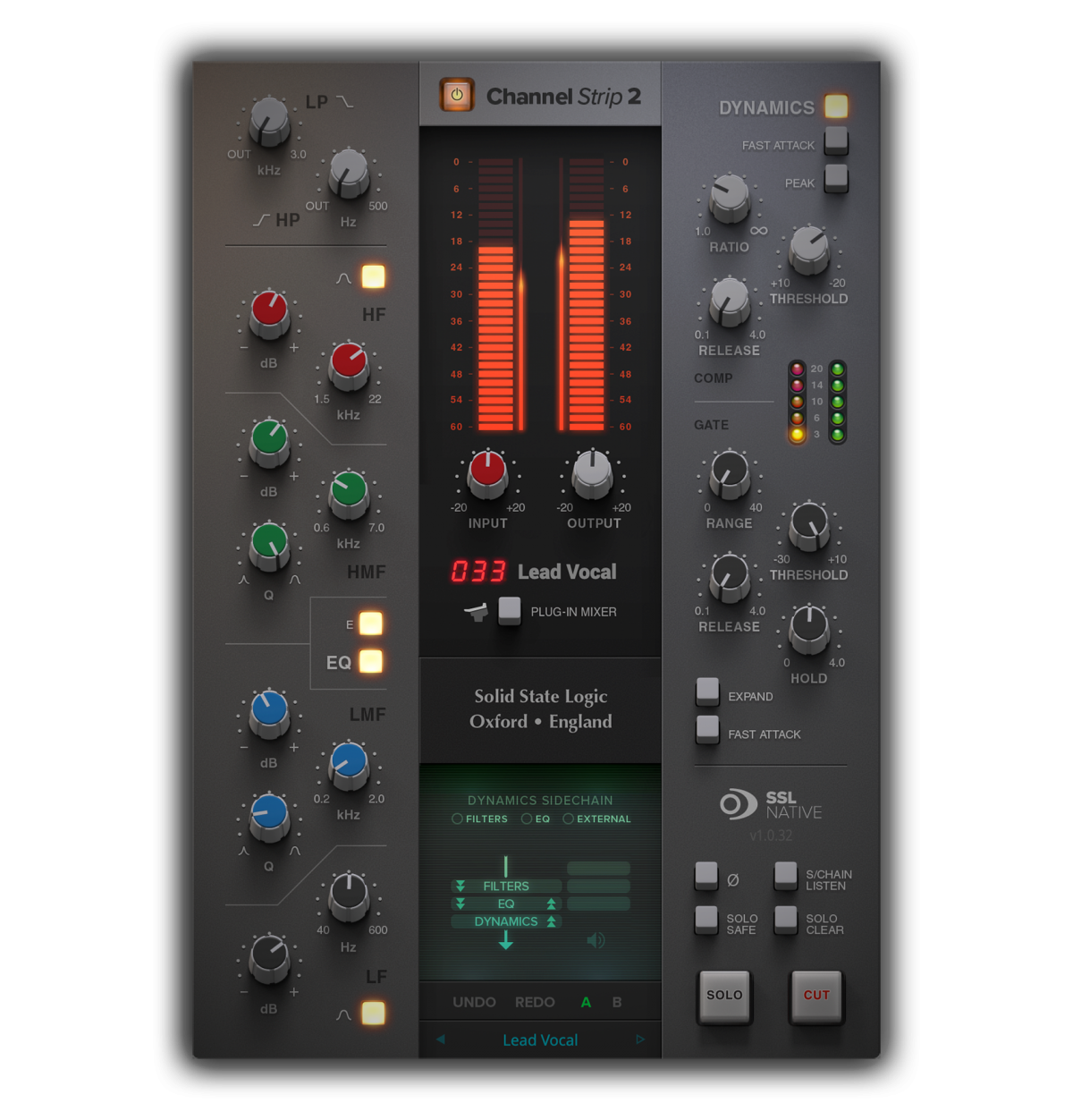