Sound designer and soundtrack creator for blockbuster franchises such as Deus Ex, Mass Effect, Tron and Quake says his SSL tools are 'indispensable' to his work

Los Angeles, California, July 5, 2022 — German-born artist, composer and producer Sascha Dikiciyan has been creating unique electronic synth soundtracks and organic sound design for blockbuster video game franchises such as Deus Ex, Mass Effect, Tron and Quake since the 1990s. These days, whether Dikiciyan is working in Los Angeles, where he was a longtime resident, or in his studio at home with his family in his native Berlin, Solid State Logic’s analogue Fusion stereo outboard processor and SiX compact desktop mixer have become indispensable tools as he crafts his sonic soundscapes. 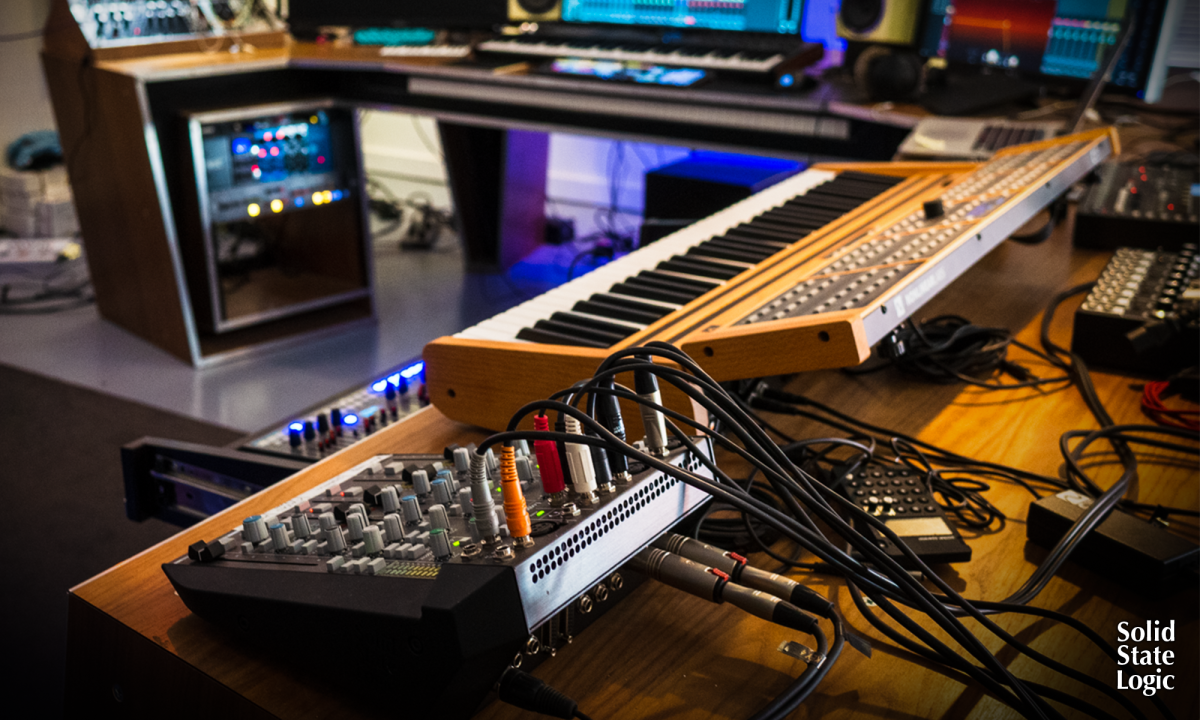 “I wouldn’t want to work without the Fusion,” says Dikiciyan, who also uses the moniker Sonic Mayhem and has additionally produced dance remixes for BT, Celldweller and others under the name Toksin. In fact, the Fusion is now a critical part of his signal flow, he says: “Because it’s at the end of the chain when I print, Fusion has allowed me to omit any mastering plug-ins. And what I really love about Fusion is that it’s so easy to use.”

Dikiciyan moved to Los Angeles 28 years ago to study. “I went to Musicians Institute in ’94 and learned on an SSL board,” he says. “So I’ve always had a thing for the SSL sound.” Since his first job, composing music for Activision’s award-winning Quake II in 1997, to the present day he has worked on over 45 video game projects while also producing and releasing a handful of music releases in his own right as well as creating software presets for the likes of Moog Music, Waldorf Music and Noiiz. 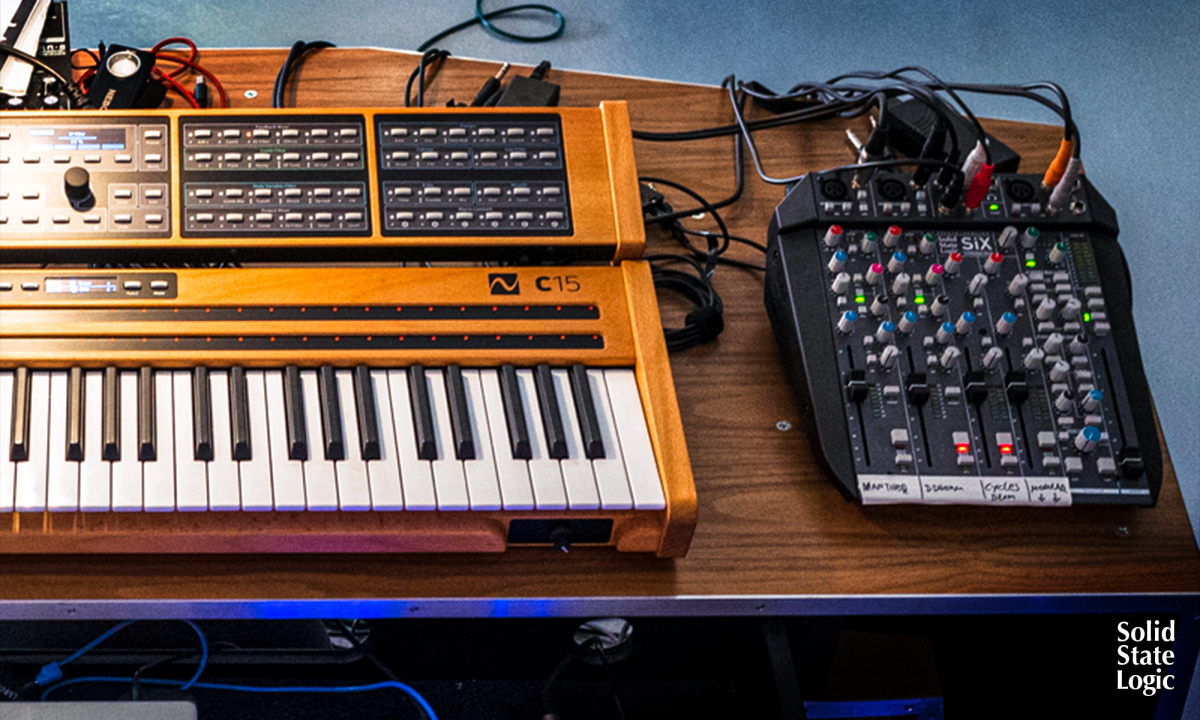 Getting that 'SSL fairy dust' with SiX
As for SSL’s compact mixer, he continues, “The SiX is one of the greatest things ever, in my opinion. For the price, there’s nothing on the market that can beat it. I’m using the SiX to put some of that SSL fairy dust on all my synths and to keep the noise level down and keep the sound at its most pristine. I have a lot of boutique tabletop synths that are mono. Some of them are pure analogue, so they emit a lot of noise when I turn up the volume. But when I put those synths through the SSL, they are quiet. And I put the G-Series Bus Compressor on everything.”

When Dikiciyan started at M.I. in Los Angeles he was already using Cubase as his sequencer and workstation, and he still uses it to this day. “Once I have everything the way I want it in the mix I bounce the track out of Cubase and into the Fusion. That’s where the magic starts,” he says.

He might have as many as 120 tracks running in Cubase on any given project, which he outputs into an eight-input outboard hardware summing unit. “I tend to mix as I work. In Cubase I have four master channels, so I usually put the percussion on one and two, the synths on three and four, anything low-end on five and six, and effects on seven and eight. Then I print those through the Fusion.” If someone else is mixing and he is instead providing stems, he adds, “I can select any track, put it through the Fusion and bounce it back into Cubase.”

Unlike the type of electronic music played in dance clubs, Dikiciyan continues, his game soundscapes generally feature a lot of dynamic range. As a result, if he wants to compress a sound source, he applies it to an individual track, not the entire mix. “I do it before I mix, so everything is neat and precise and perfect. Then the Fusion adds a little magic.”

A little goes a long way when he’s using Fusion to add tonal character, weight and space to his stereo stems or final mix. “Vintage Drive is great for adding that little bit of saturation. The Transformer button is very subtle, but you can hear a bit of crunch, especially in the low end. The ‘hidden’ compressor feature, the Listen Mic Compressor, is really great and adds a nice punch when it’s just kissing the source,” he says. He typically dials in just a modest amount of Space and Width in the Stereo Image section, too. “It seems like very little, but you can really hear the difference.” In fact, he says, “You don’t have to move any of the knobs too much to hear something.”

Dikiciyan uses his SiX, which can accommodate up to 12 inputs, to route his analogue tabletop synths and drum machines, including Malekko Heavy Industry’s Manther, Black Corporation’s Deckard’s Dream, Nonlinear Labs’ C15 and Elektron’s Model:Samples and Model:Cycles grooveboxes, to a separate outboard summing mixer and into Cubase. “The SiX EQ is great. And if I can reduce the noise as much as I can and get pristine sound from everything, that is my goal, because I can always dirty it up,” he says. “The Manther has a lot of noise and lacks a little on the low end. But when I first put it through the SiX and tested it, I said, are you kidding? This is amazing!” 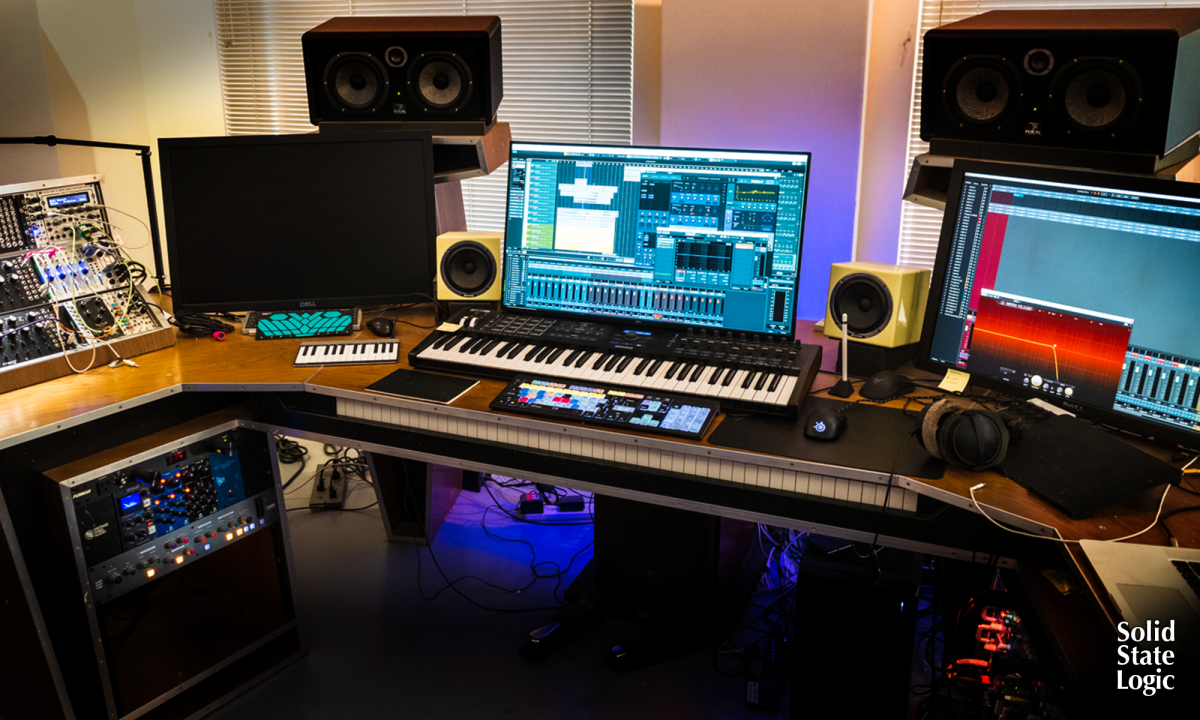 Telling the story with SSL

On any video game project, whether it is a story-driven or multiplayer game, he says, “Because I’m mainly an electronic guy, not an orchestra guy, my main approach has always been soundscapes” Plus, because Dikiciyan has been a gamer since the ‘80s, when he started out playing on Atari and Commodore machines, he knows exactly what other gamers expect of the soundtrack, he says: “I always tell the developers, don’t hire a movie guy, because they don’t know the sensibilities of the gamers.”

But whatever the project, he says, “I want to do something that nobody has heard before. My approach has always been to sound unique. I always tell the audio director, I have my own voice.”

The ultimate desktop mixer. SiX has a feature set driven by an obsessive desire for total flexibility and to encompass every creative eventuality.