LOS ANGELES –- In early 2018, mix and recording engineer Kenny Moran and music manager Christine Hufenbecher joined forces on a unique studio venture. Hufenbecher, who has managed writers and producers that have written for major artists like Justin Bieber, Dr Dre, Jason Derulo, Nicki Minaj, Selena Gomez and others, came up with the initial mobile studio idea based on how she observed the daily creative writing process.

“We were thinking about ways we could give artists, producers, and songwriters new and different inspiration by bringing them outside of their usual environment, and we thought what better way to achieve that than with a studio that can literally take you wherever you want to go.”

They set out to convert a Class C RV into a full-featured, professional grade roving studio that could go wherever inspiration might take them and their clients. Moran and Hufenbecher’s vision for their Mobile Sessions studio went beyond that of a quotidian portable recording environment — they envisioned a true ‘big studio experience’ on wheels that could serve multiple in studio and live recording purposes. At the heart of their vision is the SSL AWS 900+ SE console. 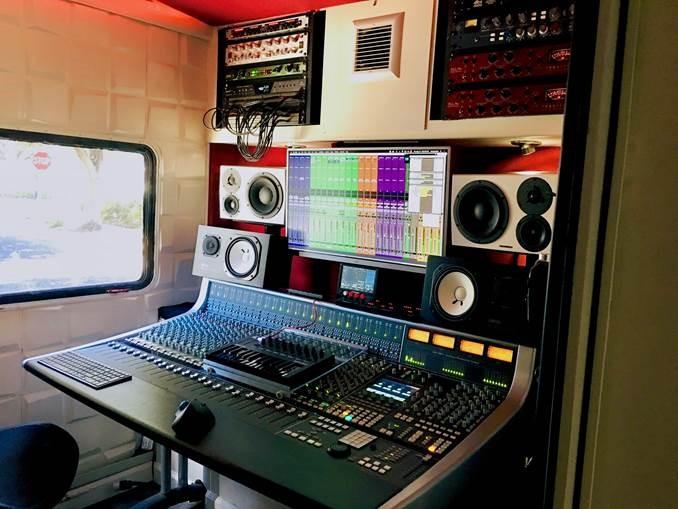 Built for the road

Moran and Hufenbecher spent 9 months designing and outfitting the RV. “We wanted people to walk in and immediately feel like they’re in a studio rather than an RV,” said Hufenbecher, whose clients as a manager have included the likes of Jonas Jeberg, Marlin "Hookman" Bonds, Justin Jesso, The Reasn and Theron “Neff-U” Feemster. That experience begins with the look of Mobile Sessions’s RV interior, which features a clean, modern aesthetic that mixes earthy tones with clean lines and plush leather seating, recalling the familiar look of big studio rooms around the world.

The AWS 900+ SE was the first piece of audio gear specified for Mobile Sessions. “As an engineer I really grew up on SSL consoles, so the idea of getting one for the RV came up right at the beginning,” said Moran, who has worked with artists like Earth, Wind & Fire, Chaka Kahn, JLo, Carly Rae Jepson and Theron “Neff-U” Feemster in his career as a recording and mix engineer. “We also knew we wanted to maintain the echelon of clients that Christine and I have been accustomed to working with over the years, which includes a number of serious hitmakers who expect to see the level of quality that SSL provides when they walk in the studio door.”

With space at a premium, the AWS 900+ SE was the clear choice, offering Moran and Hufenbecher the sound and performance of an SSL console in a compact, lightweight, and power-efficient package. “Fully operational, the whole studio uses only 9.6 amps, due in no small part to the efficiency of the AWS console and our custom power design,” Moran said. “We can run the whole studio with the exception of AC off of a single bedroom outlet.” The studio can also operate fully on generator power or from the RV’s auxiliary batteries if needed.

The light weight of the AWS console also helps Mobile Sessions save on gas and stay mobile. “Console included we only added 600 lbs to the RV in total, which is amazing and really key for fuel efficiency.”

After installing the console, Moran wired a 500-point patchbay to take maximum advantage of the AWS’s robust connectivity options. A pair of Antelope Audio Orion 32HD interfaces would provide the I/O he needed, and a pair of Dynaudio LYD 48 monitors completed his core mix environment. They then outfitted the studio with a selection of the most in-demand pieces of outboard gear, musical instruments, and DAWs as requested by their network of clients.

Completing comprehensive sound treatment to optimize the performance of his gear, Moran was able to hear for himself the big studio sound of his compact console. “The sound of the head-amps on both the mic pres and the line inputs is really punchy with just the right sheen on top, even with the EQ and dynamics off,” he says. “The top end on an SSL has always been in a different place than any other analog console and the AWS is no different.”

Moran utilizes the AWS’s stereo returns as eight additional channels for 32 channels of input during mixing. He also uses the external A and external B inputs to keep his prized selection of vintage and modern synths, drum machines, and other instruments wired and ready for use. “The console’s totally maxed out input-wise so that when you walk in and the console goes on, all the keyboards are live,” he says.”

Hands on the wheel 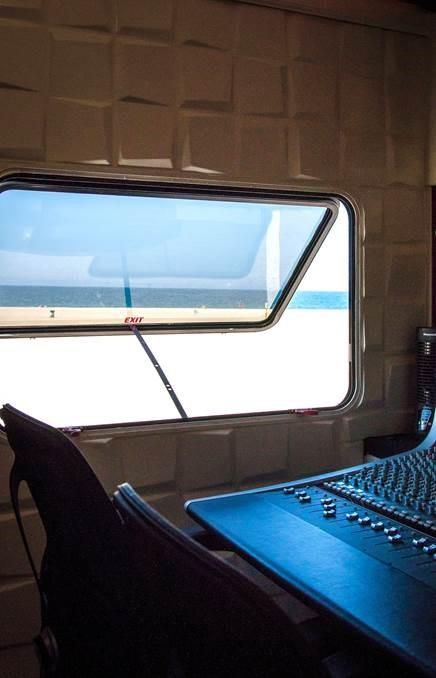 Whether controlling the DAW or mixing entirely in the analog domain, Moran relies on the tactile mixing experience provided by the AWS’s faders. “I love working with faders on a console,” he says. “Even if I’m working in the DAW I’m not one to sit there drawing in automation with a mouse, it’s much quicker for me to just grab the fader and do it. I’ll just put the AWS into DAW control and write my automation that way. I’ll typically start at -10 dB on the analog side with the DAW coming in, which leaves me with plenty of headroom.

The flexibility of the AWS’s analog EQ section has also proved valuable for Moran in the mix and a big part of the sound of the console. “It’s great having access to SSL EQS across all 24 channels on the AWS, especially with the switchable curve types,” he says. “The G EQ curves are my go-to for that familiar J Series experience that I’m used to, but I love that I can switch over to the E EQ curve on any given track with the push of a button as I see fit.”

Moran also relies on SSL’s software integration to speed up his work flow. “I use Total Recall on every mix, and also anytime I need to zero out the console,” he says. “It’s critical. I always use the software to name my digital scribble strips so it’s really clear to me what I’m working with when I pull a session back up.”

Have console, will travel

Not only is Mobile Sessions’s SSL console perfectly configured for Moran’s personal workflow, it also easily accommodates guest engineers and producers. “All of the major clients that Christine works with, which include some of the industry’s biggest producers, work on their laptops,” Moran says. “Then, when they’re ready to take the music to the next level by recording a vocal or live instruments, they move to a console to get that part done. The way we wired the studio, an artist or producer can connect their own laptop to the entire system with one USB cable and one ethernet cable. No file transfers or anything, and you have full control of the SSL. So that’s a big deal because it’s not something you can do easily at any other studio in LA.” 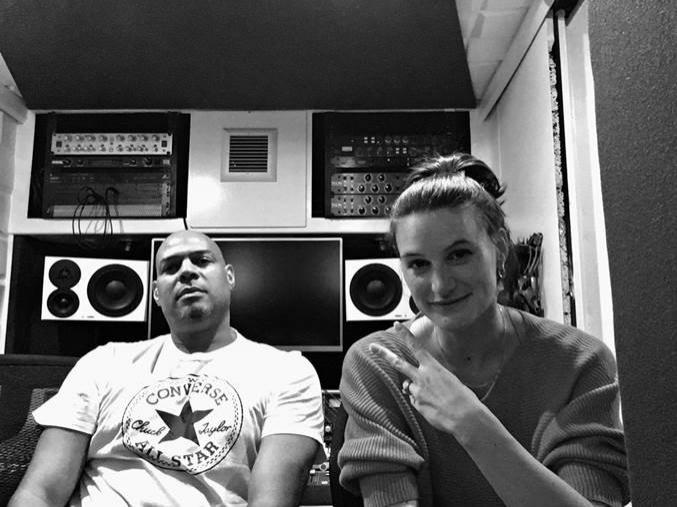 The connectivity also allows unique collaborative workflow possibilities for Moran and his clients. Moran explains: “They can be on their laptop beside me working in their preferred DAW with all of their individual tracks feeding through our interface into the console in real time while I’m working completely outside of the box laying things out on the console itself. It’s a really big concept. This is way beyond just plugging your laptop’s stereo out into the studio’s monitors.”

Live and in concert

In addition to hosting artists and producers in-studio, Mobile Sessions is designed to bring the power of the AWS 900+ SE to live recording environments. “We recently worked out the record path for Earth, Wind and Fire with a live orchestra at the Hollywood Bowl”, Moran says. Working with Earth Wind & Fire FoH engineer Terry “TJ” Jackson and Monitor engineer Terrence Chism, we looked at routing all of the band’s vocal mics and instruments directly into the SSL, while grabbing audience inputs and orchestra mics via Dante from FoH and Madi from monitor world. We came up with a 108-channel input list of analog, Dante and Madi signals all coming into the studio matrix with redundant dual systems recording ALL channels. “Even the major broadcast trucks don’t have an analog circuit path. They’ve got everything coming in digitally from FoH, where we’re able to take all of our key elements direct to console so that we can control the preamps like you would on a studio recording. So it’s an audio-first approach that’s pretty unique and delivers a superior sonic result.”

Mobile Sessions has also become a popular festival attraction for big name musicians and producers. “It’s like a playground for every musician that walks in here,” Hufenbecher says. “The first reaction to the lounge area is ‘this is a vibe’ — and then they walk back to the studio and they see the AWS console and they’re completely blown away. 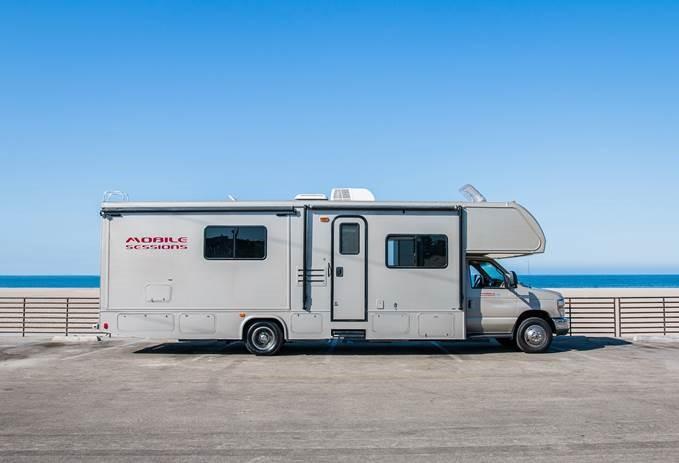 Recently, an appearance at Real Street Fest in Anaheim attracted some big-name visitors. The mobile studio was used as an on-site experience space for 1500 Sound Academy to raise awareness and for Fender Guitars to show off the new Fender Play online platform. “We had Bobby Avila (Usher, Miguel, Chaka Kahn) and Rance Dopson (Bruno Mars, Justin Timerlake) here in the RV doing a full-on session while there’s a festival going on around us. They spent hours inside working, then popping out and catching some of the acts, then coming back and bringing even more of their friends in. So it was a big 8-person jam session, with some big topliners in the mix and Kenny recording it all on the SSL. The next day they dropped by to grab the session files to take home. This event showed us the potential of how Mobile Sessions can function as a unique experiential studio for creatives as well as brands.

Other big name producers prefer to take Mobile Sessions and its AWS console to more clandestine locations. “We did a session at the beach in Malibu with Colby O’Donis (Lady Gaga, Akon) and he was really feeling it,” Hufenbecher says. “We’re at the beach with an SSL, real microphones, every instrument we could want, and we’ve got the windows open and ocean air coming in,” says Moran. “The response has been unbelievable all around. Morris Hayes, Prince’s musical director was here recently, and he lost his mind. The fact that he could sit down immediately and play any instrument right through an SSL was enough for him to say ‘I’m ready to go. I don’t need to go to any other big studio.”