LONDON, ENGLAND Last month, four-time Grammy-winner, Hugh Padgham, won the MPG Award for Outstanding Contribution to UK Music. His work and studio wisdom has influenced many a producer and artist over the years including The Police, Peter Gabriel, and Phil Collins. In fact, it was Padgham’s unique treatment of Collins’ drums on In The Air Tonight that made Townhouse’s Studio 2 (Stone Room) the go-to for recording drum sounds during the 1980s, with neighbouring Studio 1 being the recipient of SSL’s 1000th console.

“All of us at SSL congratulate Hugh on this prestigious and thoroughly deserved award,” says SSL's Chris Jenkins, Director of Commercial Applications and former Townhouse Studio Technical Engineer. “We are proud to have enjoyed such a long and successful relationship with him; he has been an inspiration to many, and will no doubt continue to excite future generations of engineers and producers for years to come.”

The Listen Mic and Compressor (LMC) was another great SSL innovation

“It was a real honour to be given the Outstanding Contribution Award by the MPG,” says Padgham. “I have had some awards before, but being given this one, voted for by my peers, made it the most special of all.”

Padgham recalls joining The Townhouse in late 1978, and how it was one of the first studios in the world to install an SSL console. 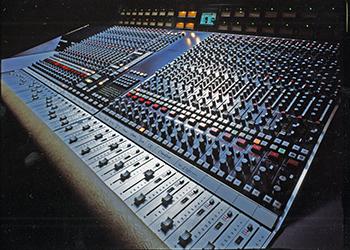 4000B - The first SSL console with LMC modification

“We were so happy to be able to have a compact in-line desk built in England that was great sounding and so modern and innovative,” he says. “For instance, in the old days, if you wanted a compressor or noise gate on your channel, you had to patch it in from an outboard rack; but with dynamics instantly available on every single channel, hey presto, all I had to do was press a button!”

Padgham goes so far as to say that he owes his whole career to SSL and The Townhouse.

“The Listen Mic and Compressor (LMC) was another great SSL innovation,” he reflects. “Before this, to hear what was going on in the studio, you had to plug in a mic and use up a precious channel. Again, now all I had to do was just press a button. So easy and quick! That meant that experimenting and messing around with effects using dynamics became a doddle, and accidentally opening up the LMC while Phil Collins was playing the drums one day changed my life! So thank you, SSL!”