SSL Duality Goes to Work at the House of Rock

Santa Rosa, California – House of Rock is a multi-faceted facility in Santa Rosa, California, that incorporates and integrates a live venue and a recording studio in a single site. The aim is to bring a vibrant music scene to the west-coast US wine county of Sonoma. The main drivers in this will be Evan Alexander, who will be running the live side of the business, and Jared Havens, Studio Manager and Engineer. The console choice is a 48-channel SSL Duality δelta SuperAnalogue console. 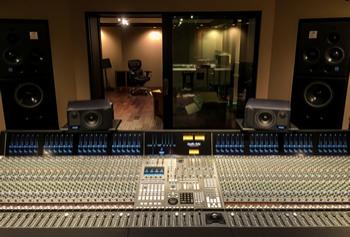 With VHD they don't need any other consoles - it's one console for recording and mixing. That's probably its biggest advantage.
Jared Havens

The studio was designed by Arthur Kelm, Chief Engineer at Capitol Records. Its control room and the three isolation rooms overlook the House of Rock stage area from the second storey, which is connected to the studio via 48 analogue lines and 64 channels of MADI. This means that the studio is also a read-to-rock auxiliary facility for live events and productions, and vice versa - using the stage as a recording space for whole bands or drum kits, and so on.

"It's a great set-up," says Havens. "As well as the main recording activities, we've already had a few music video recordings here, and the SSL is wired up to stream mixes online so we can broadcast concerts with HD video and a live SSL studio-console mix!”

The choice of console for the studio was driven by client demand. According to Havens, a visiting producer was a disappointed with the in-the-box solution that was already installed - even with high-end console-style control. "The then-owner of the studio was a bit upset that he didn't, apparently, own the coolest studio in the world!” says Havens. “So, after some consultation we bought a brand-new Duality… Now we have the studio we always wanted, and as an engineer I couldn't be happier; the console sounds amazing."

Havens has extensive experience with many of the classic analogue studio consoles and is certain that one of the main selling points for the Duality is its VHD (Variable Harmonic Drive) pre-amp - an SSL patented circuit that gives the user control over a blend of second and third-harmonic distortion characteristics - anywhere from ultra-clean SuperAnalogue to warm hugs, to transistor trash: "I've done a lot sessions in the past where people have insisted on recording through a particular 'flavour' of console and then mixing on an SSL," says Havens. "With VHD they don't need any other consoles - it's one console for recording and mixing. That's probably its biggest advantage."

It's exciting times at House of Rock. The new commercial outlook is feeding a New Year re-launch of the studio and the venue, and looks set to do great things for the area.

Havens: "We've got a lot of colleagues interested in Engineer residencies, and bands looking at door-deals to do shows. That will bring in more music people and we can get them interested in recording here."