MEXICO CITY, MEXICO – Los Temerarios are one of Mexico's biggest bands. With a career spanning over 40 years and 20 albums, the Grammy-nominated act are still selling out arenas across the globe, attracting over 10,000 fans to each show. To ensure the best audio production for each show, revered FOH live engineer, Juan Payan, decided to take the new SSL L100 and Remote Tile on the road for their new tour. With Payan's partner in sound, Juan Carlos Granados, also on an L100 and Remote Tile at monitors, everything is sounding and performing better than ever before.

It was through a training event with SSL's live specialist Fernando Guzman, that Payan first heard the SSL L100 in action. 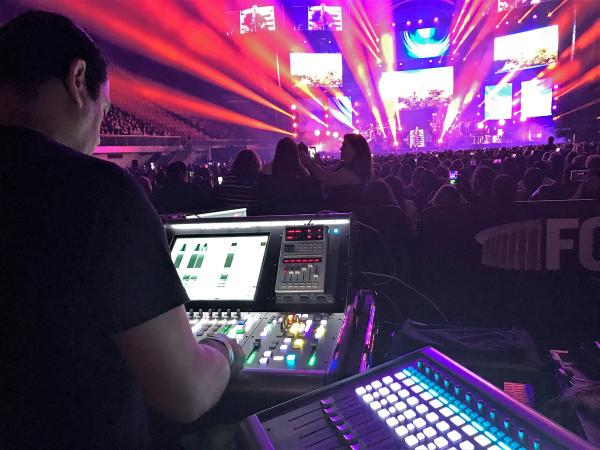 “It was during this event that the sound of the console immediately impressed me. I knew I needed to have one,” Payan explains. “I've had it out on the road with me since February, and everything has been working perfectly – no issues at all.”

Payan says it was a combination of factors that drew him to the console, from the dynamics to the overall sonics.

“I really love the preamps and I don't need to touch the gain, because it instantly sounds amazing. The separation I can get between the instruments allows me to generate real width in my mix,” he says. Payan is running 52 channels at FOH, and the band is a seven-piece. A big sounding band needs a big sound, he says – and he is able to achieve that thanks to the SSL.

“The EQ is also amazing – as soon as you dial it in, you can tell it's very reactive, and easy to tap into any frequency. Plus, I use the SSL reverbs on my drums and vocals, and I utilise the delays a lot across the console.”

“Everything that comes through this console is very clear – there is no muddiness whatsoever,” Payan insists. “It's way better sonically, and I am getting much more clarity than I was when using my previous console. I also multi-track each show using Pro Tools, and the quality of the recordings now are very impressive.”

Payan concludes, “The shows have been fantastic, and it's down to us having the best audio setup we could possibly have.”

"We started this year with the fabulous news about the purchase of an SSLlive L100 console and Remote Tile for the 2019 Tour. It was a great surprise for us that the Group has decided to invest in the best console in the market." explains Carlos. "We were previously working with 48kHz SRC systems that was leaving sonic artefacts. So far, it was very good, however, the jump to a native 96kHz SRC system and a 64-bit processor it made a stunning difference at the first kick drum strike. It was a huge change in sonic performance compared to our previous console! The Artists (Adolfo and Gustavo) and the Band immediately noticed the changes (we have a magnificent 7-piece Band who are all exceptional musicians). Talking about me: I was absolutely impressed… it was like having the studio sound transported to the Stage." 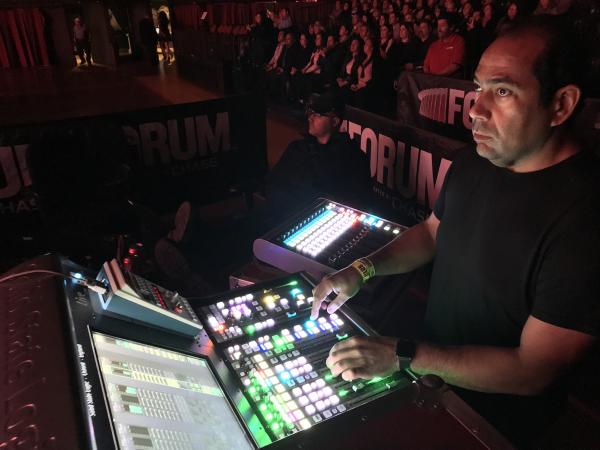 Carlos attributes the increase in sonic performance to a number of factors "The Super Analogue preamps are having an amazing frequency response like no other console I ever used before. The sensitivity and precision that I have at every step on the surface is amazing...The internal signal processing (EQ, Dynamics, FX) has removed from my world the use of the external plug-ins server that I was using before to ‘fix’ another consoles sound. This console does not need any help to do a great job. I used to use the ´SSL Channel Strip´ and the ´SSL Bus Compressor´ as a part of my mixing tools. Now my signal is passing thru the real SSL analog pre, so no more makeup or emulators are needed."

"The SSLlive L100 is amazingly compact and powerful. I can set-up the console in almost any location without a problem. The Fader Extension Tile is giving me a faster reaction time and it is very comfortable because it can be placed whenever I want. My experience with SSLlive is like driving the best race car on the track. It has been one of the most spectacular sonic experiences I have ever had. There is no doubt in my mind that we are in the best hands using, the best technology available in the Market... Thank you SSL"