Ricardo Arjona is one of the most successful Latin American artists of all time, with fifteen studio albums and two live albums released since 1985, over 40 million album sales, and many music awards to his name. His latest stadium and arena tour runs until half way through 2018 and takes in many of the biggest and most prestigious venues in North and South America, including an early stop at Madison Square Garden. Accompanying Arjona on this adventure is Front Of House Engineer Dani Munoz and a new SSL Live L300 console. 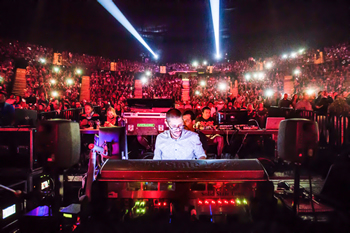 Arjona is known for large-scale, theatrical live shows, taking in a new theme each time he goes out. This time round it's based around the new album Circo Soledad (Solitude Circus), and comes complete with aerial dance, clowns, and lots of circus scenery, and huge video and lighting rig. From the stage the show runs to around 64 live inputs though SSL ML 32.32 SuperAnalogue stageboxes via an SSL BL II.D Blacklight II concentrator. The band consists of drums, percussion, bass, two guitars, and three multi-instrumentalists on strings, saxophone, and synthesisers. "It's a challenge in the sense that there are a lot of acoustic instruments," says Munoz. "And because of that, there are a lot of mics open at the same time in what can be very reverberant arenas.

"My aim is always to achieve both power and detail, so I pay a great deal of attention to tuning the PA myself… I get my own measurements and traces, even for house PAs... The system has to be on-point because once the show starts rolling, that's your constant..."

Another aspect of this is a rehearsal mode that doesn't skimp on quality. According to Munoz, not all virtual soundchecks are created equal: "The SSL virtual sound check - Rehearsal Mode - is fantastic. I've tried other ones before and their sound can be compromised sometimes. This time around I’m super-happy. The only thing I have to account for is the room, but I can play the show and walk around the venue and get a really clear idea of what's happening."

Part of The Show

Munoz feels a clear responsibility to be deeply involved with all aspects of the sound and the mix - considering the actual show to be a culmination of work, rather than the work itself. "Pushing faders is the easy part - the final step," he explains. "The technical and creative preparation, and your relationship with the Musical Director, your peers, and the artist - those are the most important things." Munoz records every show as he's often asked for recordings that the artists can check, sometimes only hours after the performance. "It's a two-hour show, so it isn’t really practical to go back and mix in again, so I simply record the left and right, mix in it with some crowd mics, and give them that. Those recordings have to be right."

This is Munoz's first time on tour with Arjona, and the perfect excuse to try an SSL Live console - something he'd been wanting to do for some time. "It started well,” he says. “Of all the people I called, SSL were the nicest and most helpful - and before the day was out, I was at the LA office talking about consoles!"

The Sound's The Thing

The big decision for Munoz - the final choice of SSL for the Arjona tour - came down to one simple thing: "It was the sound," he says. "I'd tried pretty much every other console out there, from the big players... This was the best.

And I've been proved right, because the tour is going very well and we've had great feedback on the sound of it. I tell everyone who might be interested that the console is unique - there is no other console out there that sounds like that. I don't know what it is - the summing, the pre-amps, the processing - you can fit a such lot into it. I can throw a sax solo into the middle of a big heavy rock section and it'll come out fine." 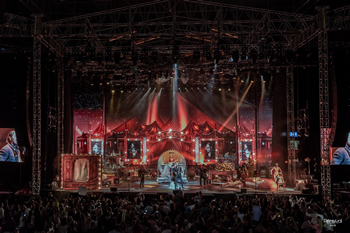 Ricardo Arjona shows are known for their ambitious production.

Munoz has turned to the special Stem group instead of VCAs to make the show more manageable. Stems are a bit like auxiliaries, but have full processing paths with insert points, and can be routed onwards to other Stems, Masters, and so on. You can also use the Super Query button to interrogate Stems and have the console lay out the contributing paths across another fader tile. "The Stems have kind of killed VCAs for me! It's a full-processed group path with two insert points, which is genius - and the fact that I can rearrange the process order, that's great. I feel like I'm plugging everything in myself.

I also love having more than one master. I can have a true music master and process that for the band, and have another one for the boss - Ricardo. I can hug the band with a nice SSL bus compressor and process it on its own without affecting the intelligibility in the lead vocal.
Dani Munoz 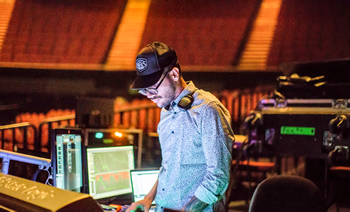 As an Arjona show is quite an acoustic set, Munoz has to keep the more adventurous effects to a minimum, but there are still plenty of effects in the SSL's internal FX Rack that do suit the show. "I do like the Guitar Chorus effect - that's very handy. I also use the Transient Shaper for percussion - to spice things up a little bit... And I love the Enhancer; I put that on the masters along with the bus compressor."

The Ricardo Arjona Circo Soledad show is a large event, with lots of sonic challenges for Munoz, presented by a wide range of acoustic instruments and often very reverberant venues. He views the SSL as another constant in that mix - something he can rely on: "I love the console. It's the best sounding console out there. I'll do an A-B any day. If anybody needs convincing, I just tell them - grab a '52, put it on a kick drum, and turn it up. It's as simple as that."