SSL LIVE COMING THROUGH LOUD AND CLEAR FOR THE VOICE FRANCE

PARIS, FRANCE – The Voice France is broadcast on TF1, the largest private French TV station, during prime time on Saturday nights. Set in Studio 217 at La Plaine Saint Denis, just north of Paris, its stage is the largest in Europe at 2090 square metres, with a 1,300 capacity. As with any major broadcast event, it's a meticulous, multi-console affair, and requires a plethora of inputs. FOH engineer, Jerome Kalfon, and monitor engineer, Alex Maggi, are both working from SSL L500s to mix the show.

The Voice France is a serious operation: the show utilises 128 mics, four SSL ML32.32 stage boxes, and an SSL BL II - Blacklight Concentrator, the latter of which allows both FOH and monitors to share all the inputs. The two broadcast consoles in the OB van receive inputs directly from inbuilt broadcast MADI splitters located at the back of the stage boxes, and the broadcast mix comes directly from the SSL mic amps and SSL conversion.

Jerome Kalfon has used the SSL at FOH for three years on The Voice, and enjoys working from it even more now than when he first started, testament to all the feature enhancements that have been implemented along the way.
“This is such a sophisticated musical show, where each song is sung by a different performer, with a different ambience and style, so setup can be radically different from one title to the other. For the live shows it is very intense to manage the music mix, and also to deal with the frantic comms between all the production teams, such as the video sequences being fired from the OB van. It's so often the way when you're working on a demanding TV show,” says Jerome, whose position at FOH is high up in a tower. “Because of my mix position, I find I am using the [SSL] TACO tablet software extensively; it provides pretty much all I need when I have to go downstairs and adjust the mix from the audience and the coaches' seats via WiFi. It is very fluid, and it even has the Query mode allowing me to jump between groups of signals easily.”

Alex Maggi has been an SSL Live advocate since the consoles inception in September 2013. His monitor position is a little unusual: just behind the musicians, and their 'very loud' guitar amplifiers.
“It's like being in a guitarist's bedroom back there, so I need to keep a close eye on the balance,” he says, with a smile. “I find the L500 makes my workflow faster and easier, and it doesn't force you to work in a specific way. As a result, I can provide a better sounding mix much quicker for the musicians, with less effort – and for me, speed is everything.”

Since he started out using SSL Live, Maggi has been able to do away with all of his outboard.
“That is such a comfort,” he admits. “Less equipment to move around, and a much easier way to create the mixes. I use the ER VERB a lot, and I'm using mainly the Ambient on voices, the Plate Verb and LeVerb on the instruments, and often the Dynamic EQ, Contour EQ, and of course some 32-band graphic EQ. Typically, I'm using up to 40 internal plugins on top of all the channels and buses.”

Kalfon also loves the internal FX on his SSL, and since creating his own internal FX library, he's even been able to ditch his trusted TC6000 reverb unit.
“It seems there is some form of magic within the SSL reverbs; they somehow get 'into the mix' in a very smooth and natural way; and I also like to use the multi-bands and dynamic EQs,” he explains. “Then there's Automix... I would struggle to control the Coaches' mics without it, as nothing is scripted and you have to keep all mics open at any time while keeping out the background noise. Automix is literally doing that for me, and the latest SSL software update now allows for up to 24 legs, which gives me even more flexibility without having to use a second Automix plugin.” Kalfon knew when he pushed the faders up on his SSL for the first time on The Voice that good things were about to happen.

Step Up In Sonic Quality

“There were immediate reactions from members of the orchestra and the production team; people were coming to me asking, 'oh, wow, what did you change here?'” he enthuses. “The whole sonic impression was totally different, and it was an incredible contrast to what I'd used before in terms of stereo image and depth - everything was sounding much larger, but also so much more precise and still very musical. Since moving to the SSL, I no longer have to fight to get a stable and precise sound for the mid range – it's just there, and each element of the show sounds better.

“Because things are so fluid on the SSL surface, whatever I want to achieve, I can find a way to do it – and very quickly. As an example, using the latest software, I can take an EQ from the internal SSL FX Rack, define that FX as being multi-channel, and use any plugin as a group, with one Master curve on them all when required, yet still adjust each channel individually when you need to.” 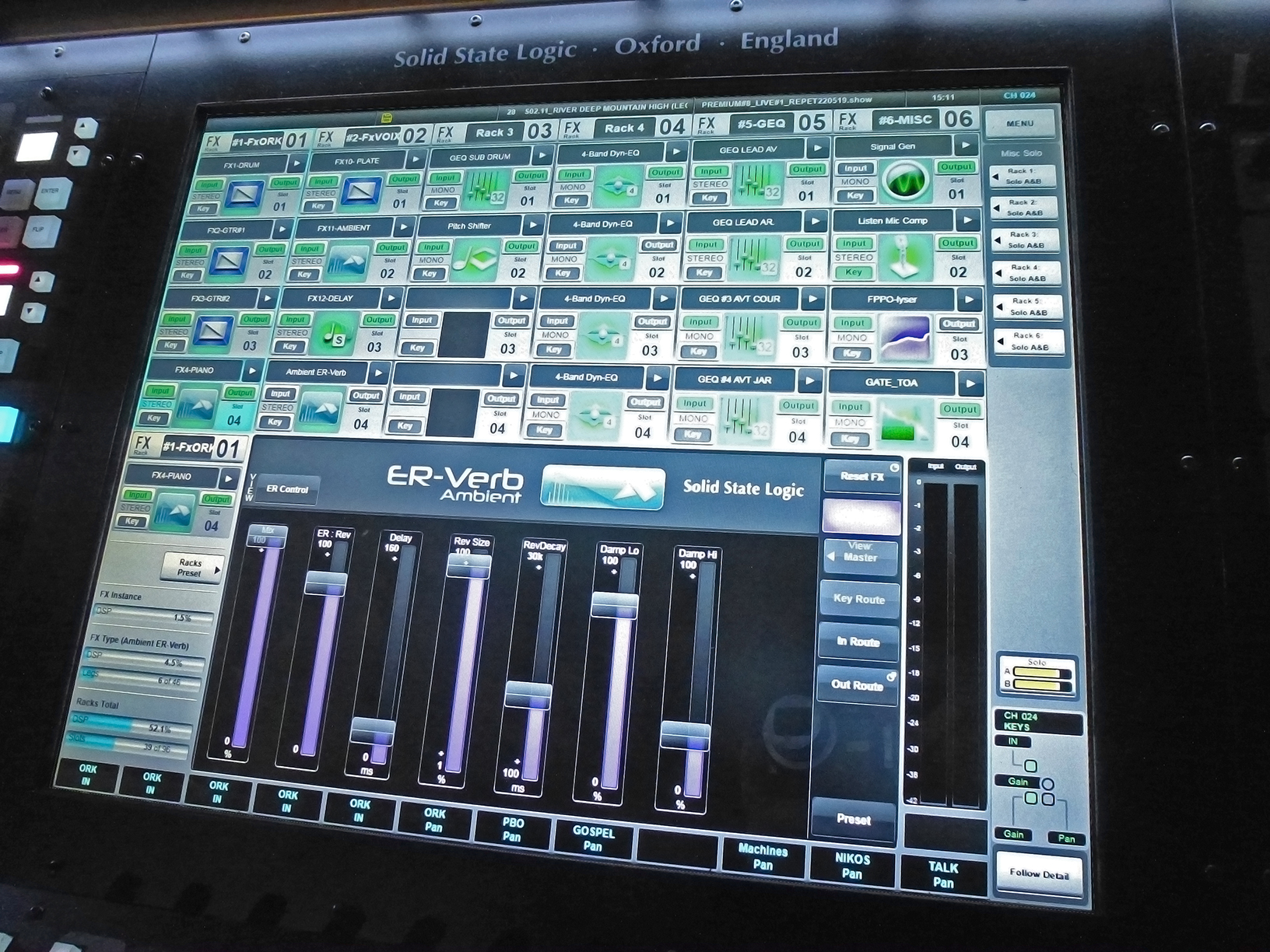 In terms of standout features, both engineers cite more than a few.
“The Expanded and Compressed Query modes, and the global benefits of an enhanced workflow are really fantastic,” Maggi insists. “For example, the SELECT key and its multi-SELECT possibility is very intuitive and efficient; and I love the L500’s layout, having my auxes on the top left panel, and my contributions on the horizontal faders. Also, I would point out its rock solid reliability, as that's always such a major concern for me.”
“The flexible and fast menu structure including the Banks/Layer Manager, with its unique drag and drop, makes for a super-fast setup and quick adjustment on any parameter,” adds Kalfon. “I can now control my preferred plugins from the SSL FX Rack; I can add channels or buses, then add those extra resources to any bank or any layer at any point.”

Since it first hit French TV screens in February 2012, The Voice France has enjoyed eight seasons and 128 episodes of success; and with impressive viewing figures of 7.1m last year, it looks set to keep its place as one of France's most popular shows for the foreseeable future.