OXFORD, ENGLAND - Monitor engineer Gavin Tempany has been out on tour with pop principal Kylie Minogue. He has chosen a Solid State Logic L500 Plus for the shows, supplied by UK tour and events company Capital Sound Hire. 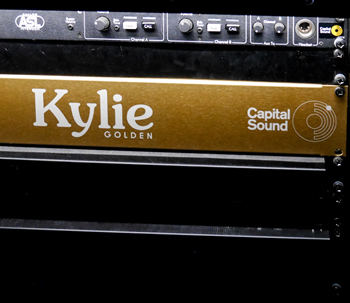 Kylie's latest world tour follows the release of her new album, Golden. It's a project heavily influenced by the Nashville country scene, which follows through onto the stage via set, costume, and narrative in a typically theatrical set. Kylie is joined on stage by five musicians and two backing singers, and all are supported at monitor world by experienced engineer Gavin Tempany (Dave Gilmour, Hans Zimmer, Will Young, OMD) and a Solid State Logic 500 Plus console.

While Tempany describes the 50 or so instrument and vocal inputs from show as "not too much compared to my usual madness," the aesthetics and design of the show have created a few side challenges. First, the monitor console position is under the stage, so video feeds are used for sight to stage. The backline is also under the stage, out of sight, as are the guitar and bass pedal boards.

These things all make good communications even more critical than usual, and as Tempany is also the hub for band-to-band and band-to-crew communications, the monitor position has additional critical roles. “There are a lot of talkback mics," says Tempany. "I think I'm up to 17 channels of communications now. All the musicians and techs have shout mics and there are a few techs with switches that route their talk either to the band and crew or just to the crew.

"The production comms are also fed to my cue bus so we can follow what is happening at the top of the show. This all means that the Cue mix is quite busy with not only the solo bus in play, but a lot of information being passed around on top of it."

On stage and up front, Kylie herself uses four microphones in custom colours to match her costume choices. Tempany uses the SSL's Stem Group path type to group all four microphones as a single input to the monitor mixes. "It becomes one fader and one channel where I can adjust levels, EQ, and dynamics for all four mics during a show," he explains. "If one player wants to vocal up a bit, I simply do a group automation change in relative mode on that stem in their mix. It then scales for all mics through the show.” 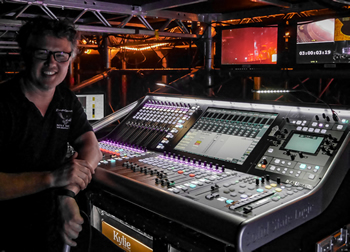 Tempany’s use of Stem Groups is a useful strategy throughout the show. He also makes good use of them on the drum kit, for example, using one stem for four kick channels, one for four snare channels (including reverb), and another for the remaining kit. "It makes dialling up mixes very fast, and changes really easy," he notes. "A request for 'more kick' translates into a single fader move on the kick stem. I don't have to search for which kick is used in that song. Everything happens fast, which is great for the band.”

Tempany has had plenty of previous experience with SSL Live consoles, notably using an L500 Plus on Dave Gilmour's Rattle That Lock tour and at several WOMAD festivals. He has been impressed with the development of the range over that time: "One of the really useful new features is Screen Query," he says. "You can now query an on-screen channel rather than a fader-tile channel, so all the available tiles can be used for the query result. It's great if you have a lot of channels on an L500, or it can make using an L300 feel like using a three-tiled L500."

However, Tempany also states that his primary reasons for continuing to specify SSL Live remain unchanged: "I just love the sound, and the reliability, of SSL Live.”