Oxford, England - Solid State Logic took home a trio of honours from the 33rd TEC Awards at the recent NAMM show, including the induction of the SSL AWS 900 studio console into the prestigious TEC Awards Hall of Fame. The other wins were Technical awards for the SSL Nucleus2 system in the Small Format Console category, and SSL's AWS δelta V2 in the Large Format Console Technology category. 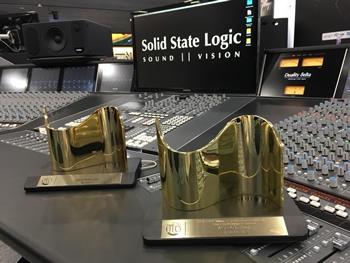 The AWS and Nucleus TEC awards.

Launched in 2004, AWS 900 reinvented the professional production console by combining classic SSL SuperAnalogue™ console technology with comprehensive DAW control hardware in a single work surface. It pioneered flexible, hybrid studio workflow and quickly established itself as a benchmark in sound quality, ergonomics, automation, and DAW control. Original AWS 900s can still be upgraded all the way to the latest δelta spec, and still benefit from SSL's legendary - and long-term - customer support.

The designer of the AWS 900 and SSL's Director of Commercial Applications, Chris Jenkins, was always aware that the AWS project was something special: "Engineers and producers needed a reduced footprint and a better value proposition for smaller spaces without compromising quality or creativity." he says. "And they didn't want to have to choose between an analogue audio path, DAW control, and the sweet spot… So we set about integrating everything and bringing a wide range of SSL magic to a new type of user…. We're very proud that AWS has made it into the TEC Hall of Fame."

This year's Large Format Console category winner - AWS δelta V2 - is proof that the AWS legacy is alive and well, and continuing to evolve - exceeding the expectations of creative audio professional everywhere.