LONDON, UK - Popular Portuguese singer, musician, and songwriter, Pedro Abrunhosa, who is as well known for his great music and refined songwriting as he is for his fondness for wearing sunglasses in public, is currently on tour across the country. Known for his large, live band and penchant for straddling different genres of music, the singer’s FOH engineer, Joao Bessa, relies on an SSL L200 to make his hands-on approach to live jamming a breeze.

Starting out in the studio and honing his craft for 14 years on an SSL 4000E console, Bessa eventually made what he calls the 'natural transition' to live engineering. “The transition between the studio and the road was so natural to me: in my head, it's just mixing sounds and textures, and that is the thing I like to do,” he explains. “It's a completely creative art, and it's that which really interests me. I have tech knowledge, but I am not scientific - I just need to know the tools, and to know what I am doing, then switch that off and take care of the creative stuff.”

Bessa has been a freelance FOH engineer on the live circuit for 12 years, and currently spends the majority of his time split between touring with Abrunhosa and internationally recognised Portuguese fado singer, Ana Moura, who herself has gigged with Prince and The Rolling Stones. “Abrunhosa has been a very big star in Portugal for the last 25 years, and I have known him for 12 years on the road,” says Bessa. “He has a big band - his music goes for a very broad style. He does great funk, and rock and roll and ballads: a real, complete artist, and a great composer for other artists, too. A stage animal - every concert is a huge party!”

Helping Bessa thrive during Abrunhosa’s concerts is an SSL L200 console, supplied by rental company, AUDIOGLOBO. “My first ever concert with the SSL L200 was on New Year’s Eve 2018, doing a show for 200,000 people on the Main Square in Porto, Avenida dos Aliados,” he remembers. “It was a four-hour, 45 minute show! Not bad for a first show with a new mixer! I just had the console at my studio for a few days to learn it and prepare some mix moves, and that was it. It's been great ever since.”

One of Bessa’s favourite console features is the space to fill in the mix that the SSL L200 provides. “Simply, I can balance the mix and fill the spaces, adding lots of inputs - and everything fits tightly, with elegance; no other console can do this,” he insists. “And that's without the mix being too dense, or the sound becoming claustrophobic. The sound stage and the depth is huge.” 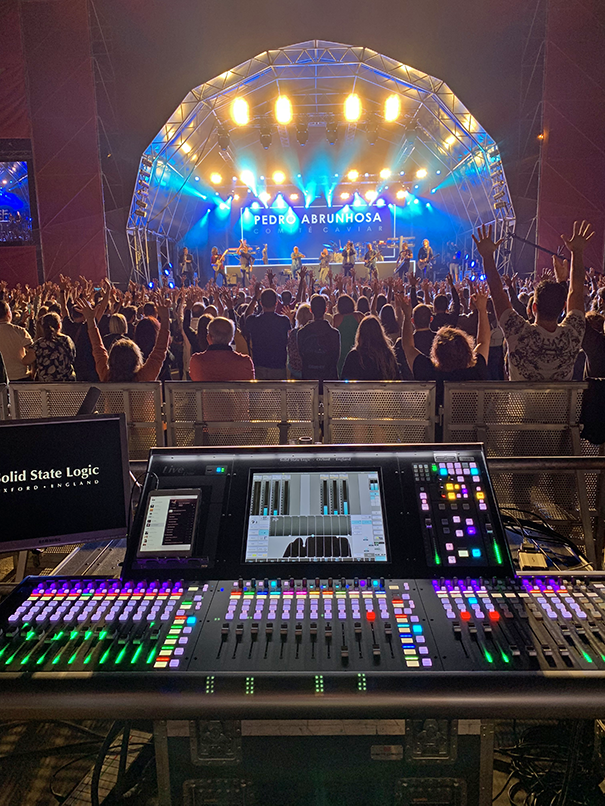 Bessa spent much of his career using an analogue console, however found that this did not lend itself well to life on the road. “I am a studio guy and I want to do the same thing as on the records, but out on the road,” he explains. “The digital sound was not working for me, back then; after a while, I was doing many turnarounds with plugins on top of plugins just to correct things that were not good at the front of the mixer.” Bessa knew that he needed a more modern, digital console. "I had two choices: update to a new mixer with plugins, or go for a more direct approach with a better sounding desk that will not require me to use plugins as much, due to the fact that it will sound better.”

The band Bessa works with is 'completely live', as he explains:
“Because of this, sometimes it becomes almost a jam session, so the console had to be one I could operate as if it were analogue, with hands-on faders and some automation. I needed a practical mixer that sounded amazing, and that is exactly what I found with the SSL L200. I am amazed by it! It was my first choice - this is the best-sounding digital desk. Plus, it sounds great right away - before you dial anything in.”

After using it once, Bessa knew that the SSL L200 fit perfectly with his workflow. “The sonics were, for me, the first choice; and then I wanted something I could work naturally with,” he elaborates. “It is the most natural digital product I have ever heard – there is something in the sound I cannot compare with other digital consoles. You can just configure it however you want – all faders in any style you want, mix inputs with outputs, and stems with auxes - and that is the way I approach things. I want to have the faders, not just one-to-one, and I want them organised in the way I am thinking. The second thing that was very natural for me and good to work with, was organising sessions.”

Although these aren’t the only standout features that Bessa is impressed with: “It's not just one thing, it's everything! The flexibility of arranging all the channels is incredible, and it's very simple to do. Another is the fact you can tune the phase by frequency - that is brilliant.” Also topping Bessa’s list of useful functions is the accuracy of the EQ - finding that minimal adjustments are more than sufficient - in addition to the desk’s stem-mix query functions. “The L200 doesn't have a specific colour, but the sound is full and quick - transients are all there, it's transparent, and it sounds really great,” concludes Bessa. “Maybe it's the preamps, the converters, the summing... I don't know. The whole combination is just perfect for me!”