Texas, USA - Southcrest Baptist Church in Lubbock, Texas has built a new 1600-capacity Worship Centre with two SSL Live L300 consoles at the heart of its sophisticated audio production operation, for PA, live streaming, and TV. One L300 console manages both Front of House and Monitor duties for the live services, while another is used for a live-streamed broadcast mix, recording, and post production for archived services and TV syndication. 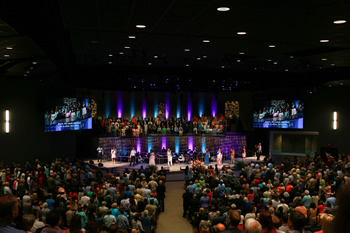 Service in full swing at Southcrest.

Southcrest Baptist Church is a long standing and popular member of the Lubbock community, and as such its original Worship Centre - now called 'The Venue' - had been operating at full capacity for every service, for some time. "The new Worship Centre was long over-due," says Rusty Trowbridge, the Technical Director at Southcrest. "The project has taken two years to complete and has doubled the square footage of the church, as well as increasing capacity significantly... The Venue has 750 seats, and the new Centre has 1600."

The church now runs four Sunday services - three large productions at the worship centre with full choir and orchestra, and one 9.30am service at The Venue with a five-piece band and the pastor's message streamed from the main 9.30am service via a live recorder. It also broadcasts a live stream via apps on all major mobile devices and platforms, and distributes music and sermons to four TV stations in the local area. There are seven staff in the Media Team at the church, and everybody else involved in the production and performance side are volunteers.

When I look up there I see an orchestra, I see a choir, and I want to it to sound dynamic like an orchestra or a choir should. I'm at liberty to do that here - I have a large room, an adequate PA, and a console that gives me the tools I need to shape those dynamics.
Rusty Trowbridge

Trowbridge runs the SSL L300 at Front of House, while Spencer Wells, AV Technician, takes care of the broadcast mix on another L300. "For our main services, there are anywhere from 100 to 130 people on stage," says Trowbridge. "We are 96 in, 64 out capable with our I/O, and right now we're running about 50 inputs from the orchestra, 12 Praise Team members, 12 choir microphones, and the Pastor mics. It's about 86 inputs in total.

"All of the headset, choir, and strings microphones are DPA, with Shure Wireless systems and L-Acoustics Kara for the main PA, and an L-Acoustics ARCS system for choir monitors."

SSL ML 32.32 Stage boxes with SuperAnalogueTM mic/line inputs provide the I/O, and these are connected to an SSL Blacklight II MADI Concentrator, which sends two redundant feeds to the FOH/Monitors L300 console and to the broadcast L300 console.

In addition to the FOH mix, Trowbridge's L300 provides about 15 monitor mixes. Orchestra sections share mixes, with a good number using iPads and the SSL TaCo Tablet Control app to control their own balance.

The music at Southcrest is contemporary, though arranged for its large choir and orchestra. "In other settings, the drums and the bass might be the real meat of the sound," comments Trowbridge. "...But here that's not really the case. I'm generally using strings, or a really nice piano to build the body of the mix. Drums and bass are rhythmically there to keep everyone together, but it's not ‘in your face’." 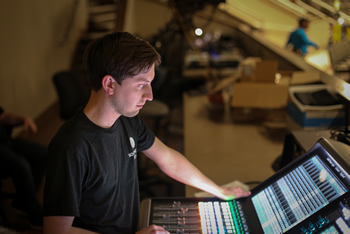 Rusty Trowbridge at Front of House.

The 12 choir microphones are arranged to 'zone' the orchestra for maximum control during the service, with the standard channel path processing in the L300 playing a major role - augmenting that control and upgrading the choir output through careful application of gates. Trowbridge: "The SSL gates have really helped... When we started gating the choir random people came up to me and asked what I'd done - all of a sudden, even to the untrained ear, the mix as a whole was much clearer. "

"I do keep things pretty dynamic. When I look up there I see an orchestra, I see a choir, and I want to it to sound dynamic like an orchestra or a choir should. I'm at liberty to do that here - I have a large room, an adequate PA, and a console that gives me the tools I need to shape those dynamics."

For Spencer Wells, the challenges in the live stream mix are very different. They start with breathing some 'live' back into the discrete mic feeds from stage. "You get the sound right from the bell, with no venue included," he explains. "You have these pristine preamps coming in and it's all completely accurate, which is awesome, but one thing that starts to lack is some life... But with the saturation options that I have inside the console - the VHD saturator, the tube processing on every channel path - they bring so much life back into the mix. It helps you feel like you're really there; that's one thing I really enjoy about the console… And the live stream is all console effects - I don't use any external effects or plug-ins." 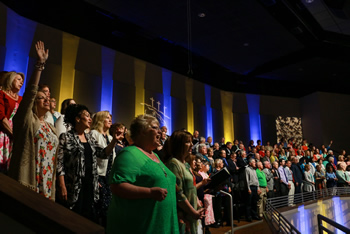 Voices are the focus of the music at Southcrest.

Wells make good use of Stems as submixes that rationalise the job of tailoring the streamed mix for a whole world of unknown devices. "At the output, I have to control dynamics a lot more than we do in the Worship Centre - use a lot more compression... It's not crushed but I do have to bring the dynamics down for someone watching on their phone, headphones, or iPad...."

Flexibility 'on the fly' is important to both engineers, as different people often take on different roles during a service, which means the routing and grouping systems on the console often get a good workout. The powerful combination of the SSL Stem Groups, the SSL Live console's ability to change routing and assignments and so on without interrupting audio, and comprehensive automation, means that almost nothing is impossible. "Soloists are generally part of the praise team, which I normally process as a single stem," notes Trowbridge. "...With its own reverb, EQ, and the stereo bus compressor. So, when they take their solo and they don’t need to be part of the praise team any more I can unassign them and send them a new monitor mix at the touch of a button."

A view from the stage.

The flexibility theme continues through the console's agile architecture. The operator can define numbers and widths of path types (Inputs, Auxes, Stems, Masters) from a central power pool and build large internal FX racks of high-end, super-low latency effects to create a new console for every job. This means that Southcrest Baptist Church can cater for a wide range of events - not just Sunday services. “On top of our Sunday services and mid-week rehearsal days, we're doing at least 100 other events during a year,” says Trowbridge - “Everything from one input to 90 inputs - weddings, funerals, conferences, concerts, musicals...

"The biggest thing for me has been the ability to walk up to the console and say 'this is what I want you to be today' - and I know it will be consistent; it will sound just as good no matter what I throw at it.”