Vienna, Austria - The Burgtheater - the Austrian National Theatre - is part of a group of three Austrian theatres, together with the Wiener Staatsoper (Vienna State Opera) and the Volksoper Wien opera house, and is generally considered to be one of the most important German language theatres anywhere in the world. As part of a recent upgrade to its audio systems, the theatre has installed two SSL System T networked production systems along with a building-wide, redundant Dante Audio-over-IP network and SSL Network I/O. The system was specified by David Müllner (Manager, Sound & Multimedia, Burgtheater), supplied by TSAMM Professional Audio Solutions, and installed by Klangfarbe GmbH. 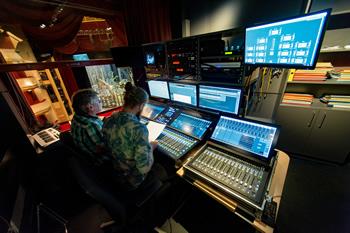 In the Audio Control Room.

Müllner started researching consoles back in 2012, looking for emerging technologies, technology trends, and workflows that might suit the theatre’s needs. The Burgtheater was an early investor in digital audio, and its previous digital console was nearly 18 years old by the time it was replaced, so the new system would have a long legacy to live up to. "As a repertory company, there is a different production on every day during our ten-month season," explains Müllner. "Those are chosen from a rolling repertoire of around 40 productions that include traditional drama and contemporary plays. We put on around 20 premieres during the year, all produced by us."

I can do whatever I need to do directly on that console and when rehearsals are done I can move upstairs and do the show from upstairs without doing any file transfers or synchronisation.
David Müllner

Müllner was especially interested in the SSL Live console range when it was released and says that, from a workflow perspective, he was "hooked immediately," though was ideally looking for higher path counts, and separation of control surfaces and audio engines. "I then found out about System T - a larger system with similar workflow to the live console, and based on the same core Tempest Engine, but with networked audio engine and control surfaces, and a huge capacity of 800 fully-processed audio paths."

For I/O, Dante had already made a big impact with Müllner, and so the native Dante capabilities of System T were another exciting prospect. "20 years ago, the old digital system already had 256 possible inputs and 256 possible outputs. We had decided that any new system should be at least capable of that. Of course, with Dante it's possible to have as many inputs and outputs on the network as you want... It gives me the freedom to develop an open-ended system so if we ever need more inputs and outputs, or a different monitoring solution, for example, I can plug anything in that speaks Dante... Almost every device coming on to the market now is Dante compatible, or has a Dante option available."

The Burgtheater currently has five SSL Network I/O SB 32.24 Dante Stageboxes (each with 32 mic/line inputs, 16 analogue line outputs and 8 digital inputs and outputs), four SSL SB i16s (16 mic/line inputs), and some additional output units from other manufacturers. Latency across the whole network has been set at 1mS.

There are actually two separate System Ts, on the same network. The main system consists of two redundant Tempest Engines, a 32-fader S500 control surface permanently installed in the control room on the 1st floor, and two T-SOLSA PC-based online and offline control systems - one with its own Fader Tile. The second system has a single Tempest Engine and a 'mobile' 32-fader S500 control surface that can be deployed anywhere in the Burgtheater.

Müllner explains that how they use these components depends entirely on that day's production. For some shows, the control room is ideal, though often for rehearsals the T-SOLSA system will be positioned in the auditorium behind the Director. "I can do whatever I need to do directly on that console and when rehearsals are done I can move upstairs and do the show from upstairs without doing any file transfers or synchronisation." The mobile system comes into its own for more music-orientated productions, when there’s a distinct advantage to having the full control surface in the auditorium during the show.

In addition, because both systems are on the same network and share the same Dante I/O devices, the theatre can potentially bring both systems to bear on a single production.

Amongst the other System T features that impressed Müllner, the integrated internal FX rack the 'augmented' standard path processing, and discrete fade times for snapshot transitions stand out as particularly important: "For us, having integrated effects is new," he says. "It is now possible to store everything in the show file, load it with the show file, and store changes in snapshots. From a practical point of view this makes a lot of sense... The less external gear I have to use, the less we have to do to load and run a show. 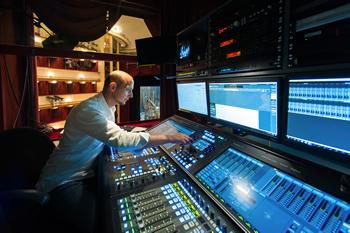 "Also, having two dynamics processes available to a signal path is very useful. I often need a compressor and a de-esser in the same path for voice processing. That's something that was very difficult before."

The fact System T is one of the only products on the market where fade times between snapshots can be individually specified surprised Müllner. "The old console had this, but now only SSL and one other (partially) has this feature. This is very important for programming shows... A fixed time is not very useful in the theatre."

The last word though, goes to the sound quality. The improvement was something that the whole team recognised from the first tests. "It is clearer," says Müllner. "You have to do far less with the EQ.

"This is definitely a thing that is specific to SSL. It is like you are opening a curtain - the fog goes away. When you plug a mic in, it sounds right. When you touch an EQ it's much more precise. Even when using external effects, there is an increase in the quality - hearing new detail in reverb tails is a great example."