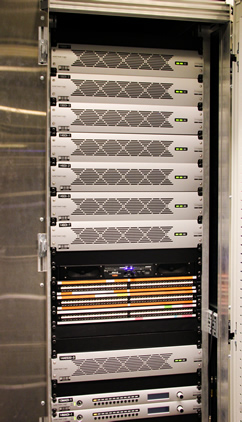 Another two studios - 12 and 15 are also connected to the Dante network via SSL Alpha-Link LIVE-R, SB 8.8 and MADI-Bridge hardware.

Both System Ts are running 24 hours a day, seven days a week, and 365 days per year. They're a core part of DR's breaking news transmissions as well as regular broadcasts on the DR1 and DR2 TV channels, which include four main programmes a day on DR1, and three programmes a day on DR2, plus additional political coverage and so on. Those control rooms are also used for larger broadcast events, such as mixing the Olympics coverage in 5.1.

The systems are responsible for mixing all master broadcast outputs, as well as all in-ear feeds, studio PA, and mix minus for live feeds. In a basic stereo news configuration at DR, each System T is using about 300 processed DSP paths, including 82 mono channels, 56 stereo channels, stems, auxes, mix-minus' and masters. though each Tempest Engine is capable of running over 800 paths each, so there is plenty of scope for even the most demanding productions. There is also extensive integration with the Studio's Riedel intercomm system.

Sound for short programmes are run entirely with Viz Mosart production automation control, and with System T’s Dialogue AutoMix functionality, while the longer programmes have Engineers at the consoles.