Three weeks after the broadcast, "Summer of the Band 2" scored 8.1 on the popular Douban social media website.  As one of the most anticipated programs this summer, it is a well-produced live music and variety show.  As a music show that places great emphasis on sound, the post-production for Big Band Season 2 had to handle more than 180 channels.

No matter what the program, in audio production the part of on-site OB (Outside Broadcasting, live radio broadcasting) is very important.  For a big and important job like this the on-site recording engineers gave themselves some strict rules to work by. 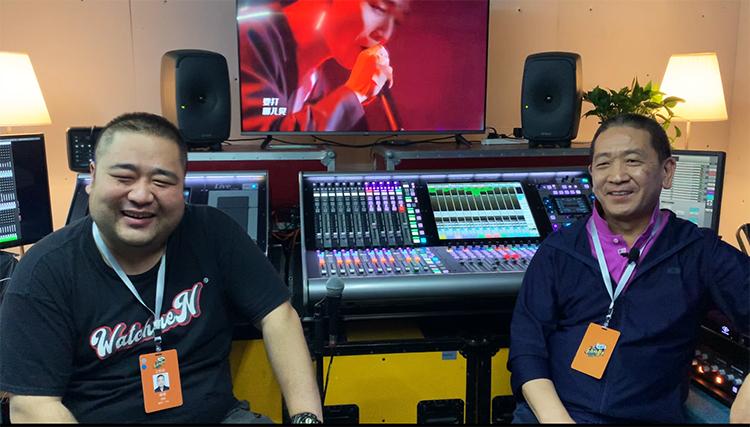 Compared with Live recording’s noisy venue, the OB room needs to be acoustically isolated. However, due to the limitations of the venue, not every OB room can meet the ideal standards of the sound engineer.  Therefore, for the sound team the most important task before recording starts is to choose the most suitable environment.

Yang Xu, the sound engineer in the OB room said "Last year's Big Band was the first time we co-operated with the sound producer Jin Shaogang…” Mr Jin is one of the most famous live sound engineers in China. “…we hope that it will improve and provide the best experience of ambient sound as possible and can integrate that into the music for the audience who were not on the live set.  It required us to do a lot of preparation work.  I would say if the first season was about completing the show successfully, the second season was about making it as perfect as possible.” 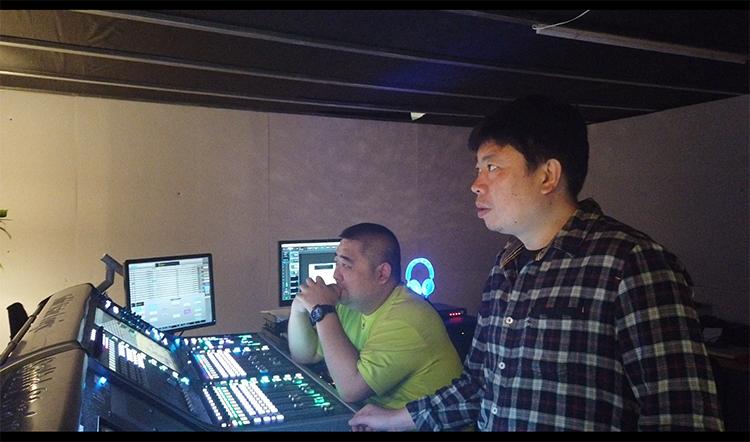 "As we didn’t have enough space in the first season, we could only choose a room on the fifth floor of the venue.  There was a big problem with sound insulation in that room, which created serious issues for us.  So this year we decided to solve this problem before recording, therefore a dedicated OB room was chosen, specified to a high standard and built." The most important function of the OB room for sound engineers is to let the sound be monitored clearly.  To do this, the sound engineer needs an extremely quiet environment, so sound insulation is particularly important.

The location of the OB room was personally selected by Jin Shaogang after his on-site investigation.  The room was far away from the live venue and not disturbed by the live sound.  The interior was substantially changed. It became a "room in a room" with careful acoustic treatment.

Mr Jin smiled when he said "Why is the broadcast sound so clean and controlled this year? It's because Yang Xu was not disturbed in the OB room. He was listening precisely, so he has better control."  After the renovation was completed, everyone was very satisfied, and it greatly improved the convenience of working in the OB room. 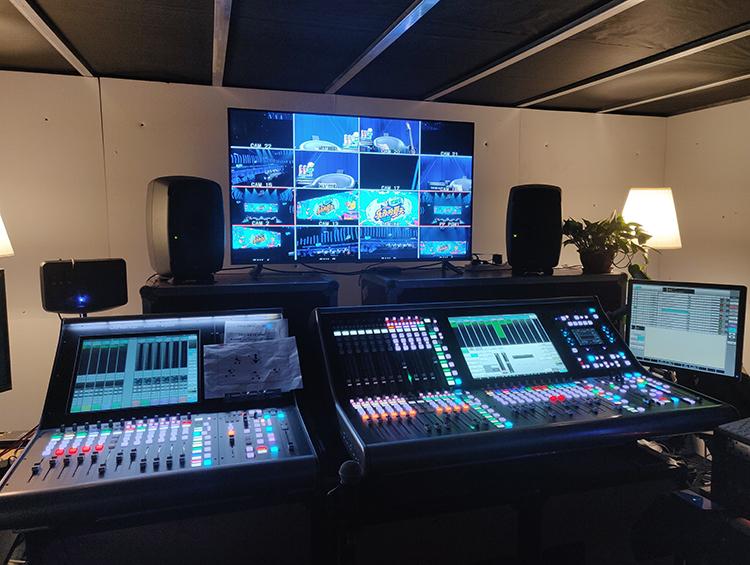 "It is impossible to isolate the sound at the venue, so it can only be done in the OB room. There is a lot of ambient and audience noise. If the sound is mixed at the venue, it may not be so accurate. But the OB room is different. Even very subtle audio differences can be heard clearly in the OB." Yang Xu said.

"After the renovation, the acoustic isolation here is about the same as that of a recording studio. We can monitor each sound in a good environment, and we can be sure which sound needs attention, which EQ needs to be adjusted, and whether the effects are over-compensating.  After troubleshooting, we will know how to solve any problem, such as whether to change the microphone or its position, these are problems that can be solved most easily in the OB room.” 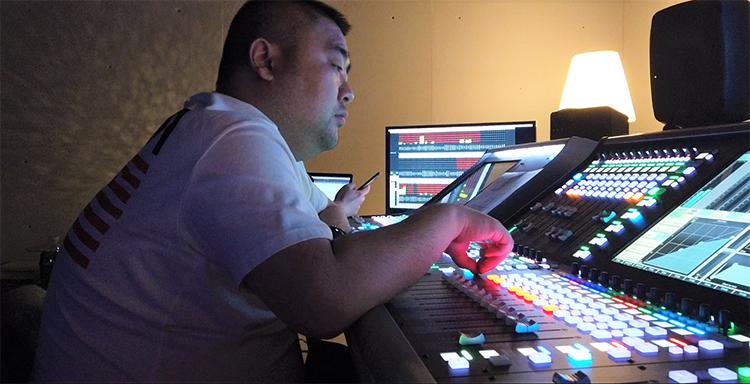 From this point of view, the sound engineer in the OB is "lonely", because he is alone to keep his hearing sensitive. However, although the work is lonely, the room can be pleasant and tidy and not just full of cables and equipment, there are even lush houseplants and attractive décor.

"I talked to Yang Xu about this issue. The work we do is related to music, and music is to make everyone happy,” says Mr. Jin with a smile.“A happy mood makes for excellent results!”

Serious and interesting, this is exactly the attitude towards music competition expressed in " Summer of the Band 2".

Equipment in the OB room is the “benchmark”

"Our entire OB room includes two Genelec 8351 monitor speakers, Solid State Logic (SSL) L550 and L100 consoles, UA APOLLO for effects and SSL FUSION for mastering.  Digital Media Technology Co Ltd (DMT) have given us a lot of support. They provided us with this equipment and sound field tests, so that we can relax completely and concentrate on the live OB work of the second season of Big Band.” 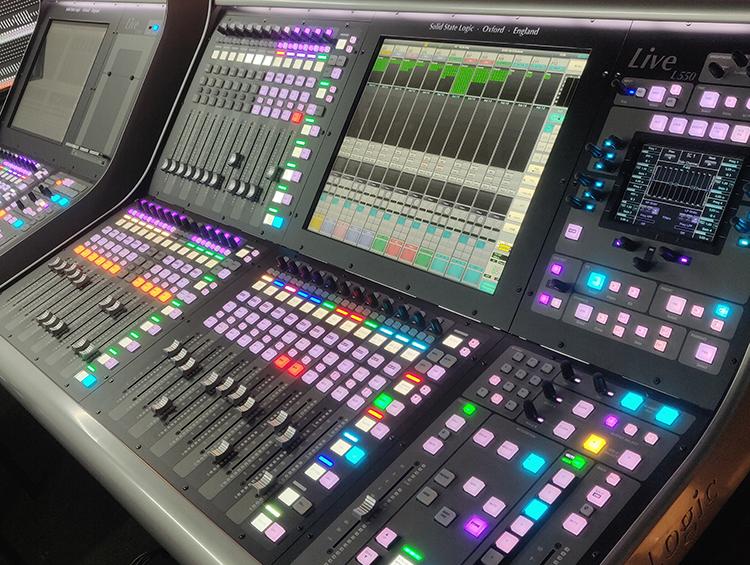 Yang Xu specifically mentioned the SSL console currently in use:

"SSL's contribution to popular music is huge. It has been popular since the 1980s. At that time, at least 80% of music was produced with SSL consoles. The sound of SSL is indeed a benchmark. I think SSL’s Live series of consoles retain the most classic SSL sound, which is equivalent to moving the recording studio to a live environment."

"Now we The Live series of digital mixers I saw are very rare to retain the most classic SSL technology, which is equivalent to moving the recording studio to the scene."

"This console has very densely populated interfaces, there are 16 pairs of MADI interfaces with redundancy.  It also has Dante, which is very convenient for recording.  For example, now we can record 192 tracks through MADI, with main and redundancy recorded at the same time. This only takes up less than half of the interfaces. In addition, it also has a MADI FX loop interface, which is very convenient to use with UA’s Live Rack to add plug-ins. The new version adds a lot of plug-ins and visual parameters to make my mixing faster and easier."

I use UA APOLLO for effects and SSL FUSION for mastering.  These peripherals are my favourite quick-to-hand equipment, especially FUSION.   It is very intuitive, easy to operate, and will soon have the frequency response and spatial feeling I like. I only need to send the mixed signals to the show’s second venue, the OB van and various lounges."

Yang Xu's careful selection of equipment is also a reflection of the high standards of sound requirements in the OB room.


From the creation of the room to the selection of equipment, it can be seen that the OB room for Big Band has adhered to the exacting standards expected for high production value recording and mixing.

A big production like this has many channels, Big Band exceeded 180 tracks. "In order to be able to identify the quality of the sound more quickly, I will first divide it into several stems, such as percussion, plucked, stringed wind, piano synthesizer, PGM and vocals, etc. Then we will have time for a sound check and I can identify and trim the sounds I receive."

They keep focus on the sound quality even facing a huge workload, and use the most appropriate methods to make the sound the best. Yang Xu said: "I will identify and trim the sound I receive, and if there is a problem, I will immediately find the solution. For the OB side, the most important thing is the problem of tone and colour. I used EQ to fix it before, but now we try to keep the EQ as flat as possible, and use the appropriate microphone to change the tone, so that the adjustment will be smaller." 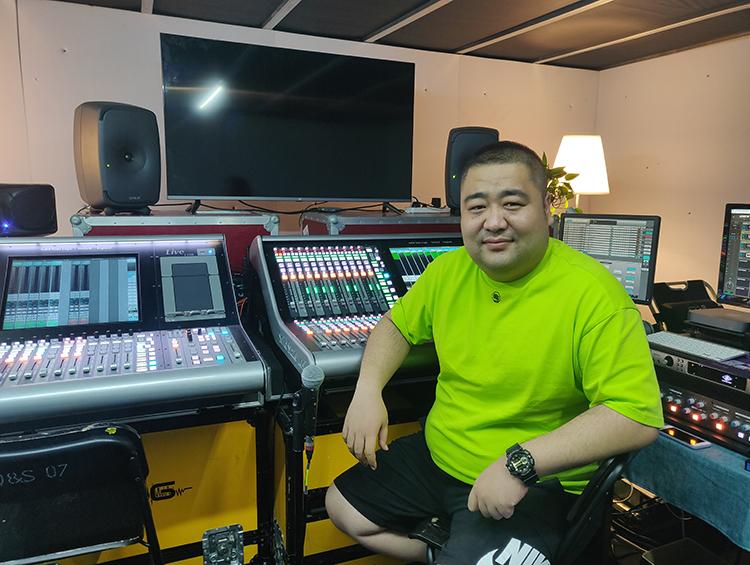 "The microphones we bought this year are perfectly suited.  In addition to the vocal microphones we use some head-set microphones such as the DPA 6066.  The mid-range is very full, so in the broadcast, the tone of the human voice is very clear without interference.  The next step is to mix through the SSL L550 mixer.  After each song is recorded, it is necessary to solve the problems of the song immediately, including the wedges and drum foldback.  If it needs to be adjusted, it will be repeated again until they hear exactly what they want.”

As the sound producer in charge of the whole show, Mr. Jin Shaogang emphasizes the importance of the  OB room:  “The studio audience is about 250, but there are hundreds of millions of people watching it online.  So the online audio should be completely accurate and is very important.  To complete such delicate and important work, Mr. Jin said that in the OB room, except for the sound of music, there are basically very few people talking.

Mr.Jin explained:  "This room is very disciplined with a working schedule accurate to a few minutes at worst and a few seconds at best.  Although they are only used as a reference sound for a broadcast vehicle, the sound represents the rhythm of the entire program. If the audio cannot be sent to the director, the director cannot respond, and he could not cut to the correct camera.   Therefore I asked that people do not enter into this room unless they were directly involved, nor people can chat in here."

"This room is a particularly rigorous, accurate to a few minutes and a few seconds. Although they are only used as a reference sound for a broadcast vehicle, your voice represents the rhythm of the entire program. The director, the director didn’t respond, and he couldn’t cut out this shot. So I asked this room that people in this room must never enter or chat here. The people in the OB room have already left the scene, and their spirits are concentrated here. So they won't have anything interesting." Teacher Jin explained.


The collision of disciple and personality


The work that is accurate to the second has to collide with the personality of musicians. Does it make the OB work difficult?

Regarding this issue, Yang Xu said that there is no established standard for sound, but he will give some professional suggestions.

"These things need to be communicated with the band.  In the early stages, we have to listen to the demos of their songs, understand what their songs want to express, and what the sound is they want.  We want to know that well.  After arriving at the venue and they play more loudly or differently then we have to communicate with them to make adjustments that are needed." 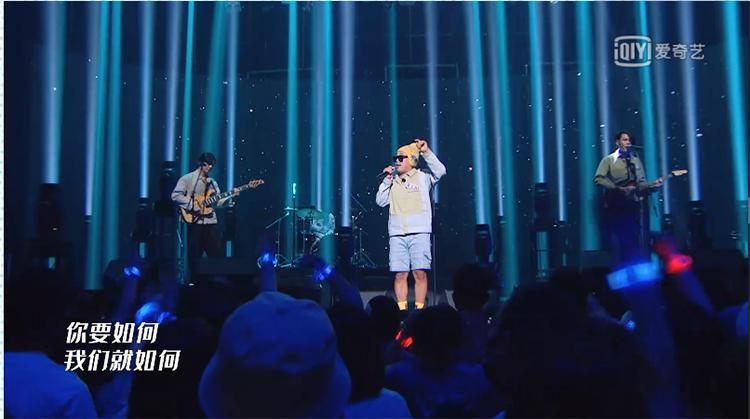 Jin Shaogang said that in fact the bands were very cooperative in sound production. He gave an example: "Some musicians are used to listening to the wedges.  In order to have fun, they will keep asking us to raise the gain.  But as a sound producer, I will explain to them that if the wedges are too loud, the microphone will pick up too much sound.  I suggest to them that if they don’t accept our opinions, their vocals will be difficult to adjust in post-production, and the final result will not be good.  When I explain it this way they all cooperate with us. They also know that these requests we made are for their benefit."


Strict preparations, careful equipment selection, and a disciplined working attitude combine to create the working ethos for Big Band Season 2 OB.  They want to do a professional job with passion and respect for sound. 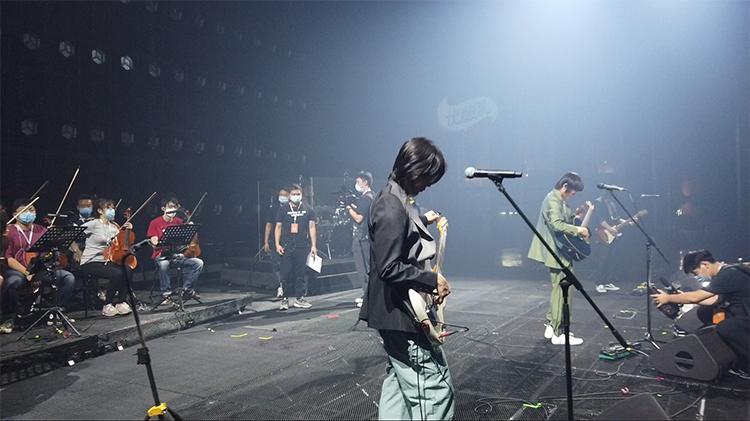 Yang Xu said that three months before the start of the recording, the working group started 3-4 meetings a week, meeting a large amount of band information and special requirements, and each audio station made more and better suggestions for the second season of Le Xia. Hope to make this show better than the first season.


"Finally, we just need to relax, do our best job, and make a contribution to the Chinese band." 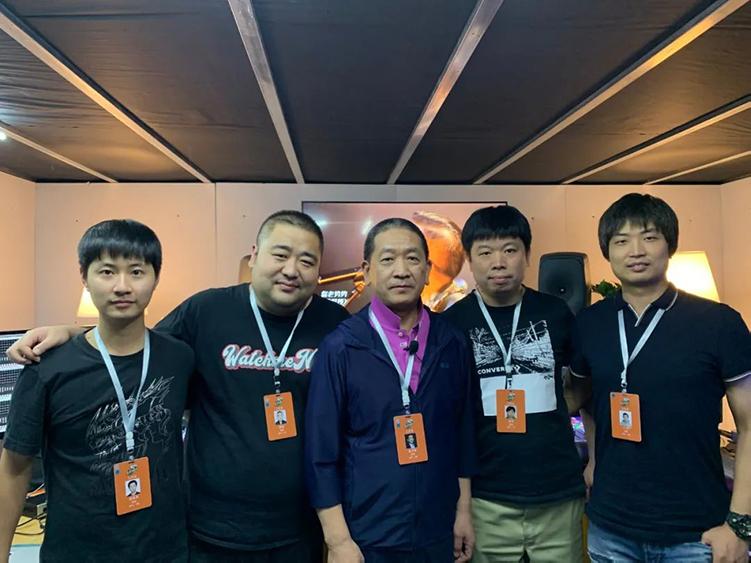