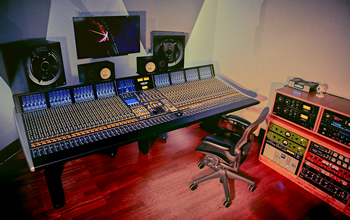 There were several aspects to Clarke’s decision to move to the Duality, both creative and logistic - though possibly the most appealing sound-wise was the additional flexibility offered by it's full-featured channels. Every Duality input channel comes with twin-curve SSL E and G Series 4-band parametric EQ, full dynamics (gate, expander, compressor/limiter), and Variable Harmonic Drive (VHD) preamps.

VHD introduces either 2nd or 3rd harmonic distortion or a blend of the two to the audio and brings a wide range of colouration to the clean SuperAnalogue Duality input. "I use VHD on most things actually - though subtly," says Clarke. "It gives things a bit of crunch or presence that's difficult to describe... that was a big selling point for me. It brings something to the table that I didn't have before... It's exciting."

It gives things a bit of crunch or presence that's difficult to describe... that was a big selling point for me. It brings something to the table that I didn't have before... It's exciting.
Wez Clarke

Clarke has a rack of favourite and familiar outboard in his studio for particular channels, and while the Duality dynamics have not usurped those, it has certainly enhanced his whole mix. "I use the outboard in conjunction with the desk dynamics. Though in fact I do tend to use console dynamics on almost every channel. Even if you just have it in the path doing a very small amount of compression, it does give a certain sound that is quite pleasing."

From Stereo To Beyond...

For most mixes, Clarke has a favoured layout for the console, which starts with the kick drum on the faders immediately to the left of the centre section, and the vocals to the right. All the drum stems are kept to the left side, while the right-hand-side continues with background vocals and the rest of the 'instrument' stems. Much of Clarke's source material arrives as stereo stems, which means that the ability to mix up to 24 stereo pairs is an important requirement. Whereas the AWS 948 has a 24-channel frame and a stereo mix mode for each channel, the Duality uses two physical channel strips for a stereo pair, which can be fader-linked (ganged) as required (includes Cut, Solo, Cue, FX, Insert In, and EQ In switching).

Clarke has been pleasantly surprised at how easily he has made the change: "I was worried about the mono faders, coming from the stereo faders on the AWS - which I was a big fan of. Strangely, I actually prefer the two faders now. Of course, I've worked on desks with mono channels since a very young age, which is probably why it feels natural. It’s almost like rediscovering a workflow that worked perfectly, before getting side-tracked by the convenience of in-the-box mixing during the late 90’s.

"I really love the Group Control Faders as well. I normally assign everything to those... The first group is kick drum, then snare drum, then hi-hats, then bass... it goes on like that. I do the levelling there - right in the sweet spot all the time." 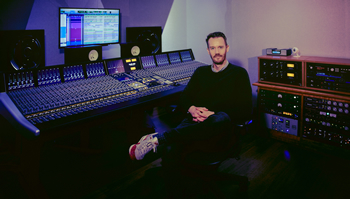 Wez Clarke in his London studio.

The Duality's centre-section Group Control Faders work like a a traditional VCA system where a group's master fader simply provides an offset gain for any channels assigned to it - though they can be used in Legacy Automation (Servo-Grouping) mode - controlling the mortised fader of each channel in the group.

Another important logistical advantage comes from the Duality's direct channel outputs, which can be fed from several points along the channel strip. In this case Clarke uses a post-fader send from each channel to print fader-panned stereo stems in a single pass - an important delivery requirement for most clients. Alternatively, there are 24-track bus outputs available with both Pan-To-Track and 5.1 modes which can be used for printing normally-panned outputs. "Printing stems is now a one-take, three-minute job as opposed to a two-hour job," comments Clarke. "Before I had to bounce each channel, soloed, one at a time. This saves a massive amount of time."

In general, mixing on the Duality has given Clarke a bigger palette, and has shed new light on his creative process: "I don’t know why, but it brings more out in me... It’s a lot of fun mixing on this. You can mould things more, and believe it or not, it has sped things up. You might think it would have slowed things down, but the recalls are fast and everything is to-hand."