The MADI-Bridge is a broadcast specification bridge between the MADI audio format and Dante. It is a bi-directional interface that can deliver 64 channels @ 48kHz (32 channels at 96kHz, 16 channels @ 192kHz). MADI-Bridge ‘Split Mode’ enables 2 x 32 channels @ 96kHz streams to be merged to form a single 64 channel @ 48kHz stream.

MADI-Bridge also features bidirectional sample rate conversion between any asynchronous sample rates, from 44.1kHz to 192kHz. MADI-Bridge features redundant PSU, MADI and IP Network ports and in addition to the inbuilt clock redundancy options in Dante Controller, the MADI-Bridge also includes a pair of redundant sync inputs for use as a self-redundant Dante Grand master clock. 32bit MADI control tunnelling allows a pair of MADI-Bridges to be used to pass audio and user bits (including control data) of a whole MADI stream across a network. 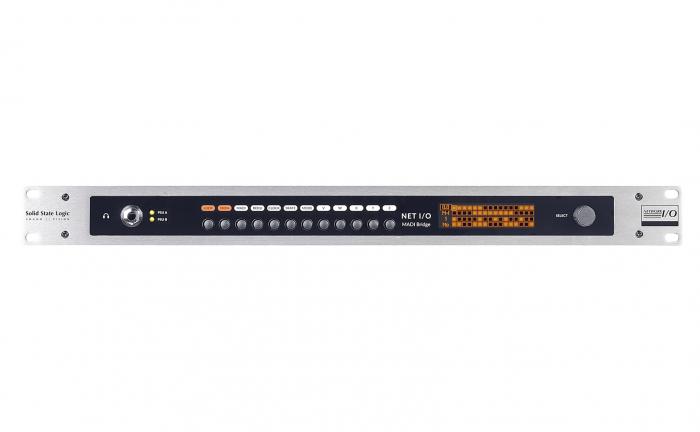 Software downloads for this product are delivered from within your 'My SSL' registered user profile, accessed via the link in the top right corner of this page. You will need to register if you want to access software updates.

Designed for fly-pack and OB audio applications, the S500m console delivers maximum control in a lightweight and reduced form factor.

A versatile combination of mic/line and digital I/O. Explore the following range: the A16.D16, A32, D64, and GPIO.

Designed for use on any Broadcast studio floor, venue or recording room. SSL Network I/O Stageboxes allow for easy deployment of feeds where…