Solid State Logic Bringing in the New at Eldorado

Eldorado has a long and illustrious history in the Los Angeles recording scene. It was founded in 1954, located across the street from Capitol Records, and even though it has changed address several times since then, it has maintained an enviable position as one of the go-to facilities for both top-flight, and up and coming artists in LA. Its latest location is Burbank, in a ground-up facility designed and built by Steven Klein (Sound Control Room) with a generously sized Control Room A and main live room, alongside another five isolation areas and hospitality facilities. 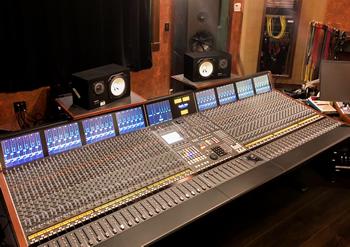 The Eldorado gear list is an incredible thing, as most of the equipment collected since the early days has been carefully maintained and is still available to clients, including sought-after, early serial number outboard units and classic microphones.

The new 48-channel SSL Duality δelta console is in Control Room A and replaces the previous SSL XL9048K. Rob Strickland is the Eldorado Owner and Studio Manager and sees the Duality as a step forward for the facility in several areas: "We're very pleased to have this console," he says. "It offers a lot to our clients and handles modern workflows much more efficiently. Everybody has DAWs in their production processes and everybody is excited about bringing in their rigs and hooking them up to the new console... The fast recall and the ability to jump between songs as quickly as we can have been wonderful."

The SSL Duality δelta console has a hybrid approach and combines a traditional analogue path and signal processing along with DAW control and integration, as well as the δelta-Control plug-in-based console automation technology. "One of the nicest things is that you don't have to think about the console," notes Strickland. "It just works. It's there, it does what you need... I know there is a sound, if you want to dial it in, but the transparency of the whole thing helps with your flow; it's an invisible helper… And getting rid of the heat and the electric bills of the last console is also very much appreciated!"

Eldorado now balances its new modern workflows with exceptional customer service and some of the best, most sought-after spaces on the West coast of the US. "We're one of the few studios in Los Angeles where you can work at our studio and have the run of the entire place," Strickland explains. "That's great for large tracking dates.

"The generous size of Control A room means that band members have plenty of room to track, and simultaneously offers them the luxury of having a Yamaha C7X grand piano-also in Control Room A- at their disposal as well as great sight lines to the other rooms.”

No doubt, Eldorado Studios - and the new SSL Duality - will inspire another generation to make amazing music.