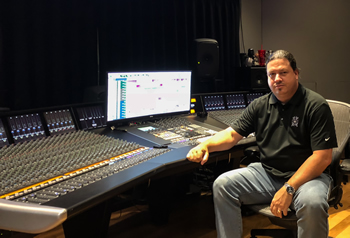 Ty Fy Studios is an audio production company with an impressive client list and a wide set of skills spread across a team of audio engineers. They can take tackle every aspect of a client's project, from start to finish. The company's main base is the Disney Roy E Production Center where they are responsible for the audio content in Disney's theme park and Cruise Line attractions.

The fact that I can reach up and dial in the best amps and EQs and compressors in the world, multiplied by 48, has been wonderful. I don't think I've patched in an outboard EQ or amp in since we've got the thing!
Dan Fontana, Ty Fy Studios.

Fontana usually occupies Studio A, with the Duality Pro-Station and its large live room. Dan Scott is in Studio B, Tommy Bailey is in C with the new 24-channel console, and Stephen Marro uses Studio D. "We do anything from simple voiceovers to full-on Broadway-style productions," says Fontana. "And we wear a lot of hats - as recording engineers, editors, sound designers, composers, and more... We have to be ready for anything."

The Duality in Studio A is used for both tracking and mixing, and as the first of the facility's two SSLs to be installed, made the initial impact: "It really changed our lives in the studio. Before we had this analogue front end, our mixes were okay, of course, but as soon as we were able to split our mixes out on the 48 channels, using the SuperAnalogue Mix bus, everything just lit up - sprinkled analogue magic... We are now using the SSL for everything, which is why we bought a second one!"

Fontana attributes much of the console's usefulness to the flexibility of its channel strip. "The console has consolidated my workflow and made my job a lot easier.” he explains. “The options on the channel strip - on the amps and the harmonic drive circuit, and on the EQ and so on are fantastic. The fact that I can reach up and dial in the best amps and EQs and compressors in the world, multiplied by 48, has been wonderful. I don't think I've patched in an outboard EQ or amp in since we've got the thing... We could have a sale and buy another console."

The Studio A live room has a capacity of about 30 musicians, which works for most projects and enables Ty Fy to track whole orchestral sections where necessary. Recently, the team has also had tracking sessions in LA, Nashville, and London with full orchestras. For Fontana, those sessions, often with additional material tracked in Florida, bring home the value of having a high-end tool to come back to at Disney HQ. "It's been fantastic to be able to go to a studio like Abbey Road or Air Lyndhurst, then be able to split that out right across the Duality."